The Barely There Project 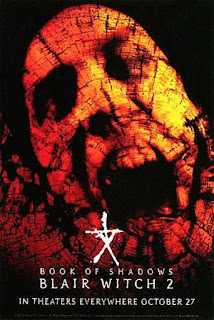 It’s all happening! The Woods, the upcoming found footage flick from Adam Wingard and Simon Barrett (You’re Next, The Guest) has been revealed to be an official sequel to The Blair Witch Project! The newly retitled Blair Witch looks incredible, and I’m excited to revisit that 1999 classic through the goggles of 16 years of progress.

…Wait a second. Why did I say 17 years of progress? Could this be? Was there a Blair Witch in 2000? Yes folks, today we’ll be exploring the quickly assembled, quickly forgotten sequel to The Blair Witch Project, entitled Book of Shadows: Blair Witch 2. In excitement for the new film, I popped in this DVD (which is a double disc containing the film’s soundtrack on the flipside, because the millennium was awesome), ready to complete my Blair Witch education. 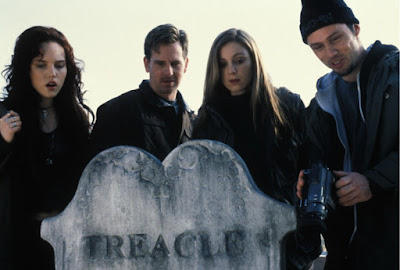 In Book of Shadows: Blair Witch 2, there’s even less Blair Witch than the first film. But that’s OK, because there’s also no Book of Shadows, so at least things are fair and square. So here’s what happens. The backwater town of Burkittsville, MD suddenly has a booming tourist population thanks to Blair Witch Project fans who want to visit the site where it took place. One such tour group includes Stephen (Stephen Barker Turner) and Tristen (Tristine Skyler), a couple who are writing a book about the phenomenon; Erica (Erica Leehersen), a happy-go-lucky Wiccan who wants to commune with the “misunderstood” Blair Witch; and Kim (Kim Director), a goth psychic because why not.

Their tour guide is Jeff (Jeffrey Donovan), a local with an entrepreneurial flair. The group camps out in the ruins of the Rustin Parr house, and wake up after blacking out. A medical emergency cuts their trip short, and Jeff takes them back to his house, which is an abandoned factory. Seriously, 2000 was just a great time to be alive. While going over footage they taped, they notice strange anomalies that might be linked to the murders of another tour group that very night. Tensions flare among the group, and their paranoia only grows as supernatural occurrences begin to haunt them. 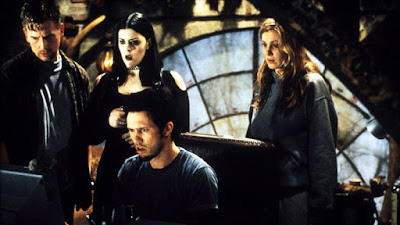 And that’s how we ended up with a Blair Witch movie that only spends like 20 minutes in the woods.

Writing a review for Blair Witch 2 is like writing a eulogy for the horror genre itself. It’s like a smear campaign for the original film, which certainly doesn’t need the help, given its tendency toward being not that great in hindsight. But you don’t need more than two seconds of separation to tell that Book of Shadows is a stinker.

With an expanded cast, a traditional shooting style, a score, et cetera, et cetera, Book of Shadows was clearly going to cost more money than the infamously thrifty original. I assumed from the tinny TV movie vibe that it was probably operating at a comfortable $1 million as opposed to the original’s $600,000. Buy do you want to hear what the budget on this sucker was? Reader discretion is advised. You can’t unsee this number: $15 million. That’s. Bananas. There’s no excuse for this movie looking like something you scrape off the bottom of your shoe after a visit to a landfill. They must have been putting those actors up in the f**king Ritz, because not one cent of that budget is onscreen.

The only genuine attempt at horror in the whole thing is a fistful of those goofy flash cuts that 90’s horror liked so much, and literally about 23 seconds of a totally arbitrary ghost girl who is never explained. Well, I can explain it. The producers were lent a tape of Ringu by one of their much savvier friends. Then the rest is just bottle episode mayhem, with a harried ensemble bouncing around a single location and over-emoting like their mother is in the front row with a camcorder. 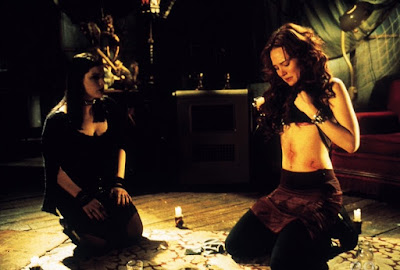 Although, come to think of it, camcorder footage would definitely have been more faithful to the original.

Deep breath. OK, Book of Shadows isn’t all bad. The first act is even decidedly pleasant if you approach it as a time capsule of the loopy fringe cultures of the early 2000’s. Kim’s character is introduced taking a nap on a grave, for crying out loud. This cheesy charm matches up with some genuinely decent quippy dialogue for a solid stretch of about 20 minutes. That promises a bearable, maybe even recommendable movie before it all crashes and burns. And Tristine Skyler at least is up to something fun and mildly creepy in her performance.

Faint praise is still praise, I guess, and I’m glad this movie had anything to offer other than muddled editing, community theater effects, and a complete lack of fidelity to the Blair Witch property. I’m not sure these people even watched the first movie. Book of Shadows feels more like a sequel to the “Smells Like Teen Spirit music video than anything. Avoid this movie at all costs, unless that cost is free and you’re bedridden with a fever.