In which I share mini-reviews of two comedies I watched over the course of a weekend with Sergio. He fell asleep during both of them, but I was only upset about it once. The other time I was jealous that he managed to escape. 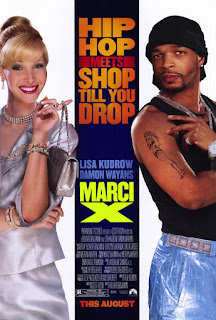 A Jewish-American heiress struggling to protect her father’s reputation attempts to bond with an out-of-control rapper who is tanking his music label.

I love Lisa Kudrow. I think she is an underappreciated comic genius whose work on Friends was just the beginning of a career that included the farcical heights of Romy and Michele’s High School Reunion and the caustic, improbably hilarious The Comeback. But there’s a thing that happens when the peak of your fame was in the 90’s. Somehow, some way, the fates will conspire to dump you into a project like Marci X, a film that makes Soul Man look like a carefully thought-out racial tract.

The film is such a gargantuan miscalculation that it overflows the “offensive” reservoir almost immediately, spilling over everything until it pools around the “adorably quaint” drain. This might be a more effective defense if it had come out 43 years ago instead of 13, but it’s a perfect time capsule of Hollywood’s most embarrassing proclivities: Lisa Kudrow raps in the movie, you guys, and it is tremendous. If you approach this movie as a huge slice of camp rather than a film attempting to reflect any sort of truth about any ethnic or minority culture, it becomes a little easier to swallow. You’re still ingesting a whittled-down turd, but at least you’re not choking on it.

The real troubling thing is that I had so much fun watching Marci X. It’s a truly ludicrous movie, and its ability to completely ignore every last stricture of logic and decency makes for a madcap hullaballoo of completely unpredictable, off-the-rails filmmaking. It helps that pretty much everyone in the cast is genuinely talented. Damon Wayans might not be operating at the top of his game, retreating into half-assed, breathy line deliveries like a turtle hiding in his shell, but look at the comedy cavalry that’s assembled: Kudrow, 30 Rock’s Jane Krakowski, a very young Matthew Morrison, Christine Baranski, Richard Benjamin (who also directed)… No, it’s no Ghostbusters line-up, but they’re charming performers who convert a surprising amount of material into genuinely fun humor.

Marci X is probably at its best when lampooning one-percenter socialite culture, not only because these moments are free of the lingering shame residue that comes any time the film even glances in the direction of hip-hop, but because it’s intentionally, satirically, successfully amusing. These upper class bubbleheads parade around disabled children at charity balls, assume they understand minority plights even better than the minorities do, and generally attempt to solve all the world’s problems without realizing that they are one of them. It might be low-hanging fruit, but they pluck it with vim and vigor.

Of course, in the third act the plot loses its goddamn mind and spirals blindly down a hundred narrative dead-ends before just sort of giving up and plastering over its missing ending with another ill-advised rap sequence. It’s a steaming bowl of nonsense, but the music (co-written by Marc Shaiman of Hairspray and Smash) is an apt stylistic parody of the worst of late 90’s pop (the flick may have premiered in 2003, but it was made in 2000 – I wonder what could possibly have held them up?), the fundamental misunderstanding of the rap scene is pitifully endearing, and the secret abundance of genuinely good jokes hiding in the wings make it a must-see masterpiece of Hollywood crap. 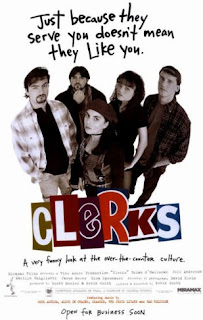 Two clerks at a convenience store and a video store bond over the course of an extremely long shift.

Indie flicks were such a Thing in 1994. Pulp Fiction immediately became the biggest movie in the galaxy and Clerks toddled along to prove that anyone could make a movie. Literally anyone. Kevin Smith was a convenience store clerk from Ass Nowhere, New Jersey, and he made himself a megahit using a cheap camera on his off-hours. It’s a truly inspirational story, and it wouldn’t have worked if Smith wasn’t an incredibly savvy creative mind, but damn if Clerks isn’t a slog.

Fans of cheap movies are used to forgiving such films their many technical flaws, but Clerks isn’t even a movie. It’s a staged reading of a screenplay. The screenplay is admirably sharp, to be sure, restaging Dante’s Inferno as a miserable day shift and casually tossing off some incredibly tight comic vignettes as it putters along. But there’s literally nothing else to Clerks. The camera is either hibernating on its tripod or whipping back and forth between its subjects like a rabid squirrel. The black and white cinematography is not a choice but a necessity, and it makes a drab, uncomplicated set look even less interesting. Which I guess emphasizes the theme of the narrative, but that’s certainly not on purpose.

With the script front and center and nothing waiting in the wings to prop it up, every tumble it makes violently topples the film. And let me remind you, this is the first script Smith ever produced. It’s inherently composed of stumbles. The dialogue tends to be both overwritten and underperformed, women are treated like interchangeable hogs on a spit, and certain chapters (oh yeah, the film is divided into nine segments with different titles) just dump a bucket of words on your head, hoping there’s a joke in there. And I’m sorry to say it, but Jay and Silent Bob are not commanding presences at this juncture in their lives.

There’s some genuinely funny stuff in Clerks (my favorite being an anti-smoking advocate inciting an in-store riot), but when it lulls as most comedies tend to do, there isn’t a white of redeeming quality to lean on. It’s a treacherous slog to get to the good stuff, and the good stuff is too laconic to really boost your energy and recharge your interest. It’s a clever debut film, but it wears its amateur status on its sleeve, which it then tears off and drapes over its entire face.