In which we release mini-reviews of two fairly recent comedy films that managed to pass me by until now.

Pretty much any movie starring Seth Rogen between 2007 and 2010 was created explicitly to cater to the greasy, speckly daydreamers of the world who wanted to believe the busty blonde down the hall would find the lovable oaf buried deep beneath the Cheeto dust-crusted exterior. It’s the kind of nerd-fulfillment fantasy Judd Apatow has been trafficking in since day one, and the only person I can think of who is more suited to bring that icky feeling to life is Kevin Smith. …Enter Kevin Smith.

The film crows over the female form like a cackling magpie, exempting men altogether from its bone-chilling leer. This is a movie strewn with completely naked women that treats its one full frontal male scene like it’s something shocking and disgusting. Male perspectives in sex films are just the worst, aren’t they? Despite Banks’ attempt at creating a shaded, multi-dimensional human being, Miri is merely a prize to be won: a fun fair sack of flesh, blood, and mammary glands.

And Zack and Miri treats its minor characters even worse, if you can believe it. Craig Robinson is forced to contort into every stereotype in the book, and some that have been scribbled in the margins (whipped sitcom husband, wise best friend, irrationally angry black man), and the rest of the porno cast are given no introduction, with personalities ranging from one-note (Jason Mewes’ clueless sex fiend) to topless window dressing to “no seriously, who are you?” Then they’re sent floundering through a fundamentally broken story with a distended first act that swallows half the run time, a bungled time jump that kills the momentum at a climatic juncture, and a central relationship that vomits out manufactured filler drama in an unending stream. There are such deep cracks in the narrative here that James Cameron wants to make a documentary exploring them. 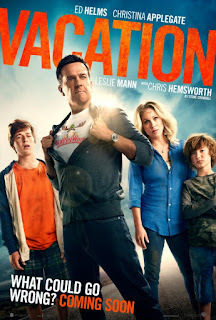 A now grown-up Rusty Griswold decides to take his family on a road trip to Wally World in an attempt to smooth over their problems.

Now, here’s a movie I never thought I’d see, let alone like. A belated straggler from the 2000’s remake boom (seriously, other than Ghostbusters, who’s making remakes anymore? Remakes are so passé, sequels are what’s In this season), updating material that nobody has given a passing thought to in over a decade, Vacation seemed like the most obnoxious kind of family comedy. And to be honest, it doesn’t really try to be anything different. All the scatological gags, picked-clean sexual references, and oddly violent slapstick that you might expect are front and center, but Vacation prevails in spite of that.

I blame the cast. Ed Helms has always been a reliable comic presence, even if he doesn’t stand out in a sea of funny 40-something white guys. And he’s surrounded by a bevy of delightful professionals, first and foremost Christina Applegate. I’ve never paid much attention to Applegate beyond her cameo appearance on Friends, but she’s utterly brilliant here, wrapping up the classic Apatowian pent-up manboy archetype within the guise of a tired suburban mom. And then we have, packed in like sardines, Leslie Mann, Charlie Day, Caitlin Olsen, Michael Peña, Keegan-Michael Key, and f**king Chris Hemsworth, who Ghostbusters has taught us is a bona fide force of nature.

This cast elevates the mostly generic material, making it funny enough that when the script hits its patches of actual genius, they don’t seem out of place. The family car is a bubbling fount of hilarity with its endless absurdities and M.C. Escher-esque design, the young brothers are a wonderfully mismatched pairing, and there is a spot of psychosexual terror that cold-cocks your funny bone. It’s not highbrow, to be certain, but there are actual laughs here - laughs that Vacation comes by honestly, and that is a remarkable achievement.