In which we explore mini-reviews of movies my parents chose for me to watch. 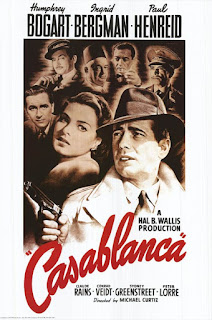 A tavern owner in Morocco discovers that his ex-love has arrived in town with her husband and he has the means to help them escape, should he choose to let her go.

Man, I don’t even wanna touch this one. Casablanca is such a minted classic, even by regular people who think Citizen Kane is boring, that I was nervous about how I would receive it when I finally buckled down and watched it for the first time. And I have a notoriously cold heart when it comes to romance films. It might just be the fact that there tends to be a gulf between me and onscreen couples in terms of both sexuality and approach (if you stand outside my window in the middle of the night with a boom box, I will throw things at you until you go away because I need my sleep, dammit), but love movies need to clear a high bar before they even have a chance of touching my icy heart.

Casablanca almost gets there. The romance thrums and thrives in the chemistry between Humphrey Bogart and Ingrid Bergman, but it’s far more present in the performance than its actualization. In their interplay, you get a perfect sense of a past Great love gone dark, but when they actually show flashback scenes of this supposed Great Love, frankly I’m not convinced. Perhaps it’s the toothless, Code-neutered interaction that dampens their physical attraction or the rather bland staging of their France apartment, but this romance only flourishes wen it’s dead.

But beyond that, Casablanca is, obviously, fantastic. Boasting a surprisingly funny script for a film – especially a drama – of its vintage, it’s a very layered piece that combines a patriotic wartime morality play with one man’s romantic struggles, played out over the various dives and skeevy locales of the border town Casablanca. It drops iconic lines like Liza Minnelli sheds boa feathers, which is even more remarkable considering that it was just a cookie cutter studio picture with a script being constantly rewritten as they shot it.

It’s incessantly remarkable how well this film works, and especially how well it still holds up today. Its dynamic lighting scheme forgives even its most ludicrously stagey setpieces, and the actors imbue their characters with personalities that stretch far beyond the scope of the screen. I’m going to leave it at that, because nobody needs another film blogger yammering about Casablanca, but I’m definitely glad I watched it. 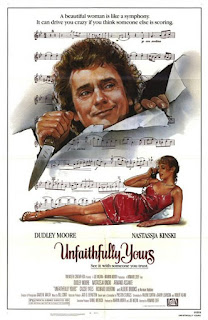 When a famous conductor suspects his much-younger wife of cheating, he hatches a plot to murder her and her supposed lover that goes wackily awry.

The 80’s were a weird time for comedy movies. Despite an abundance of classic teen movies and high concept comic gems, there was also a massive vein of throwaway flicks to beef up video store shelves. One of these is Unfaithfully Yours, which takes a sheaf of fairly well-respected actors and applies them to a sitcom premise stretched to an unfathomable length. While Unfaithfully Yours could have been a good Halloween episode of Three’s Company, the endless padding it requires to reach feature length makes the tone of the dark comedy go haywire.

This is a movie that couldn’t be made today, at least to its exact dimensions. It leans so heavily on chauvinism and misogyny to drive its main character’s motivations that hopefully anybody in 2016 would see right through Dudley Moore like they have X-ray eyes to find the spiteful goblin he really is. It is massively unpleasant to spend time with this character, who is willing to straight-up exterminate his wife over a series of misunderstandings. This type of storyline could be played for laughs if the tone was managed properly, as it is in the opening monologue of the film, but the script seems unwilling to admit that its protagonist is a genuinely awful person.

Instead of harnessing It’s Always Sunny in Philadelphia’s type of misanthropic comedy, Unfaithfully Yours takes a stab at Two and a Half Men by way of Alfred Hitchcock. Dudley Moore does a fine job of drawing physical humor from his character’s incompetence, but there’s only so much time I can spend with him before the film’s cheery attitude drives me to madness.

This scenario that has already run long endlessly unspools with an extended dream sequences that is then slavishly repeated in “reality.” It’s a tiresome tactic, but the really frustrating thing is that Unfaithfully Yours could have been truly great if it was a little less hammy and tipped more toward the darker, Death Becomes Her side of things. 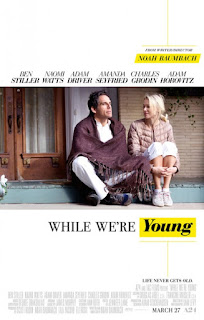 A bored middle-aged couple befriends a young hipster couple who give them a new lease on life, but not everything is as happy as it seems.

Don’t you just love comedy movies that don’t really have any jokes? Aren’t they just the best? Noah Baumbach certainly seems to think so. I suppose you might call While We’re Young a “dramedy,” but the drama half is so navel-gazey and the comedy half appears so infrequently that it’s just a “…”

A too-obvious attempt at satirizing aging dreamers too afraid to commit to their goals and the self-conscious hipness of youth culture, While We’re Young undermines itself by constantly pointing out what it’s doing. Whether it’s a pointed, inauthentic echo plastered over a key dramatic line that made me laugh out loud or the endless epigraph that opens the film using practically an entire scene from a play (this also showcases Baumbach’s lack of control over his visuals), While We’re Young is so exuberantly excited to share its trite ideas that it smothers them.

It’s a shame, because when While We’re Young is funny, it can be damn hilarious. A potential investor played by Ryan Serhant is one of the best broad comedy characters in years, with the snappy line deliveries of a young man with too much confidence and too few brain cells. A lot of side characters and little moments shine here, at least justifying the “-edy” ahlf of the portmanteau after much effort. The most consistent comic element is probably Adam Driver, whose performance precisely captures the physicality of a twee, hopelessly pretentious hipster douche. Maybe the character isn’t too far form his wheelhouse, but it’s a genius bit of over-the-top nonverbal acting that goes a long way.

But other than that, While Were Young is a bit of a dud. Stiller and Watts, as the older couple, are appropriately bristly, but nobody outside of Driver and Serhant is doing standout work here. The nuggets of comedy buried in the film make slogging through the drama worth it, but I’ll be happy if I never even have to think about watching this film again.