Popcorn Kernels: We're Five College Students On Our Way To An Old Abandoned Cabin In The Woods

For this round of mini reviews, let’s get back to basics by trekking to a secluded area where there’s no cell phone reception. It’ll be just like the olden days! I hope our car doesn’t break down.

The Cabin in the Woods 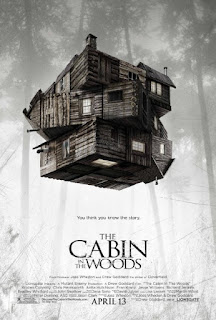 For our podcast episode, featuring an in depth review of Cabin in the Woods, click here.

Five college students vacation in a secluded cabin where they are beset by a zombie redneck torture family.

The Cabin in the Woods does for cabin in the woods movies what Scream did for slashers, although it flips the script. Where Scream was funny because the hip 90’s teens were aware they were in a horror flick, the bronzed babes of Cabin in the Woods are funny because they have no idea they’re in the middle of a movie. If you’re not into midway spoilers, here’s where you jump ship. You see, the horror movie scenario is being manipulated by office workers intent on making sure everybody but the virgin perishes.

The humor comes from the absurdly casual manner that these men and women orchestrate teen destruction as if it were a pencil pushing day job. Unfortunately, though the teens are entertaining thanks to a snappy script co-written by Buffymeister Joss Whedon, this renders the actual horror story pretty rote and pointless. Every time we return to our campers (including a pre-Thor Chris Hemsworth sporting the best hair of his career), the sparkle fades somewhat until we can return to what really drives the narrative.

However, a dimmer glimmer is still a glimmer, and Cabin in the Woods never stops being a fun tromp through the flattened brush of the horror genre. It’s far more comedy than horror, but a few atmospheric scenes do send a tingle down the spine. But where the movie really triumphs is in neither scares nor laughs, but rather sheer cleverness. The construction of the film is so elaborately detailed that it’s hard not to just sit back and marvel at its postmodern perfection.

This is one film that certainly demands a second viewing, because the flavor of the first half changes tremendously given the context of the finale. In essence, The Cabin in the Woods is two different films, with more subtleties emerging from the woodwork upon rewatch. And depending on how much moral fiber is in your diet, you might just switch sides. In a way, CitW is like a football game or a Twitter feud, with equal fun derived from rooting for either team.

I do wish the zombified antagonists were a little ore interesting and the deaths a little less indifferent ,but these complaints are heartily addressed (and then some) by a gonzo finale. It’s just plain an exuberantly fun movie, no two ways about it. While I’m certainly a little perturbed by the movie’s eagerness to indict horror viewers for not abhorring the violence of the genre, it’s nevertheless an infinitely witty twist on the genre that pushes meta horror to the next level. I’ve vacationed in this cabin many times before and I wouldn’t hesitate to do it again. 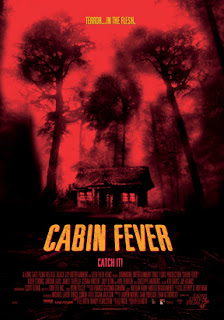 Five college students vacation in a secluded cabin where they are beset by a nasty flesh-eating virus.

I genuinely liked this movie for about five minutes, which is a pretty decent record for an Eli Roth picture. The characters seemed vulgar but kind, the humor was licentious but fun, and the zany atmosphere was settling in nicely. Then Eli Roth remembered who he was and the whole thing went straight to hell in a severed hand basket.

Above all else, Roth has a talent for writing venomously irritating douchebags, a skill he displays right from the get-go. Once you have a chance to get to know them, the characters populating Cabin Fever are downright nauseating. Their already trite dialogue (“safe sex” is a quip that wouldn’t pass muster in a Leprechaun movie, a franchise that had two straight entries that took place “in da hood.” And those were the better ones!) quickly runs out of steam, mutating into a sick competition to see who can pointlessly shout the F-word more times. It’s not a script so much as a laundry list of groundless obscenities. Not a single conversation can go by without somebody bursting into a rage and calling somebody a slut, whether they’re talking about killing a man or debating their favorite beer brands.

Look, I’m no Puritan about language. I’ve seen The Big Lebowski, I can handle a little cursing. Hell, that film is a monument to the four-letter word. But there comes a point when the cussing drowns out the script, the result of an amateur director looking to shock but never really understanding why. It’s like a smoke alarm that needs new batteries, dutifully shrieking with brainless devotion. Instead of being fun, it’s just immensely frustrating. When your viewers only continue watching because they’ve succumbed to exhaustion and no longer have the energy to reach the remote, you’ve got a problematic film on your hands.

A lot of the film’s failures can be chalked up to a first-time filmmaker. Abrupt fade-outs and jarring edits suggest that the coverage wasn’t quite what he wanted it to be, and the slapdash experimentation with color and alternative POVs show a Raimi-esque ambition but none of that master’s innate flair for the macabre. In fact, Cabin Fever is largely composed of material regurgitated from other classic films like The Last House on the Left and The Texas Chain Saw Massacre, with a sizable dollop of Friday the 13th. This kind of construction is typical for a neophyte, but the personality sprinkled atop that amateur framework is one that will haunt Roth throughout his career.

No matter how far you run, you always bring yourself along for the ride, and that’s why Cabin Fever’s major flaws are just as unforgivable as those that riddle Roth’s films a decade down the line. He might get more experienced, but he’s still stuck with himself. Because, wonky construction aside, this movie really just isn’t very good at all, which is a shame considering its truly solid potential.

Unbearable characters with microscopic motivations (including a cop who must get a dollar for every time he says the word “party”) rattle around a pinball machine of effective but hardly revolutionary gore (the standard tune of my Roth reviews, or so it seems), plus Roth himself steps in with what is unequivocally the most grating, soul-suckingly unfunny cameo in the history of cinema. Armed with a soul patch and a sub-par Zoolander impression, he stabs the movie in the heart and leaves it to die.

The one bright beacon of hope in this incessantly boorish film is the convenience store, the location of the film’s two best scenes, as well as its most haphazardly iconic. Here, largely thanks to the unforgettable, breathy performance from ingenious unknown Robert Harris, the film’s intention shines brightest and it briefly becomes the palatable, silly horror venture it constantly wishes it could be. Cabin Fever is a major disappointment, but these scenes prevent it from being utterly contemptible, which Ii admittedly rare with this particular director.