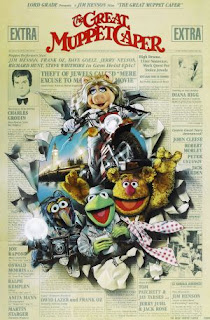 The second stop on our tour of theatrical Muppet features is The Great Muppet Caper, which elbowed its way into theaters in 1981 amid the greatest slasher boom of the 20th century. It actually debuted on the same day as Road Games, sandwiched right on in between Final Exam and Student Bodies as a family friendly alternative toall those psychopathic murder sprees. Film history is weird.

The feature film follow-up to The Muppet Movie two years earlier, The Great Muppet Caper debuted after The Muppet Show finally closed its doors. It netted almost twice the budget of its predecessor, carving a new path for the future of Jim Henson’s Muppets. And who better to direct this next chapter than Henson himself? Taking over from the anonymous James Frawley, his work would be much more idiosyncratic, though perhaps not quite so coherent. 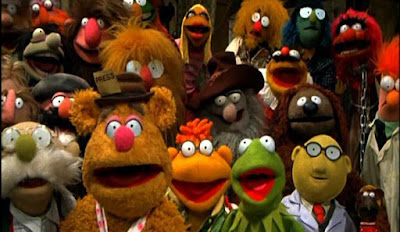 I’m just saying, maybe the guy who invented these guys didn’t have his head screwed on totally straight.

In The Great Muppet Caper, Kermit the Frog (Jim Henson) and Fozzie Bear (Frank Oz) are twin brother reporters and Gonzo (Dave Goelz) is their intrepid cameraman. In order to save their jobs, they travel to England to investigate the theft of Lady Holiday’s (Bond girl Diana Rigg) diamonds. Kermit mistakes secretary Miss Piggy (Frank Oz) for Lady Holiday and they fall in love, because apparently their romance is going to respawn every time like it got blown up in Call of Duty. Lucky us.

When Miss Piggy is framed for the theft, Kermit and the others team up to catch the real criminal, the Lady’s brother Nicky (Charles Grodin) before he and his team of models steal the Baseball Diamond from the Mallory Gallery. 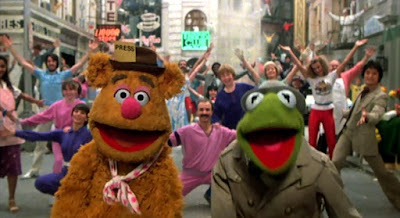 Yes, this movie was made for children, why do you ask?

Summing up The Great Muppet Caper is a thorny task. The ways in which it improves on the uneven, vignette-driven Muppet Movie are almost exactly equal to the ways it utterly fails to match up to the giddy, warm-hearted heights of that film. Let’s open with some positive remarks, because I don’t want you to go around thinking there’s a bad Muppet movie floating around out there somewhere.

First off, this film marries its Muppetian antics to a wonderfully intelligible plot. With actual conflict, story beats, and a recognizable three-act structure, Caper is driven by an intentionality that The Muppet Movie totally lacked. Second, Henson has an eye for composition that isn’t exactly Wellesian, but certainly outpaces Frawley’s frantic fumbling without breaking a sweat. My single favorite visual moment is when a lurking model drifts behind a mirrored pillar, drawing attention to another model across the room and creating the uncanny sense of being surrounded. His use of the camera in his storytelling is simple, but nevertheless whimsical and fun.

But you know what this movie doesn’t have? “Rainbow Connection.” The score is overloaded with original compositions, but none have the sweet resonance of Kermit’s swamp serenade, or even Gonzo’s terrifically earnest “I’m Going to Go Back There Someday.” The opening song “Hey a Movie!” captures some of the exuberant joy of creating entertainment and boasts a dazzling, intricately choreographed display on a city street utilizing dozens of dancers and even moving cars, but most of the other tracks (of which there are a staggering profusion) call to mind that dreaded word… Filler. 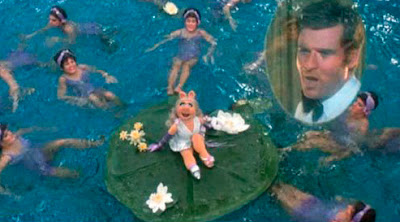 A word that instantly strikes fear into the heart of any devoted completist.

I really get the sense that The Great Muppet Caper was written after the songs were composed, because the story does some truly impressive Linda Blair contortions to shoehorn in production numbers. The entire second act feels like a prime time TV show with too many commercial breaks. Whenever we get an inch of plot, a mile of singing quickly unravels after it.

The actual conflict doesn’t kick in until about an hour into the movie, because of the film’s uncanny dedication to lushly staged but frustratingly pointless numbers like “Piggy’s Fantasy” (a lavish pool sequence that calls to mind Gentlemen Prefer Blondes) or “Night Life” (a wordless, tedious New Wave noodle that drags like a dead body – Electric Mayhem strikes again). By the time the meandering “Couldn’t We Ride” interrupts one of the longest sustained plot points (about a minute and a half, by my count), you begin to wonder if this movie dearly wants to punish viewers who have a less than thorough knowledge of Busby Berkeley. I mean, I like musicals, but this is like banging your head into a piano.

The unsuitably boring middle third of the film is also marred by what can only be described as a scathingly awful performance from Mssr. Charles Grodin, who certainly can act but even more certainly does no such thing here. If he was shooting for “unfathomably drunk,” he undeniably succeeded, but his unmotivated dialogue is exacerbated by the sense that he doesn’t seem to know what room he’s in half the time. 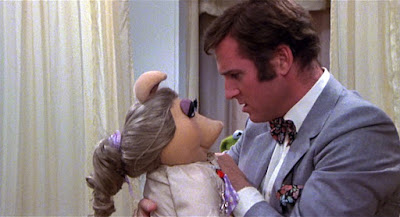 But take every negative feeling generated by that section of the movie and flip it the hell around, because the first and third acts feature the madcap Muppets at their finest. From the adorable, fourth wall shattering opening credits to the litany of jovial jokes (which aren’t quite as dopey as The Muppet Movie, but just as silly and vaudevillian), The Great Muppet Caper is a very lovable, extremely fun watch for the young, the old, and the furry.

Utilizing its gargantuan budget (methinks the lady’s diamonds might have been stolen to fund this movie), Caper performs incredible feats of visual splendor that the Muppets were wholly incapable of pulling off before. The opening number and the closing heist thrum with vibrant creativity that plays with the darkness of the crime genre in a safe, effortlessly exuberant environment.

For all that I kind of despise a good third of The Great Muppet Caper, everything else is a more than suitable ointment for my pain. These are still the Muppets, and they still put on a good show. It’s their job and they do it well. With Henson at the wheel, they brim with cheery sentiment and unforgettable charm that goes an extremely long way.