Pig In The City 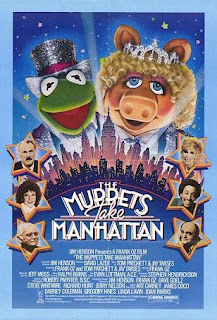 We are far from the end of our Muppet marathon, but we have hit a major milestone. 1984’s The Muppets Take Manhattan, the third feature film starring Jim Henson’s beloved creations, is also the final film to feature Henson himself before his untimely death in 1990. I don’t know what we’ll face in the sprawling decade of 90’s Muppetry, but at the very least it’s some comfort that his final silver screen outing was the most consistent, appealing cinematic Muppet venture yet. 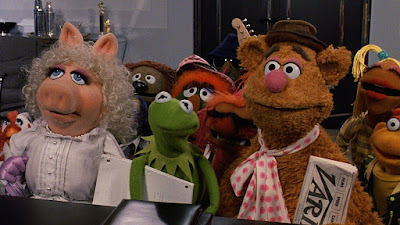 Although, let’s not pretend any single moment in cinema history could beat “Rainbow Connection.”

The Muppets Take Manhattan begins like every great Muppet film should: with a dream: Kermit the Frog (Jim Henson) and his friends have just graduated college and decide to head to Broadway to put on a show. Unfortunately, the big city eats apple-cheeked sentimentalism for breakfast, and they end up living out of bus station lockers and struggling to get by. The gang splits up to pursue their own destinies, but Kermit stays behind, befriending a waitress named Jenny (Juliana Donald) and teaming up to save the show and get his friends back together.

Miss Piggy (Frank Oz) also stays behind, to tail Kermit and Jenny and fly into a jealous rage whenever they hug. Hijinks ensue, involving roller skates, permed curls (never forget this was made in the 80’s), amnesia, and plenty of celebrity cameos. Half of which I recognized this time! 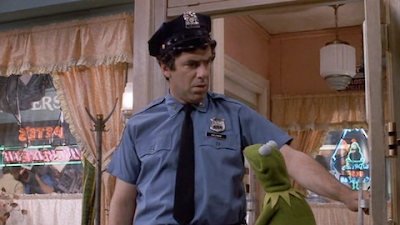 I might just know Elliott Gould from playing Ross and Monica’s dad on Friends, but that still counts!

With this entry, the Muppets have finally settled into the right budget range. The Muppets themselves maintain their astonishing lack of physical limitation (save a close-up of their marching feet, an unerringly disturbing sight that not even Kubrick could have gotten right), but tone down on the extravagant, showy production numbers. The Muppets are a lot of things, but they’re not shallow, and the exhausting profusion of pace-halting glitz in The Great Muppet Caper got alarmingly close to that dreaded lack of depth. But never mind that, because we’re back and we’re going to Broadway!

Since we spent so much time slamming Caper’s musical propensities, I suppose it’s prudent to explain where Manhattan goes right. The soundtrack is perhaps the most consistent of the first three films (though there is no standout like “Rainbow Connection,” it also doesn’t hit a nadir like “Couldn’t We Ride”), with each number actually servicing the plot and its themes in some way. The only time the film takes a screeching halt for a number is the playful doo-wop “I’m Gonna Always Love You,” performed by a live-action commercial for the Muppet Babies cartoon that would premiere two months hence. Fortunately, this performance is so cute that your face melts like that Nazi from Indiana Jones and you can’t be bothered to notice how indefensibly pointless it is. 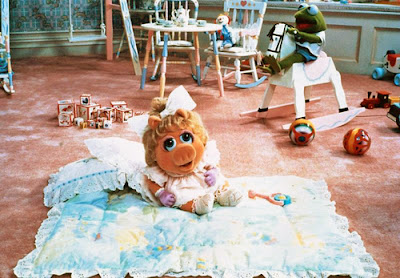 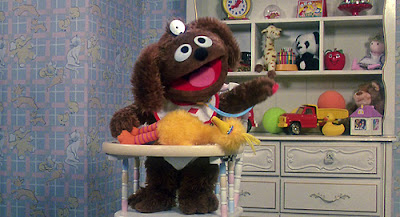 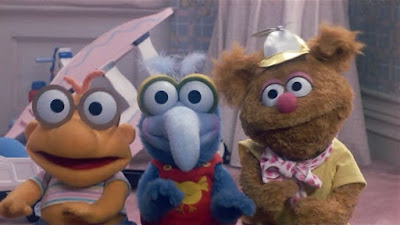 No further questions, your honor.

Another stand-out number, for obvious reasons, is the recurring motif “Together Again,” as direct a statement of the sentimental Muppetian love for the world, its inhabitants, and each other as there ever could be. It also boasts some kick-ass shoulder choreography that just shouldn’t be possible to achieve with felt hand puppets. And then there’s “Somebody’s Getting Married,” a musical theatre pastiche that bottles pure Broadway joy into a song that serves a purpose both in the show within the movie and the movie itself. Now, that’s screenwriting.

Now, Muppets Take Manhattan is not a perfect movie. It’s a consistent movie with by far the most successful narrative in the franchise, but that doesn’t necessarily mean it’s the best. At times it can be altogether shaggy, especially when it splits up the core group of Muppets. We get a grab bag of sketches of varying quality describing their whereabouts, and the dutiful focus on each individual Muppet is charmingly sincere, though a bit long in the tooth. Especially in the third act, there are a lot of additional plot points that crop up just to add another wrinkle to the plot for no real reason other than extending the run time.

And I suppose there’s no better place than here to bring up an issue I’ve had with the Muppets since day one. It’s controversial, so viewer discretion is advised. I’m not a fan of Kermit and Miss Piggy’s relationship. I get the sitcom “take my wife, please” act, but I don’t ever feel for more than a minute at a time throughout any of these movies that Kermit cares about Piggy or wants to commit to her in any way. Her unfiltered devotion compared to his slightly alarmed ambivalence gives me angina. Piggy pushes and pushes him about getting married after he sells the show, much to his seeming consternation. So when the musical finale concludes in a showstopping wedding, it doesn’t feel earned at all, making the entire ending a little abrupt and clunky.

So there you have it. Brennan hates love.

But damn it all to hell, this is a Muppets feature. It’s silly, it’s fun, and Miss Piggy bends iron with her kung fu grip. You’re never not having a good time when you’re watching The Muppets Take Manhattan. The cameos are a little lax this time around, but having a roller skating Gregory Hines ask “You gave Jenny the huggies?” pretty much makes up for any deficiencies in that regard.

This is the first Muppet feature to never break the fourth wall, but it’s also the first to be an actual, bona fide movie. With Frank Oz, the Muppeteer with perhaps the broadest extracurricular experience (Yoda! Little Shop of Horrors! The man’s an icon.), at the helm, the movie finds its way to the finish line with fleet footing. Or is that hoofing? Webbing? At any rate, it’s even more fun to watch the Muppets take Manhattan than Jason Voorhees, and you know how much I adore that big lug.