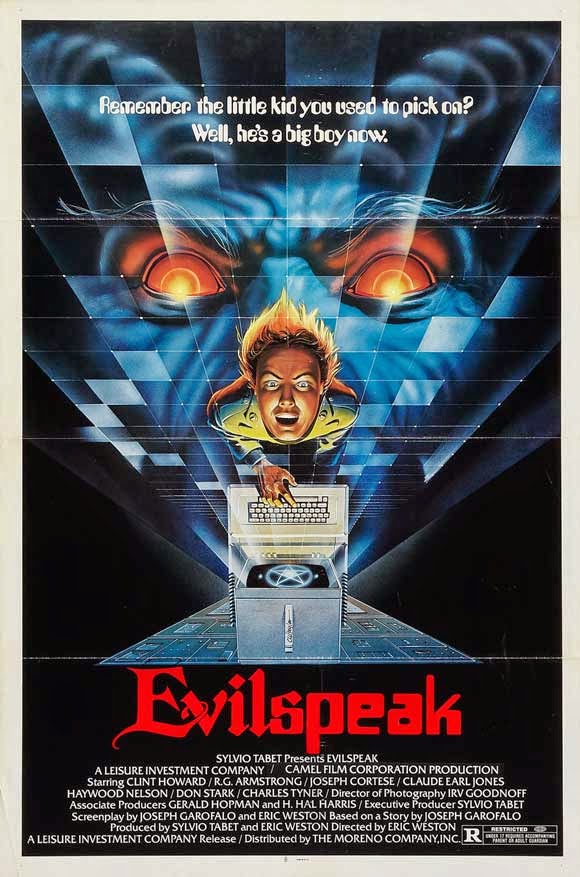 I might as well just stop Census Bloodbath right here and now, because Evilspeak is possibly the most 80's movie ever made. Of course, I must continue - my contract with the Dark Ones has very little wiggle room. But this film is so exhaustingly, damnably culled from the darkest depths of the decade that it pushes beyond the envelope of camp into the dark, impenetrable void beyond.

Combining Video Nasty status-earning gore with the waning specter of Brian de Palma's Carrie, the caveman-like fascination 80's screenwriters had with rudimentary computer technology, and the burgeoning Satanic Panic, Evilspeak is an indelibly strange amalgamation. If it only included a pair of roller blades and maybe some Orchestral Manoeuvres in the Dark, it would be the indisputable king of 80's horror. 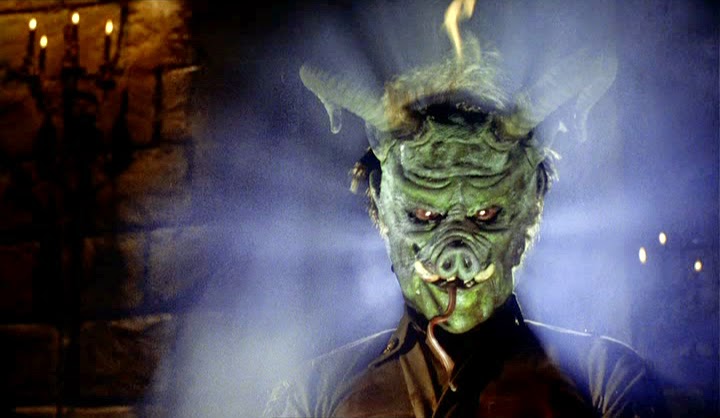 All hail the goblin king.

Evilspeak tells the story of Stanley Coopersmith (Clint Howard), a cadet at West Andover Military Academy, which I guess unofficially continues my Back to Skull college slasher marathon. Every single person in the world hates Coopersmith. He's basically the Justin Bieber of the Massachusets military.

The school bullies, led by the vicious Bubba (Don Stark) despise him because he is chubby and clumsy and school rules force him to play on their soccer team. Their bone-chillingly clever, incisive nickname for him is "Cooperdick." Keep it up, fellas. You're doing God's work. The Coach (Claude Earl Jones of Dark Night of the Scarecrow and Miracle Mile) hates him because he keeps losing games. The head of the school hates him because he is a poor orphan welfare case and a symbol of the school's financial erosion.

Coopersmith's only friends are his classmate Kowalski (Haywood Nelson of What's Happening!) and the school's cook, a gruff but understanding man named Jake (Lenny Montana of Blood Song). But after relentless torment at the hands of everybody and their mother and their kitchen sink, he's understandably a little irate at humanity in general. When he is sentenced to clean up the chapel basement as punishment for something he didn't do (I mean, seriously), he finds a Satanic book left behind by the excommunicated Spanish Satanist Father Lorenzo Esteban (Richard Moll of House).

He loads the text of the book into his trusty computer, and it becomes an expert on the rites of Black Mass. He fashions a secret room in a convenient basement cave, fills it with the entire candle stock of Pier One, and sets out to see if he can summon that pesky Devil. While he searches for the blood of a consecrated host ("Gotta have it," he sighs, like he's buying pomegranate juice at the supermarket), the computer gets possessed by the vengeful spirit of Esteban, who seeks revenge for something or other. 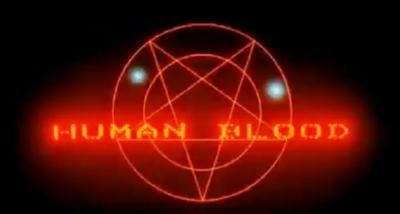 Maybe he's mad he didn't snag some of that Apple stock before he died.

For just about its entirety, Evilspeak is a supernatural bullying drama rather than a slasher movie, only picking up any sort of body count during its final sequence. So as a candidate for Census Bloodbath it's not exactly prime, but as a candidate for cheesy Satanic horror it's... still not exactly prime. There's a great deal of amusement to be found in the computer graphics which have aged worse than the horse-drawn carriage, but beyond that the film is plodding. Despite matching the classic Carrie in its slow-burn buildup to an explosion of carnage, it lacks that film's sense of gravitas and thematic resonance.

For the bulk of its run time, Evilspeak devotes itself to a depiction of bullying unrivaled in even the most hardcore John Hughes films as Bubba and his crew prank, injure, and verbally assault Coopersmith. They toss his hat out the window, sabotage his class project, and (last but not least) slaughter his dog. It's unrelenting and mean-spirited, doing a good job of depicting just how bad a situation the act of bullying can cause, but not providing much reason to enjoy the act of watching the film.

It's a nice bit of representation to have a lead character who's a little dumpy, so I respect that, but the tone of the film is just a bit too morbid. Not even unintentionally campy moments like a character vowing to "extract revenge," the music evoking Tom and Jerry whenever the janitor comes onscreen, or the bullies attempting to seem threatening at a roller disco can save Evilspeak from its dismal fog. 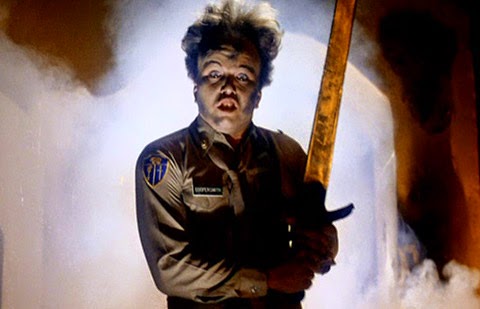 Not even THIS scene can - OK, this scene is pretty cool.

The saving grace of Evilspeak is its ending. The supernatural horror steadily builds up in the background in the form of some surprisingly effective low-key fright gags until it screams like a kettle, pulling out all the stops and dumping the entire remainder of its budget.

Many of the movies persecuted in Britain as Video Nasties live on the strength of one particular scene and this film is no different. This grand explosion of a finale features decapitations galore in a burning church, an evil heard of pigs mauling a soccer team, and a bully's still-being heart ripped from his chest. It's, in a word, awesome, and the one reason I would recommend this film to anyone.

You'll have a devil of a time.

If you're stalwart enough to survive the dreary excesses of the first half of the film, Evilspeak can be immensely rewarding. And its attempts at depicting the mistreatment of young cadets is admittedly impactful. Although I wish that it was more than a cut-and-dry Satanic revenge story and had more thematic meat on its bones, the flick is chock full of top notch Magic Computer nonsense and surprisingly decent grue when the time comes.

I'm afraid I have to halfheartedly recommend it. Do with that what you must.

Killer: Father Lorenzo Esteban (Richard Moll) and/or Lucifer (Himself), acting through a boxy computer and/or Stanley Coopersmith (Clint Howard)
Final Girl: Not even close.
Best Kill: As the wrist of a large crucifix begins to show a pulse, the nail through Christ's hand wriggles out and impales Reverend Jameson's forehead. 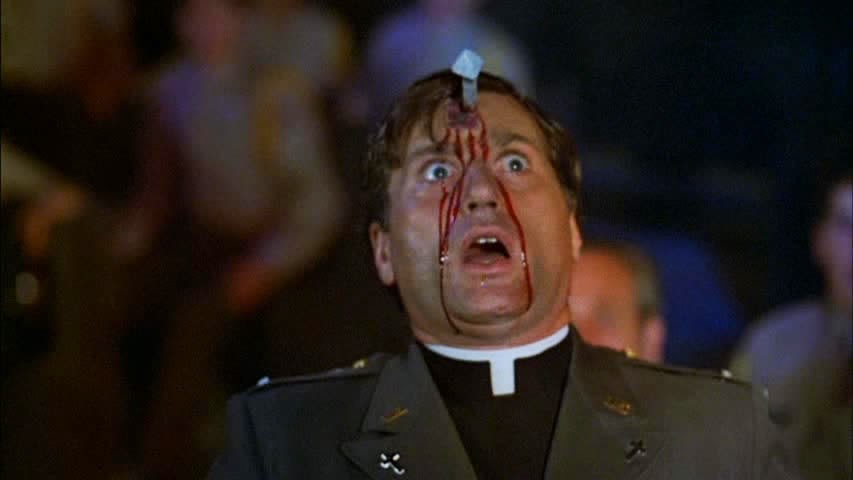 Sign of the Times: Literally anything that happens to any computer, which is pretty much everything. 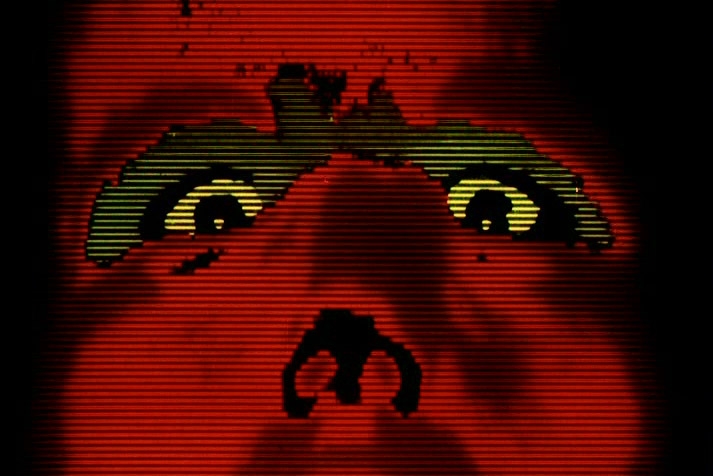 Scariest Moment: A weird fetus creature in a jar begins to wriggle and escape during a dream sequence.
Weirdest Moment: Coopersmith asks his computer "What are the keys to the kingdom of Satan's magic?" and somehow expects an answer in the era before Google.
Champion Dialogue: "Don't they teach you damn fool cadets nothin' about pigs?"
Body Count: 13; not counting poor Freddy the dog.
TL;DR: Evilspeak is a mean-spirited slog that is occasionally livened up by some top notch practical effects.
Rating: 5/10
Word Count: 1229
Also sprach Brennan at 1:33 PM