Census Bloodbath: Back To Back To Skull - Graduation Day 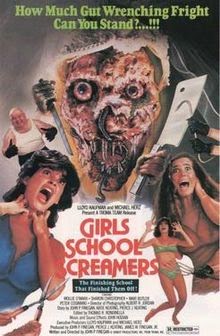 "In the darkness, there is evil. Within the evil, there is death."

Hello, everybody! Welcome to the final day of Back to Back to Skull! The torment is about to end! Well, for you. I still have an entire semester of college left after this. Our final excursion into the world of co-ed campus slashfests is Girls School Screamers, another release by the notorious bad movie production company Troma.

The poster for Girls School Screamers has it all: a syntactically confusing but tantalizing title, a tagline that has more punctuation than a text message in 2007, a wormy cadaver with a cleaver, screaming bikini girl mayhem, and a nun on uppers. I might actually prefer staring at that poster for 80 minutes over the film, because not a lick of it is accurate in any meaningful way. 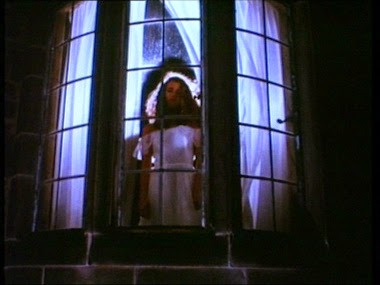 And there are NO good screenshots on Google. Like I want to work to find slasher stills. Rude.

Girls School Screamers is a woefully dull late 80's B-flick, wavering between being a haunted house movie and a slasher for 40 minutes before deciding that it should be both. Poorly. We open with the best scene in the film, in which a young boy is dared to enter an empty haunted house and is confronted by a rotted, worm-riddled ghost in a wedding dress. She gibbers and he runs and the credits roll on a film that is in every way less interesting - and almost entirely unrelated.

Some time later the estate - which belonged to the late Tyler Welles (Charles Braun) - is bequeathed to the Trinity School for Girls. When a group of young women is sent along with the kindly Sister Urban (Vera Gallagher) to catalogue the contents of the mansion, they hold a seance (of course they do) and awaken the slumbering spirit - who seemed pretty lively just a minute ago but what do I know.

By the way, the barely distinguishable Meat platter consists of Jackie (Mollie O'Mara), a young woman who discovers that she has a striking resemblance to Tyler's young niece Jennifer, who died in that very house in 1939; Elizabeth (Sharon Christopher), who is engaged to an unseen character, though if her strange predilection for acting with her eyebrows is an indicator, it might just be Eric Freeman from Silent Night, Deadly Night: Part 2; Rosemary (Monica Antonucci), a childish slob who wears an ash gray track suit who probably would have become a gym teacher had she not met her untimely peril; Adelle (Marcia Hinton) the token black friend who has not a trace of a character trait but is charming anyway; Susan (Karen Krevitz), the Blonde One; and Kate (Mari Butler) and Karen (Beth O'Malley), who are not the Blonde One.

After a full half hour of Sister Urban toddling around like a dizzy turtle and the girls counting objects (riveting), they finally begin to murdered one by one by an unseen force as Jackie slowly reads through Jennifer's diary at plot-convenient intervals to find out exactly what terrible thing happened in this house. Spoiler: It's boring.

Somewhere between The Dorm That Dripped Blood and Sorority House Massacre II, the plot is DOA, seemingly only a channel to display buxom ladies in their skivvies. The fact that the film fails to even do that (not a single topless scene, and no underwear to be found) is a testament to its supreme, almost otherworldly inadequacy. The kills in the film are shot with a level of basic splatter film competence, but lack any arresting grue thanks to the social climate of 1986 and or a budget flimsier than those "tearable" edges on notebook paper. So what any self-respecting cheapie would do is scoop up an armful of breasts and drop them onto the set to make up for a lack of bloody FX. Those come cheap and you don't have to wash them off quite as often. But alas, Girls School Screamers is beyond even that basic courtesy. 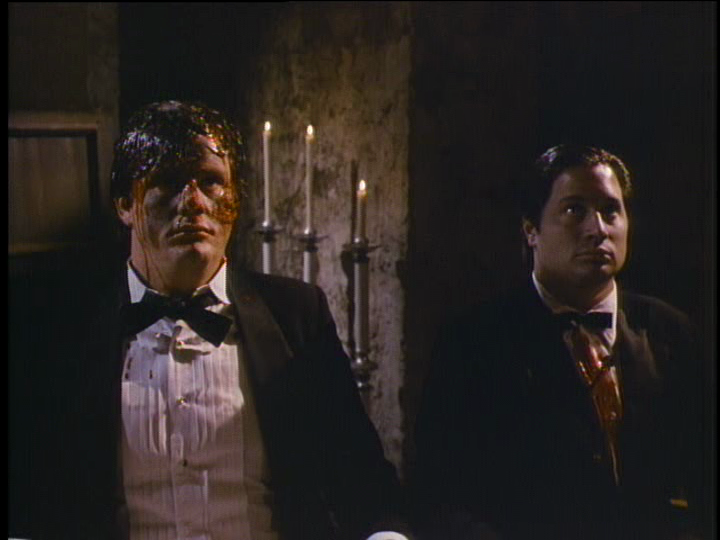 Also some boys show up, but we don't even get a sex scene. Exploitation shouldn't necessarily be a genre to strive for, but if you're going to take your stab at it, at least do it right.

The biggest sin of Girls School Screamers is that it's damn boring, but there's plenty of smaller sins sprinkled around for taste:

When there are no headshots on the entire IMDb cast list of a film, you know there's a problem with the talent. So we won't dive into this too much, but it must be said that Mollie O'Mara makes no attempt to differentiate Jackie from Jennifer Welles (who she plays in flashback) or even hazard a guess as to what people in the 1930's might have acted like. Vera Gallagher plays her elderly character so woozily that it looks like she might drop dead at any moment and Peter Cosimano (as Paul, Jackie's boyfriend) rattles off five page monologues with machine-gun monotony.

The composer here could give the guy who wrote my AAA driving video theme song a run for his money. His go-to theme is nothing less than a steel drum variation on The Exorcist and though I can say that I never dreamed I'd hear something like that, I can't say that it was good by any definition of the word.

When it's not being written and enunciated like a masterpiece theater melodrama, the screenplay skitters into the corner and concocts strange new verbal creations, the likes of which have never been heard before or since. A personal favorite is "he wanted to paint a portrait of me with himself as the artist." Also, I'm pretty sure Paul keeps calling his girlfriend "pal," but I could never get a bead on his exact verbiage because of his record-breaking vocal WPM.

It's just a poorly-constructed film, is what it is. Sister Urban tells the story of what happened to poor Jennifer, the film cuts to an entirely different person telling the same story to somebody else. Unnecessary and perplexing moments like this abound, like when Paul insists on visiting the newspaper archives to investigate the house where his girlfriend is staying, though he has absolutely no reason to be suspicious. The film briefly livens up during a flashback when it very nearly turns into  a silent melodrama, but for the most part it clunks along like a bike with square wheels.

The best thing I can say about Girls School Screamers is that the kills are mildly engaging for their variety and that people are actually visible in the nighttime scenes. These moments are quite obviously "lit" but I'll take a visible spotlight over a murky pool of darkness any day. So, don't go running out to Netflix to rent the film (how do things even work anymore?), but if it's a choice between this and, say, a Transformers marathon, you could do slightly worse.

Killer: The Ghost (?) of Tyler Welles (Charles Braun)
Final Girl: Jackie (Mollie O'Mara)
Best Kill: Susan pulls the chain on a light bulb and it electrocutes her. This is the kind of design flaw you'd think the engineer might have noticed, but American craftsmanship just isn't what it used to be.
Sign of the Times: Elizabeth wears a pair of cream-colored heels that I'm pretty sure dissipated back into the netherworld at the stroke of midnight on New Year's Eve in 1989.
Scariest Moment: The opening (see: only) effects shot is quite a doozy. 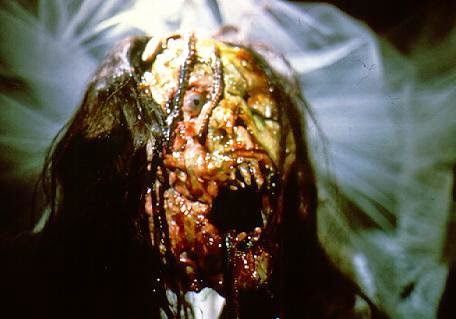 Weirdest Moment: A Jewish doctor named Robert Fisher mysteriously appears at the beginning and end of the film although he was never asked to come to the house and has no impact on the plot whatsoever.
Champion Dialogue: "You're gonna make a pretty good parent the way that you're worrying. Just kidding."
Body Count: 9; including the killer, assuming he wasn't a ghost maybe.
TL;DR: Girls School Screamers is a plodding, sexless wisp of an exploitation film.
Rating: 3/10
Word Count: 1418
Also sprach Brennan at 10:57 AM