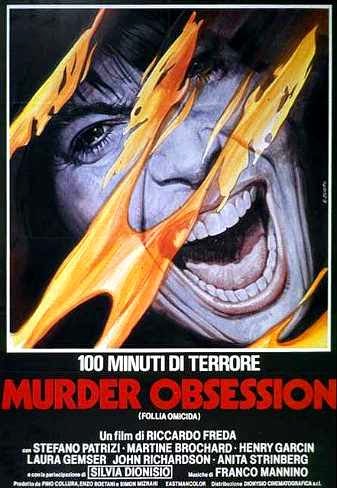 Italy was in a strange place in the early 80's. Aside from the ways that Italy is a strange place in general. The highly successful gialli of the 70's were winding down in favor of gory zombie and/or cannibal films, which were produced with deranged proliferation in the decade to come. And the pool of the "unsettling colorful imagery first, plot second maybe never" giallo films had been tainted by the increasing popularity of the American slasher genre.

The elegant gialli of Mario Bava and his brood were swiftly becoming a thing of the past. Though the decade would still see some Argento classics and quality Italian slice-and-dice pictures like StageFright: Aquarius, the country's increasingly slasher output was mostly anemic fare. Anyone who read my review after I choked down 1980's Trhauma can understand why I would attest to that.

Our newest entry to Census Bloodbath is no different. Murder Syndrome aka Follia omicida aka Murder Obsession aka Fear aka Texas Chainsaw VII: The Deadening (probably) was the latest cheap cash-in on the slasher craze, mixing in classic slasher elements with a Psycho structure and a dash of hyper-Italian supernaturalism for spice. Although it's a dreary bore, at least one thing can be said about Italian slashers - Murder Syndrome included. They're never typical. 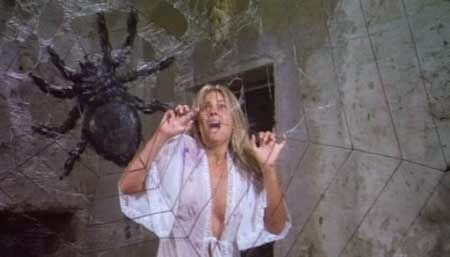 I wouldn't argue that this means they're GOOD, but at least it's something to chew on.

This is a film which opens with a traumatic rape/strangling sequence (revealed to be a scene being filmed for a movie, one that seems even worse than the one we're actually watching) then immediately cuts to a man playing guitar on his couch for a full minute. This is a film in which a woman's friend tells her to take a hot bath, somehow doesn't hear her screams from through the door as a man attempts to drown her, then later reprimands her for having taken a bath.

But I've jumped ahead. The story of Murder Syndrome is a simple one. Until it isn't. Michael Stanford (Stefano Patrizi) is an actor who experiences a mild spot of uncontrollable violence on his latest film set. He rightly decides that he should probably grab a little R&R and brings his shrill girlfriend Deborah (Silvia Dionisio) with him to his mother's stately mansion in the country. There, they are greeted by the creepy butler Oliver (John Richardson), who informs Michael that his mother Glenda (Anita Strindberg) is extremely ill. Because this is Italian cinema, the ailing, aging woman is played by a breathy blonde vixen. 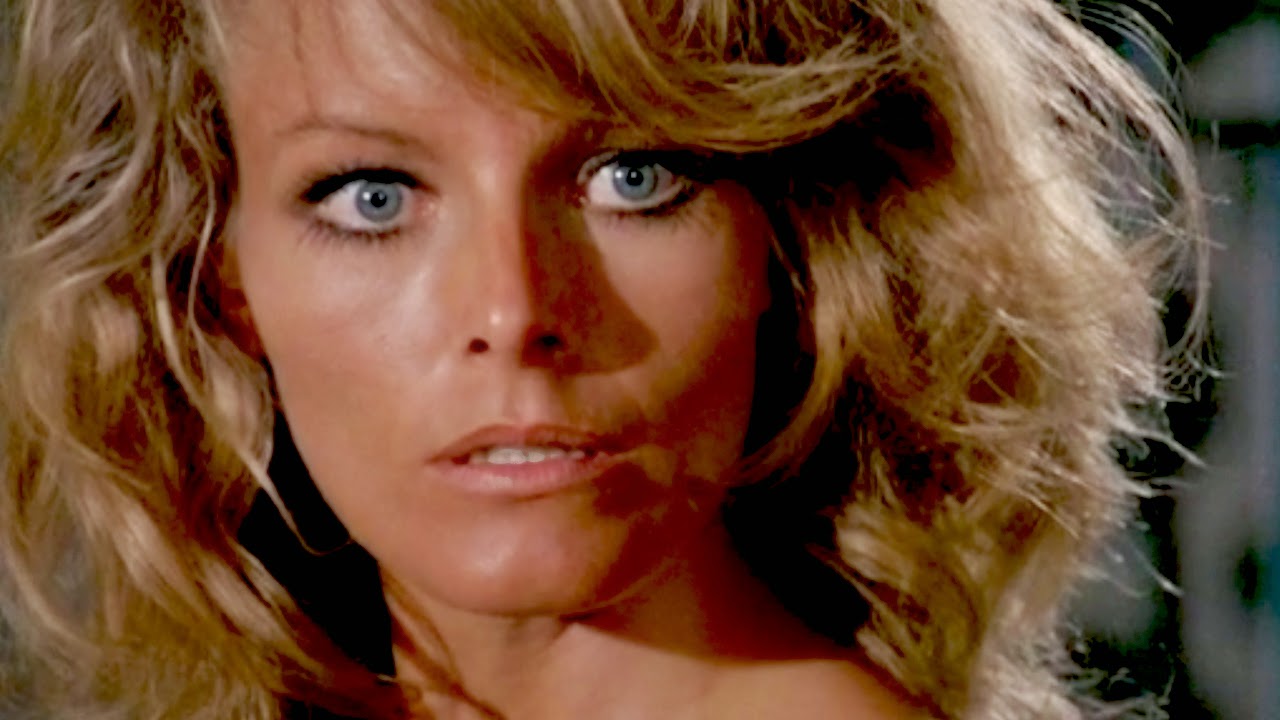 Why grandmother, what big bazongas you have!

It wouldn't be Italy without a healthy dose of seething eroticism. But more on that later. We still have to meet the Meat Michael's houseguests! There's Hans (Henri Garcin), Michael's somewhat voyeuristic director who carries a camera wherever he goes; Shirley (Martine Brochard), the assistant director who carries one of those annoying little dogs around; and Beryl (Laura Gemser), the stunning lead actress.

As these people wander around the grounds "scouting for locations" but mostly just banging each other, Michael struggles with memories of murdering his father, The Maestro. As supernatural occurrences begin to... occur, the group grows more and more anxious until eventually they die one by one. After over an hour of the film has already farted itself onto the screen.

The biggest problem with Murder Syndrome is by far its languorous pace, but the piss-poor production values and poorly executed gore likewise give it a leg up in the "being bad" regard. You've already seen the massive rubber spider up above, but toss in some rubber bats and a papier-mâché head and you've got yourself a movie that looks more like a not-particularly-crafty parent throwing a Halloween party for their seven-year-old. 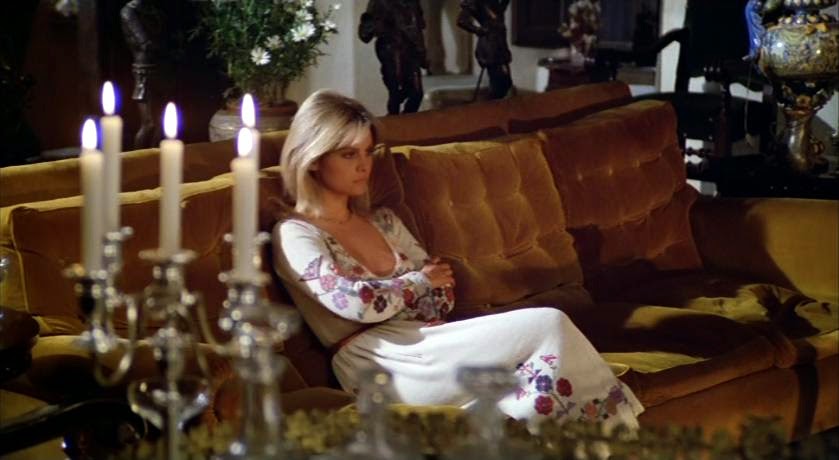 The candelabras are a nice touch though. What is that, Party City?

Luckily the gore sequences are ambitiously bloody enough that their shoddy design is more charming than grotesquely inept. The dummy head explodes with the force of a watermelon when smacked with an axe, and a chainsaw to Shirley's neck provides a veritable waterfall of ketchupy blood.

Actually, most of the good elements in Murder Syndrome elicit the same "aw, at least you were trying" reaction. There's some interesting nightmare imagery in the second act (vomiting nuns, balls of snakes, groping spider hands) that is frightening enough for how cheap it is. And there are plenty of vigorous stabs at metaphor and thematic resonance.

Though plenty of these attempts are admirable (especially the recurring superstition that photography erodes the soul and the repeated motif of the lights in the house spontaneously going out), they mostly peter out after the middle of the second act in favor of a series of nonsensical supernatural revelations. Sure, I can accept that the mother performed a Black Mass to subtly force her son to come home. Sure, I can accept that we are given two completely separate explanations for what has been happening in immediate succession. But when this claptrap is at the expense of a plot thread so rife with potential, it's a real disappointment.

But hey, at least there's plenty of exploitation! 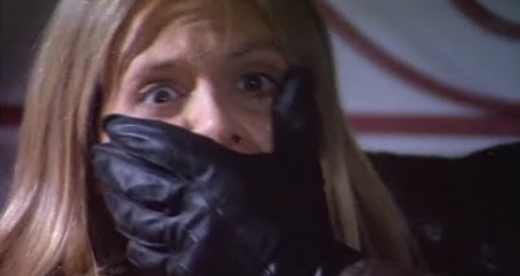 Said no one ever.

Murder Syndrome cheerily indulges its audience with topless scenes sewn into the fabric of just about every other minute of the film. Many are brazen, of course. Like when Deborah runs through the rain in a dress so gauzy you worry it might dissolve off of her. But others are so subtle, you doubt their very existence. The middle portion of the film is something like a Where's Waldo book of stray nipples. Brambles tear open shirts as ladies run, bare chests form a great deal of the background of the Black Mass, and anytime a female character is wearing a robe, an errant boob finds its way to freedom more often than not.

So, at any rate, Murder Syndrome is very much a vivaciously exploitative product of its time and its country. So academically there's more than a little interest to be had. But it is eternally bogged down with "sit and let me tell you a tale" storytelling that destroys the pace, and the storylines are far too uninteresting - at least proportionally to their potential. Murder Syndrome is a wash, but at least we'll always have the nightmares.

Killer: Oliver (John Richardson) and Glenda (Anita Strindberg)
Final Girl: Deborah (Silvia Dionisio), but only incidentally.
Best Kill: Shirley gets her head chainsawed off.
Sign of the Times: Most of the female cast members are alumni from the Women's Prison cinematic movement in Italy.
Scariest Moment: An extended nightmare sequence beginning with Deborah getting caught in a giant spiderweb, middling out with bleeding tree skulls, and capping it all off with a Black Mass.
Weirdest Moment: Oliver is revealed to have psychic powers in a line given about the same weight and gravity as if he had said "I made you a sandwich."
Champion Dialogue: "In case you don't know, I murdered him."
Body Count: 6; Not counting Deborah, who surely died soon after the credits rolled - and not double-counting the Maestro, who was killed over again in two contradictory flashbacks.
TL;DR: Murder Syndrome is dull and ill-paced, but offers up mild Italian exploitation charms.
Rating: 3/10
Word Count: 1264
Also sprach Brennan at 1:29 PM