I Fought The Saw And The Saw Won 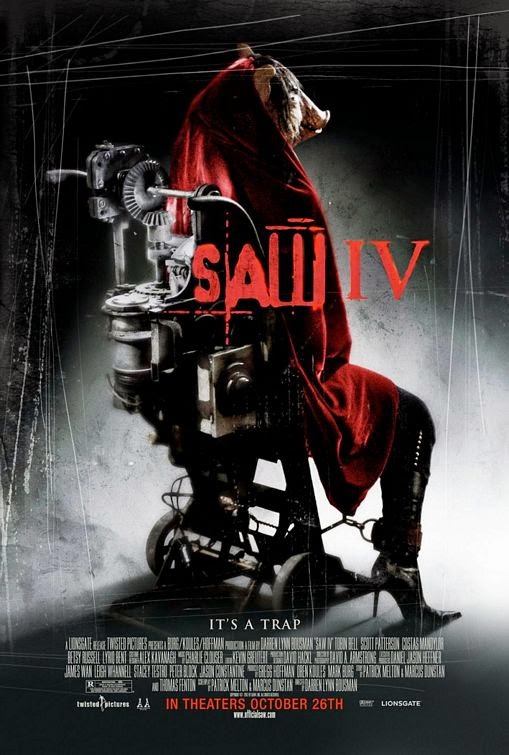 There's not a lot the Saw movies have to offer to the discerning cinephile, but at the very least they're consistent. In this case consistency means equally mystifying conclusions, ineptly acted characters who are dumber than the wood that comprises their dialogue, and exponentially grimmer gore sequences imprisoned in an irritating aesthetic like bright green amber. But they're consistent just the same.

Director Darren Lynn Bousman returns for his third and final entry in the franchise, the only remaining leading light of the original (more or less - he jumped in on Part II) Saw production team now that writer Leigh Whannell has left the building. Usually when a franchise's recurring writer jumps ship, the whole enterprise begins to slowly sink, but here his loss is felt not one whit, largely because his replacements are just about equally crappy. The more things change, the more things stay the same, or so they say.

[WARNING: THERE ARE MEDIUM SPOILERS FOR EARLIER ENTRIES IN THE FRANCHISE LITTERED AROUND THIS REVIEW.] The most I can say is that, through some inexplicable twist of fate, Saw IV at least slightly improves upon its shrill and pornographic predecessor. Although this is in no way clear at the beginning, which features an alarmingly grotesque autopsy for no other reason than to quench thirsty gorehounds before the plot even threatens to peek its head around the curtain. I mean, at this point, who else was left in Saw's core audience?

These are the questions that plague me. By the end of this marathon, I hope to have gained some insight toward an answer. I have a hypothesis that I've been chewing on, but I think I'll save that chestnut until we're a little further down the line.

Anyway, the traps. Because the screenwriters like the "gauntlet" idea of Saw III so much, that trap style continues here as Lt. Daniel Rigg (Lyriq Bent) - who has proven himself to have somewhat of a hero complex that is putting strain on his marriage and health - is put through a series of increasingly baffling tests in which Jigsaw attempts to teach him that not everyone can be saved and, in fact, should be taught to save themselves. Rigg is sent on a sort of grotesque scavenger hunt in which he must ignore victims in perilous traps in order to learn his lesson and save the lives of Detective Eric Matthews (Donnie Wahlberg) and Lt. Mark Hoffman (Costas Mandylor), who are being held captive at an undisclosed location inside - you guessed it - an arcane death trap. 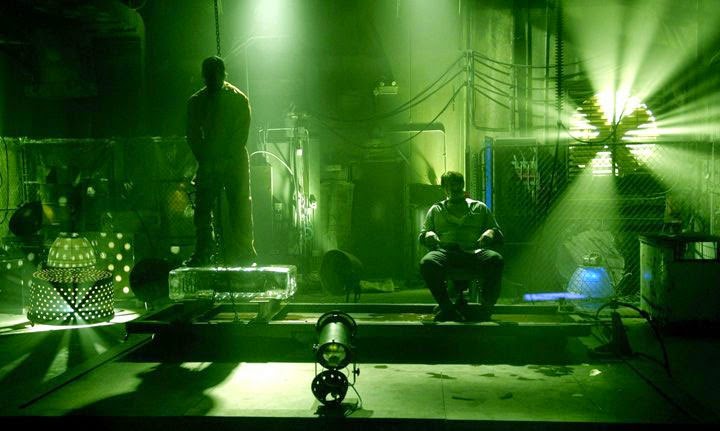 My current working theory is that the sun is green in the Saw universe and that any normally colored scenes are just the result of tatty fluorescents.

While all this is happening, Agents Lindsey Perez (Athena Karkanis) and Peter Strahm (Scott Patterson) are close on Rigg's tail, hoping to stop the Jigsaw killer once and for all and discover just who his mysterious accomplice might be (SPOILER: It's dumb).

As you may have noticed, once again the Saw series returns to a police procedural format, which is a great boon considering that it allows for more plot than merely a string of bloody traps like the world's worst candy necklace. It also fixes the biggest flaw of Saw III, returning the villain to the shadows instead of keeping him front and center.

The issue is, now that there are three whole movies to cull information from, the mythology of the Saw universe has gotten unwieldy. Like Audrey II in Little Shop of Horrors, the franchise has grown and grown with each dollop of blood, finally becoming a monstrous behemoth threatening to destroy everything in its path. And the first thing in Saw IV's crosshairs is narrative coherence. Old characters and minor recurring details are shoved willy nilly into the plot like a child trying to put a game of Life back into the box.

There are only so many old white dudes gasping in astonishment at other old white dudes one mind can take before it shuts down completely. I mean, I've been watching these films essentially back to back and need to use Sergio as a sounding board to piece together what the hell is actually happening in whatever scene we are watching. And that's not even mentioning the array of perplexing clues that Agent Strahm somehow uses to find Jigsaw's hideout. 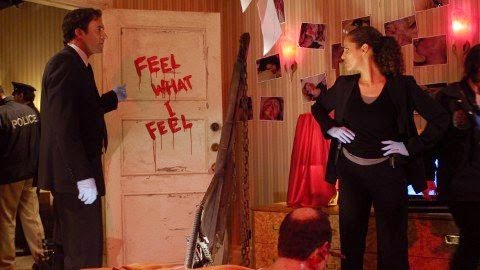 The less said about any of this, the better. No one is in the Saw camp for the heady narrative structure.

In this entry, Jigsaw's apparent clairvoyance reaches a peak as he can predict with accuracy which police officers will investigate his case, who stand in what position in any given room, and even - to a T - [who will be in his autopsy room after he dies]. Even worse, his MO is shakier than ever. Despite his repeated and irritating insistence in Part III that he is not a murderer, half the people in his traps are only there to be killed by others. It's still not technically murder by his hand, but the whole point is that people should be able to get out of their own traps. Whatever. It's not my place to question the motivations of a wheezy old sociopathic dickbag. And no, I'm not talking about the screenwriter, don't be mean.

In addition to this, Saw IV pulls out the age-old Hollywood sequel sin of adding unnecessary backstory to the killer by adding an ex-wife, a dead kid, and a weird baby Jigsaw doll into a story that should be as simple as "the dude had cancer, bro."

And the acting - oh, the acting! What would a Saw film be without a slew of kinda-unknowns with less personality than the creepy puppet? Nobody is a bad-good standout this time around, although the worst performances absolutely come from Betsy Russell as Jigsaw's ex-wife (although it's admittedly a challenge to pretend to be in love with someone old enough to be your grandfather - ask any of the Playboy bunnies) and Costas Mandylor, whose name is far more interesting than his befuddling turn as Lt. Hoffman.

Unfortunately, three sequels have been enough to drag even the perennial Tobin Bell down. The prequel-ish flashback material he is given is remarkably unsuited for his talents and this time around Jigsaw just seems drowsy - like a man on too much Dramamine rather than a deluded force of pure evil. And Donnie Wahlberg isn't even given a chance to be bad in perhaps the easiest role of his career - a man who is gagged and bound. Although the few lines he does get to say bring back his beloved character trait of yelling the same thing over and over again ad nauseum. 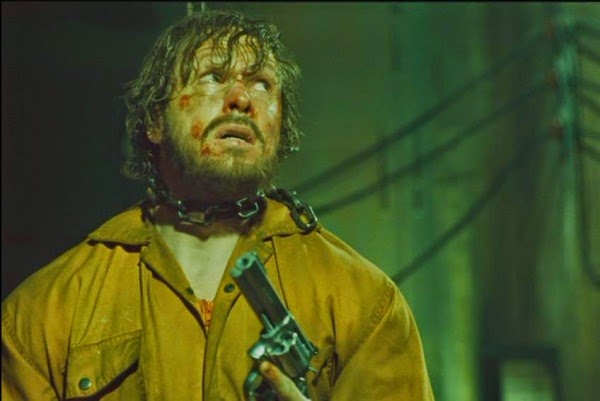 So yeah, Saw IV isn't great. It's slightly better than III in several regards. Including the increased procedural element, the gore is less lovingly pornographic (though it is even more grotesque), the seamless transitions between scenes are beginning to grow on me, and the twist is more clever - although I finally discovered the reason the twists have never really bothered me.

The score by Charlie Clauser ("Hello Zepp," though I like to call it the Revelation Song) that is reused for each closing sequence is just marvelous. It provides so much drama and import to any scene its attached to that even the dumbest pile of turds imaginable feels like an epically glorious epiphany. "Hello Zepp" could make a dentist telling you that you need a root canal feel like an adventure. You go, Charlie Clauser. Sorry I've never mentioned you before.

One more thing - certain parts of Saw IV are truly hilarious. Whether it's a tastelessly overt metaphor about smashing a clock, a trap set inside a public school classroom, Jigsaw's ex-wife talking about how "everything with [him] was carefully planned," or [the fact that autopsy technicians find a tape inside Jigsaw's stomach], this is prime cannon fodder for audience roasting. A personal favorite moment: a CSI worker is straight up taken out with a spike shot from an unused trap and not a single person notices or even mentions it.

This kind of movie can't go unmocked, so I'd urge anyone who wants to marathon only the best of the Saw franchise to consider tacking this one on to the meager list of "Saw and Saw II" that they've compiled.

See you next time.