OK, I'm trying my best here, but it's been super busy so here's a bunch more mini reviews to get us caught up on current releases. 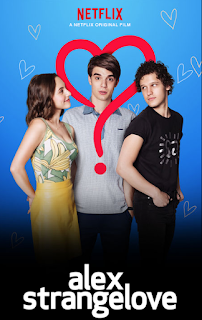 
A young teen must struggle to figure out his sexuality when his girlfriend starts to want to have their First Time but he begins to develop feelings for an older guy he met at a party.

Netflix hasn't made a great name for themselves in the original movie realm lately, which is why they should make way more midbudget movies like Alex Strangelove. There's no stakes or expectations like the overindulgent Bright or The Cloverfield Paradox, and it's a pretty dang special movie to boot!

Alex Strangelove is the smaller, weirder little brother to this year's Love, Simon, and it's the movie the world needs even more. Where Simon was buffed and polished by Hollywood to within an inch of his life, Alex grabs the reigns with an American Pie sensibility and is off like a shot. The film doesn't shrink away from the realities of life as a teen, from the awkward sexual fumblings to the filthy language to the first, failed drug experiences (I usually hate the obligatory "drug trip" sequence in this kind of comedy, but that even works here!). For a gentle teen romance, it actually has a bit of an edge, which is exactly what was missing from the charming but saccharine Simon.

The one thing I will say about Alex Strangelove insofar as it's a gay film is that its male love interest takes a backseat for way too much of the run time. We don't get to explore his character much, or why he would be particularly interested in Alex, and Alex's internal struggle is amusing, but it largely takes place when he's separated from his object of affection.

But for the most part, this flick is a right gem, sprucing up that on-the-ground teen realism with some quietly delightful creative visual effects. Alex's struggle is presented in a way that's actually - dare I say it - stylish, actually engaging with the power of cinema to give us images and ideas that no other medium is capable of. Maybe I'm rhapsodizing too hard about cereal boxes labeled "heter-O's" or the animal biology metaphor ripped straight from Mean Girls, but it's been so long since we've gotten a teen comedy that's in any way actually interesting to look at in any respect other than the beefy 25-year-olds playing the teens. Alex Strangelove is incredibly pleasant, and I highly recommend it for that and so many other reasons. 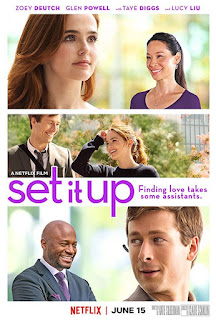 
Two assistants set up their bosses so they'll be treated better, but maybe they just happen to fall in love along the way too.

OK, maybe my Sunday nights are just going to be owned by Netflix from now on, because Set It Up is the exact sort of forgettable romantic comedy I've been craving from the market for some time. Everyone in it is impossibly gorgeous and oozes charisma, nothing of much import happens to any of them, and we get a few standout comic cameos, most notably from Kimmy Schmidt's Titus Burgess.

Now, I know that poster looks ten kinds of awful, but I promise the movie is completely bearable and even, dare I say it, funny? My knees aren't exactly going to be sore from slapping, but there are definitely some solid jokes that crop up from time to time. It's just thoroughly charming, generously bestowing you with good cheer for its entire run time and not challenging you for anything more. The only even minor quibble I have with it is the fact that we've hired Pete Davidson to play the gay roommate in the now-stock role of "gay dude who is just a straight bro who likes ass." It's a massive overcorrection from the swishy queens that used to populate screens in the 90's, and it's become just as irritating. And now that he's engaged to Ariana Grande, Pete Davidson's smug face is beaming at me from all the ads for this movie on Netflix, and please, give me a break with that.

I really don't have much else to say about this film, because it's not designed for one to think about or analyze. It's designed to be a completely inoffensive soap bubble that blows in the wind, brings you joy, and then pops into thin air, never to be thought about again. As I'll probably mention with one of my later picks, it isn't a sin for a movie to be designed this way. It's just not especially rewarding to really dig into the meat of it with a full review. 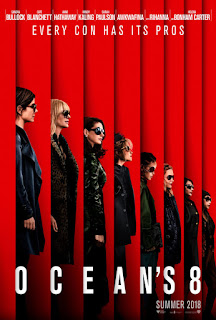 A group of eight ladies seek to fix the wage gap by running a jewel heist at the Met Gala, as if Rihanna needed help getting in.

Mind you, the movie is fun, but in a truly insubstantial popcorn movie way. Much like the all-female reboot of Ghostbusters, which was likewise... fine, the movie plays it way too safe, leaning back on a story about fast and easy female friendship that doesn't allow a lot of wiggle room for these people to actually become well-rounded characters. We get to watch a lot of shallow people be very good at stealing things, and that's not a bad time at the theater, but it's not a movie I'll be thinking about the second I type the last sentence of this review.

Really, the only thing to really dive into on this movie is the all-star cast, so let's go with that. Sandra Bullock is in top form here, prickly and unlikeable yet nevertheless charismatic in a way she hasn't been since The Proposal. The two runners-up for best in show would have to be Anne Hathaway and Helena Bonham Carter, who both are essentially playing cartoon characters toned down just enough to be palatable. But boy are they palatable, and it's an ebullient good time whenever they're onscreen together.

Sarah Paulson and Cate Blanchett, on the other hand, are actresses I know to be terrific who are given absolute bupkis to do. They're good enough to avoid becoming wallpaper, but they are too handcuffed by the script to do anything remotely interesting. And then there's Awkwafina and Rihanna, two musicians turned actors who have pleasing personalities but aren't going to be winning any awards anytime soon.

It is nice to watch these people hang out, but that's pretty much all that happens in Ocean's 8. By the time you get to James Corden's noxious cameo as an insurance investigator, all the energy has long since been sucked out of the movie, and Gary Ross has forgotten every one of the stylish fillips with which he introduced the story and its characters. Oh well. It wasn't a waste of air conditioning, at least. 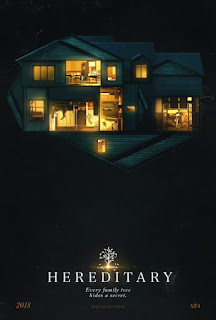 After the death of their grandmother, a family must cope with the emotional fallout of loss, guilt, betrayal, and demonic possession.

I really don't mean to be the guy who comes in to trash the A24 horror films, but at the very least I'm aware that they are horror. Movies aren't disqualified from the genre if they're slow-paced, nor if they reflect deeper themes. So at least I have that going for me before I say that I really didn't care for Hereditary.

Honestly, this movie has all the ingredients to be a movie I truly love (read: Toni Collette), and it succeeds heavily in the first act. Right at the end of the first act, there is a terrifying standout sequence (anybody who has seen the movie will know exactly what I'm talking about) that is perfectly, excruciatingly executed. This has a lot to do with the performance of Alex Wolff, who has graduated from being in the peanut gallery of Jumanji: Welcome to the Jungle to blowing the roof off in a single close-up of his face that takes you on a riveting roller coaster ride of emotion. It's a transcendent performance that goes toe to toe with the always superb Toni Collette, who is operating at 11 throughout this entire film (it's a bit exhausting, but it's what the movie asks her to do and she does it great).

Unfortunately, these stellar performances are given a script that, without spoilers, feels closer to Paranormal Activity 4 than The Witch. Hereditary really falls down a rabbit hole of overworn horror tropes that undermine any sort of specificity and power the story had created in the first act. And the title clearly indicates that we're meant to be really invested in whether or not Toni Collette has inherited a mental illness and everything that's happening is all in her head, but like most movies of this ilk, completely forgets what it's supposed to be doing in favor of shoving creepy imagery down your throat at every opportunity. I don't blame a horror film for wanting to be a horror film, but don't introduce that kind of doubt if you're not really going to do much with it.

It's a frustrating watch for someone who has received a steady drip of these kinds of movies for years, so the fresh and exciting bits are fully drowned out by the clunky, generic material that gums up the works. Maybe if I wasn't so familiar with these types of movies, it wouldn't feel so uninteresting, but this one just didn't do it for me at all. 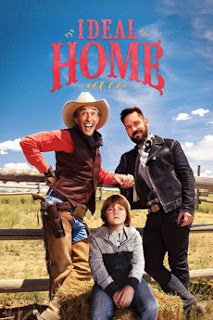 
A bickering gay couple find out that one of them has a long-lost grandson, who they must care for while his father is in jail.

And hey! The fact that we can make material this rote with a gay couple as the leads is a remarkable thing about the year 2018. Of course, Ideal Home ain't winning any Spirit Awards anytime soon, having cast two straight men in the roles and considering that literally nobody knows this film even came out, but their sexuality factors into the plot of the movie not one bit, and that actually turns its genericness into a political strength. It's just like every slightly edgy family comedy you've ever seen, and the fact that there's two men in charge doesn't impede the progress of the bland plot one bit.

Then there's the fact that Paul Rudd instantly makes any comedy at least one point better just through sheer charisma. He's rocking an incredibly sexy indie movie beard, but he's still our good ole Rudd, delivering his trademark brand of goofy yet naturalistic humor, this time through a sheen of everpresent supercilious disdain. Ah, and there's the real way this movie differentiates itself at all. The tone of Ideal Home is unusually bitter, refusing to cut its snide, posh characters any slack, as much as it loves them and wants them to love each other.

The film won't blow you away or anything, but at the end of the day, it's a nice way to spend 90 minutes. Also give money to gay movies that don't end in AIDS, tearful coming outs, and/or tragic death. Please, I'm begging you. I don't want to have to sit through The Normal Heart every time I want to feel represented in the culture. Look, if you even have a toe on the Kinsey scale, you're going to find Paul Rudd especially attractive in this movie, so that's a reason right there.