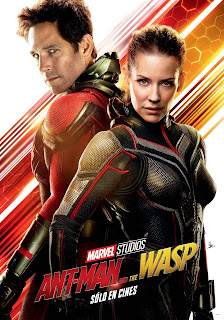 So this is how the Marvel movie year ends, not with a bang but with Michelle Pfeiffer. A scant two months and change after Avengers: Infinity War ravaged theaters worldwide, we're getting Ant-Man and the Wasp, a wispy summer treat before the MCU goes dormant until 2019, giving us some much needed rest. In which time we'll be getting Spider-Man: Into the Spiderverse, Teen Titans GO to the Movies, Venom, Aquaman, Hellboy, and X-Men: Dark Phoenix. 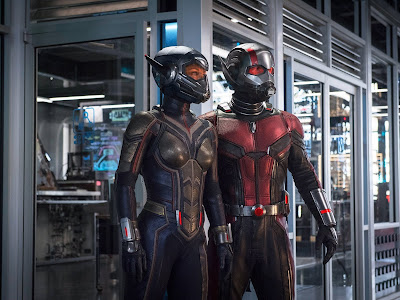 Never say Hollywood doesn't try to capitalize on a trend.

So, we pick up nearly two years after the events of Captain America: Civil War (remember those? me neither). Ant-Man is on house arrest for violating the Sokovia Accords (yeah, I don't know), and he is three days away from being allowed to return to the world. Unfortunately, right about this time is when he discovers a quantum entanglement with Janet Van Dyne (Michelle Pfeiffer), the long-thought-dead wife of original Ant-Man Hank Pym (Michael Douglas). This reunites him with Hank and Hope Van Dyne (Evangeline Lilly, who for continuity's sake has to wear her original bowl cut wig in several scenes, causing me to giggle for about twenty minutes straight because I did not remember how stupid it looked and it really caught me by surprise), and they struggle to rebuild their relationship while figuring out how to rescue Janet from the quantum realm. I promise I reduced as much pseudo-science gobbledygook as I could from that paragraph. It was a Herculean effort.

While our heroes run through a video game-esque gauntlet of "Need Object A? Acquire Object B to gain access to Object C to get it," they must avoid the FBI officer Jimmy Woo (my boy Randall Park), the rogue tech black marketeer Sonny Burch (Walton Goggins), and Ghost (Hannah John-Kamen), a girl whose particles keep expanding and contracting, allowing her to phase through objects, but keeping her in intense pain. She thinks she can cure her condition by sucking the science juice out of Michelle Pfeiffer, or something. 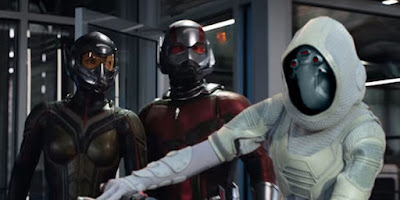 Though honestly, the pain seems like a fair trade for such a rad evil suit.

So far both Ant-Man movies have felt like a bit of a break from the MCU at large. The first one had a stronger separate core for its own story (namely, the heist element), whereas this one does have to deal largely with the implications left behind from a previous spinoff, but for the most part it's equally contained. The plot itself is a bit more sprawling, but it doesn't spill over into any other characters or plot lines, which is a welcome respite after the world-shattering character collisions of Infinity War  that required an MCU encyclopedia to get through.

And also much like the first one, there isn't a lot of meat on these bones. Anytime the story turns its focus to its feeble character drama, it becomes almost laughable. Lilly and Rudd's total lack of romantic chemistry exposes the mechanical artifice of the script. Whenever they exchange a glance or a kiss, you can hear the plot gears chunk into place. These things don't happen because they want them to, they happen because the narrative needs them to. The same goes for this film's wrinkle, the fact that Ant-Man's suit is a prototype and sometimes malfunctions, randomly changing his size at inopportune moments. But this happens only when its most convenient to the plot for a joke, and doesn't cause any major strife other than yet another one of the film's endless video game side missions. 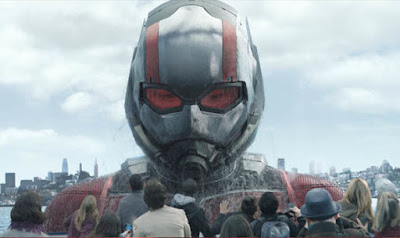 "Alright, who ordered the plot contrivance?"

Honestly, I'd be more content if this was just a comedy about being on house arrest, because as usual the humor is by far the strongest element of the movie. The bulk of this is delivered by Michael Peña, who returns to once more prove that the entire movie lies in the palm of his hand, but we also, blissfully get an appearance by Randall Park. I've long been a proponent of Park, but this is the first side role he's gotten in a comedy where he really gets to shine, allowing his character's businesslike exterior and seriousness convert into awkward ineptitude and confusion at the drop of a hat. It's his best work in a long time, and he's always doing his best work.

Paul Rudd is of course on fire as well, but whenever he has to deal with Lilly and her bleating nothing of a character, he flounders a little bit. He flounders a lot bit during a scene where [SEMI-SPOILERS] he channels a woman's spirit into his body, which he plays like a high school freshman trying drag for the first time in drama class [SPOILERS OVER]. But come on. He's Paul Rudd. He acts his way back out of that paper bag over and over again. And then there's Michael Douglas, who at this point is just expensive window dressing. 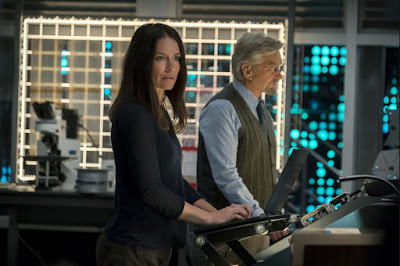 At least they fixed Hope's hair. This is an even bigger triumph than Jurassic World correcting Bryce Dallas Howard's footwear.

But even if the drama is firing on zero cylinders, the action is solid enough to provide a satisfying popcorn superhero romp. They really lean into our heroes' abilities to change size here, turning various small rooms and San Francisco cityscapes into wonderful Alice in Wonderland playsets, finding new, creative uses for everyday objects that is tremendously satisfying, even if it's not particularly groundbreaking.

Really, Ant-Man and the Wasp does what it needed to do. It provides us a (blissfully short, for one of these movies) two hours of distraction from the world outside (and, if you live near me, the blistering heat wave we got last Friday). It doesn't try your patience or test your brain in any way, it just lets you sink into a morass of fun, funny people doing spectacular things and not asking you to feel too much about it other than excitement. It won't go down in the pantheon of great summer movies, but it hits the spot, for sure.