In anticipation of Mamma Mia! Here We Go Again, I'll be reviewing a slasher movie with its fair share of dancing. In fact, it's in the title: 1989's Slash Dance. Yes, this is a real thing. 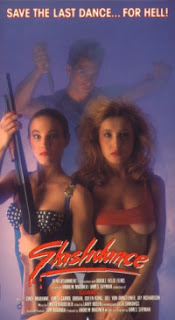 I have actually learned, my friends! I went into this movie not anticipating that it would be great based on that crazy title, and I was not disappointed! I've had some fun with a couple 1989 slashers, but let's never forget that when we venture this deep into the decade, the death rattle of the slasher subgenre had long since wheezed into quiet decrepitude. So that's one point for me and progress, but I still sat through this entire movie, so let's talk about it I guess. 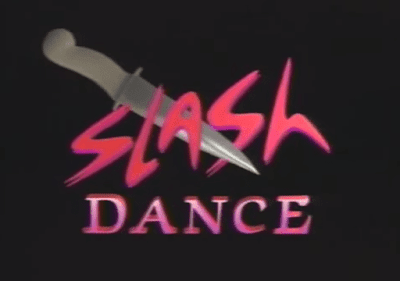 "Graphic design is my passion."

So, here's the plot of Slash Dance, insofar as it has one, which I'm not entirely convinced it does. Undercover cop Tori Raines (Cindy Ferda, an actual real life GLOW wrestler - who appeared on the show as "Americana") investigates crimes against women, much to the chagrin of her power-hungry boss who so transparently wants a promotion that he mentions it in literally every scene he's in and practically every shot he's in. He wants to avoid a scandal, because one time a topless picture of her leaked while undercover as a prostitute. We can't fight crime if there's boobs! Remember misogyny?

Anyway, so there's a struggling performing arts theater in Hollywood where people showing up for auditions are being murdered violently, so Tori poses as a dancer to investigate. The fact that she doesn't know how to dance doesn't hinder her, because nobody in this movie knows how to dance. There are a dozen anonymous women involved in the dance rehearsals, but the important figures are, naturally, men. Slashers!

So, keep an eye on the lusty director Logan (James Carroll Jordan), the car-strapped theater owner Oliver (William Kerr), stage manager Rupert (John Bluto) who is somehow both coded as foppishly gay and a trenchcoat-wearing flasher, and Oliver's brother Amos (J. Buzz Von Ornsteiner, who is now a semi-famous forensic psychologist) who is simultaneously playing an extra from Grease and a severely mentally handicapped Lennie-esque character. 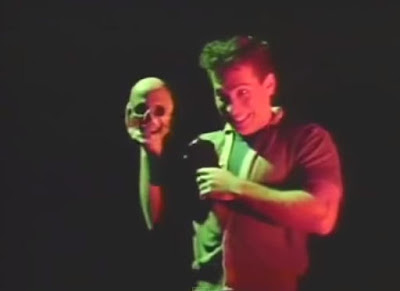 If Slash Dance were only its first act, it would number among my best bad-good new discoveries. It's a completely nuts genre mash-up where the gay flasher is just the cherry on top of a lot of weird decisions. This portion is surprisingly committed to the loose-cannon cop angle, with a lot of dialogue about "cleaning up these streets" that you don't normally get in a hack-'n-slash picture, and some of it is actually funny. Note that our designated comic relief (more GLOW castoffs in the form of steroid-abusing street rats Repo and Mavis, played by Dee Booher and Kelle Favara - "Matilda the Hun" and "Beastie" respectively) is mostly unwatchable, but there are some brilliant moments like a mid-strangle auditioner shouting, "but I have an appointment!"

It's like a Miss Congeniality movie, if it had awkwardly staged fight scenes, a honking komedy horn on the soundtrack, and periodic flashbacks to a backstory that never comes up again, performed in a misty white void while soap opera melodrama dialogue is read with all the inflection and emotional commitment of a third grader reading their first book report aloud in front of the class.

Plus, there's something almost charmingly straightforward about the kill sequences, which - one after the other - feature random women wandering into a dance studio, loudly announcing their full name, then being murdered almost immediately. 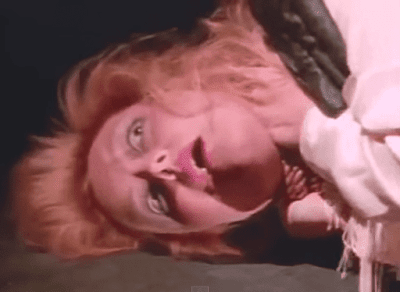 Sometimes meat and potatoes is the way to go.

Unfortunately, Slash Dance isn't just its first thirty minutes. There's a full hour to go (the audacity, by the way, to make a movie called Slash Dance more than 81 minutes long), and that hour gets increasingly more tedious and stilted once it goes along. For one thing, the kills, as un-gory and lame as they were to begin with, dry up for what feels like 45 minutes, but the worst sin is that the many, many interchangeable dancers we meet aren't even on the chopping block. Why introduce a crop of young nubile women that don't have two character traits to rub together and not include them in the body count? It's ludicrous and lazy, and what these characters get up to in the meantime when they refuse to be murdered is some of the most stultifying padding you ever did see.

As one might expect, we're treated to a lot of dance sequences, but this ain't no musical. We are privy to dance rehearsals, which show us watching the same women perform the same sequence of moves dozens of times over, counting "five-six-seven-eight, five-six-seven-eight" with no musical backup. And they're not even good. It's just minutes upon minutes of vague gyrating, practicing for a show that we never find out anything about, though it couldn't possibly be good.

These are intercut with guerrilla street footage of the Hollywood streets, the audio track removed because they probably knew having a boom mic would be too suspicious and they were either too lazy or too cheap to get the most basic of foley cityscapes. It's mind-numbingly bad, whereas the first third was sort of cheerfully inadequate. There was enough good and bad-good in that opening act to prevent me from hating the experience of watching the movie altogether, but you could easily shut it off an hour before credits roll, not knowing who the killer turns out to be (who could care - there are barely any killees), and be perfectly content with your life.

Killer: Logan (James Carroll Jordan)
Final Girl: Tori Raines (Cindy Ferda)
Sign of the Times: At one point during the endless city footage, we see a movie theater marquee playing A Fish Called Wanda.
Best Kill: Amos' death - when he wants to stage a suicide with a prop knife that has been unknowingly replaced with a real knife - actually has a modicum of tension and irony. And for some reason, it provides a stellar life insurance windfall for his brother, though lord knows why anyone would have insured Amos in the first place.
Scariest Moment: The killer briefly appears in a creepy black gimp mask.
Weirdest Moment: A biker is preparing to attack Tori, so he removes his eyebrows.
Champion Dialogue: "Rupert is the name, a poet as free as the ocean wind. And like a chiseled rock, I shall reveal my cock!"
Body Count: 5
TL;DR: Slash Dance is a waste of a hell of a bonkers first act.
Rating: 4/10
Word Count: 1186
Also sprach Brennan at 8:25 AM