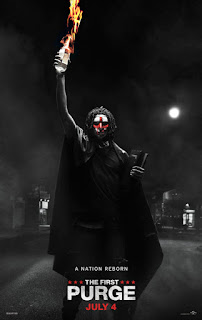 The Purge franchise and I have a very special, very troubled relationship. The original Purge was the first film I ever reviewed on this blog, so its rise is inextricably linked with mine. And you know I love me some political subtext in my horror movies. But as the franchise go on the subtext becomes text and that text becomes ridiculous. So I equally look forward to and dread each upcoming entry for the new heights of shameless browbeating, exciting inclusivity, and further demolition of the very concept of subtlety. It's a delicious combination of love and disappointment that keeps me coming back. 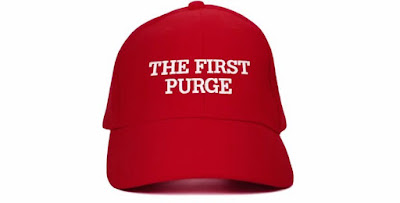 The First Purge tells the story of, well, the first Purge: the experiment that began the yearly 12 hour holiday of punishment-free crime and catharsis that has come to define America in the near-future. Spearheaded by apolitical psychologist Dr. Updale (Marisa Tomei, who is in the movie so little that I think she legally qualifies as an extra) and the deliciously villain-named Arlo Sabian (Patch Darragh), the Chief of Staff for the New Founding Fathers who have recently taken office in the White House.

The first Purge will take place on Staten Island, with the residents enticed to stay with a financial incentive. Certain, more unstable individuals like the crackhead known as Skeletor (Rotimi Paul) are also granted additional money for each person they kill during the experiment. Let's just say the experiment is getting goosed a bit so it goes well for the White House, who want to eliminate the lower classes as efficiently as possible.

The lower classes we're concerned with in particular are brother and sister Nya (Lex Scott Davis) and Isaiah (Joivan Wade), their neighbors in a prominent housing project, and the drug kingpin Dimitri (Y'lan Noel, who you may know from being super hot, but also from Insecure on HBO) who used to date Nya before she turned to a straight and narrow life of poverty and activism. 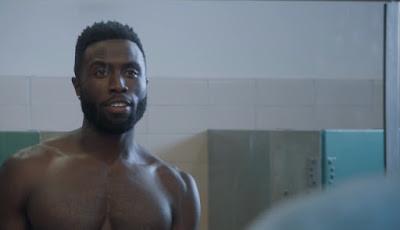 Although any decision that leads you away from the most ripped man in Staten Island is probably a bad one.

This movie could have walked right into that "The Worst Purge" joke, and luckily it avoids that pitfall, but it doesn't rise far above "adequate" at any given moment. There are certain traditions that the Purge movies have become very good at that it continues, for certain, but it also doubles down on some of the worst habits of the franchise. But let's start with the good, I say.

For one thing, these movies always bring fresh new non-white-people talent to the board. Although this film doesn't have a particular standout like Election Year's Betty Gabriel, instead the entire cast provides a solid example of badass women and non-stereotyped men. By positioning ethnic minorities and lower class individuals as the protagonists, as they have in the last two or three entries (of course the original film had to follow a wealthy white family, this is the horror genre), they always bring a solid crop of young actors-to-watch, giving them a chance to finally grab the spotlight by being leads instead of being eleventh billed in Tyler Perry movies.

I commend this decision making, as always, though The First Purge seems unaware of the exact implications of positioning a drug kingpin as the hero of the story. He is just as culpable of killing minorities and terrorizing poor neighborhoods, but we're supposed to trust that the people he kills are the right ones, at least by the end. They toss a couple lines in the direction of that particular wrinkle, but mostly they don't seem to be aware of some of the deeper meanings they're creating. 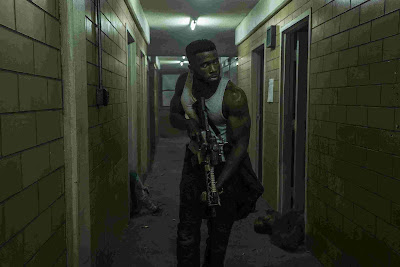 Look, I know his guns are distracting, but you need to focus on the GUN sometimes.

The other good thing that keeps this film consistent with the franchise's milieu is the pretty unimpeachable visual and audio design. There is one particular sci-fi design choice I don't like (certain participants of the experiment are using video-recording contact lenses that give them goofy glowing eyes), but the masks they showcase here are - as ever - creatively creepy to the millionth degree, and the sound design that ignites the beginning of the Purge is still a chillingly grating bit of sonic shrapnel that sinks deep into your bones.

You may have noticed that I keep undercutting my compliments, but that's the rub of The First Purge. It is aggressively devoted to averaging out, sanding off the edges of anything worth watching. To be fair (or not, let's point some fingers), lots of material seems to have landed on the cutting room floor. There are a half dozen subplots and characters that practically never appear again or completely fail to have a showcase moment (especially in the case of a trio of old men who are clearly set up to be the Mykelti Williamson of this movie, but completely vanish before they get a chance to). It's a messy plot at best, a disastrously compromised one at worst.

And at the very worst, you have Marisa Tomei, who isn't technically slumming it because I don't think she's actually in this movie. We get to see her walk a little, stand a lot, and mumble a couple words before she's unceremoniously shoved from the movie. This is not how you treat your only established cast member, folks! I'm sure they could only get her for a couple days, but give her something to do for one of them! 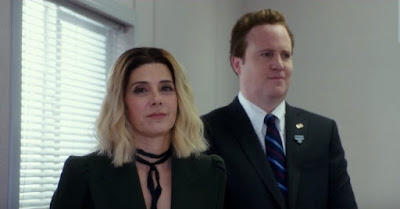 Other than rock awesome wardrobe pieces from The Craft.

The thing about genre movies is that its strengths and flaws all rely on the bedrock of action or terror to support them, and The First Purge doesn't have much of either. The third act conflict is set within an obnoxious strobe light gag that I disliked for more reasons than my photosensitivity, and most of the Purge Night shenanigans don't really match the mania and almost beautiful phantasmagoria of previous entries. It's just enough to keep you invested in the basics of the plot and characters, but that's all you ever get.

It's not the worst Purge by a long shot, but it's the blandest Purge, and that's almost worse because these movies are nothing if not zesty.