How Could I Resist Ya? 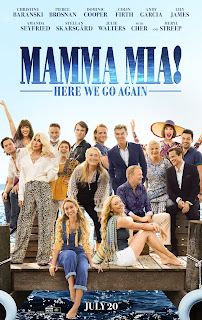 I don't wanna talk about things we've gone through, but as a reviewer it's kind of my obligation. The 2008 Mamma Mia! is a frankly disastrous film adaptation of a shallow but fun stage musical based on the songs of Swedish disco supergroup ABBA. Nevertheless I love it, for reasons almost entirely separate from the movie itself. And I couldn't help but be excited for its ten-years-later sequel, for the twin reasons that it's a movie that should never have existed (the type of thing I'm unduly fascinated by) and that I love the ABBA discography, and going deeper into it is far more rewarding than just skimming off the top of ABBA Gold like the last film did (for more of my thoughts on that, check out my first contribution to one of my favorite film sites: Alternate Ending). Also Cher. But I could have never predicted what I actually got, and I'm all the more dazzled by that. Let's jump in. 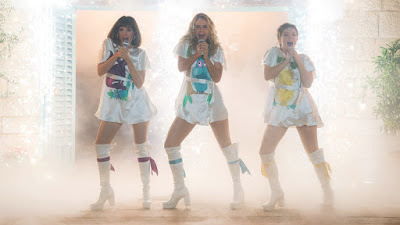 Because if there's one thing that's incredibly safe and comfortable to do in those outfits, it's jumping.

That history book on the shelf is always repeating itself, which is how we got this belated sequel in the first place, but the notes of Here We Go Again's plot are still somewhat unfamiliar for this particular glittery universe. We meet up again with Sophie Sheridan (Amanda Seyfried) on the eve of the grand re-opening of her mother's hotel on the Greek island of Kalokairi. It has been a year since Donna Sheridan (Meryl Streep) has passed, of causes unknown (though the random screengrab of her white-knuckling a glass of wine that's hanging on the wall might offer some clues), and she and one of her three dads Sam (Pierce Brosnan) are still heartbroken over it.

Those happy days, they seemed so hard to find, but never fear! Our old pals are back to play, including Sophie's beau Sky (Dominic Cooper), her other two dads Harry (Colin Firth) and Bill (Stellan Skarsgård), and her mother's glee team Rosie (Julie Walters) and Tanya (Christine Baranski). Joining them are Andy Garcia as the hotel manager Fernando (gee, I wonder when that'll turn out to be important) and Cher as Sophie's absentee grandmother Ruby. As Sophie tries to navigate into the newest stage of her life, she finds that her story is mirroring that of her mother's way back when in 1979, as played out by Lily James alongside younger versions of Rosie (Alexa Davies) and Tanya (Jessica Keenan Wynn) as she flirts with and beds future dads Bill (Josh Dylan), Sam (Jeremy Irvine), and Harry (Hugh Skinner). 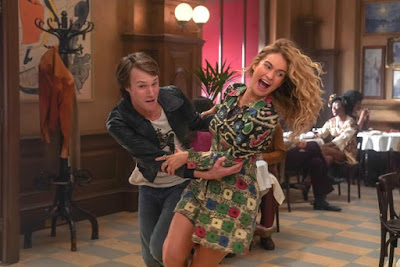 Although it's possible she didn't know they were three separate people, because they all look more or less exactly the same.

It was like shooting a sitting duck to make a Mamma Mia! movie that I'd actually enjoy, whether it was incredible, terrible, or anything in between. But the absolutely terrific thing about Here We Go Again is that it edges up against incredible, at least on the admittedly very adjusted scale that comes from being in continuity with Mamma Mia!.

Having the time of your life is obviously the movie's biggest priority, and there are certain aspects in which the movie fails as a whole in its efforts to achieve this. For one thing, the narrative is completely inert. Sure it has more thrust and structure than the previous entry, but that's like saying you have more character drama than a Transformers movie. It's not exactly an achievement. Most of the movie, at least in the present day scenes, is just about people sitting around waiting for a party (which I could relate to, having gotten to the theater an hour early). And the flashback sequences are slavish retreads of the exact material implied by dialogue and lyrics from the original (the "walk along the Seine" line from "Our Last Summer" even gets a totally superfluous nod). And yet, the way the film connects Sophie's experience with her mother's miraculously achieves a sort of tenderness and genuine emotion of which I would have previously thought this franchise completely incapable.

But I won't feel blue like I always do, because this movie has so much more to offer than a mere story. For one thing, it has a director who actually seems to know how movies are made. The first time the camera moved in a scene, I almost jolted out of my seat, because that never happens in the original. Mamma Mia! just plunks down on a tripod and lets its cast of high wattage stars do their karaoke. In Here We Go Again, Ol Parker's camera roves around the set, snatching glamorous and sometimes even glorious images from the tumult of turquoise and glitter. It's entirely refreshing and allows the manic energy of the material to be captured in a way that actually highlights and accentuates its key components rather than sitting back from the material and letting its gaudiness shine through.

The picture clear, everything seems so easy to Parker, who crafts a musical theatre spectacle like his life depends on it. It helps that he doesn't have to rely on the A-listers who wander in and out of the present day portion like they're in one of the Netflix seasons of Arrested Development. He has the freedom to keep them around as their schedules allow, toss them a few bones here and there (thankfully, not too many are caught by Pierce Brosnan, who has not taken singing lessons in the intervening decade), and focus his best on the young, relatively unknown cast in the 1979 sequences. Because their characters are attached to the famous people, he knows audiences will still care, and his casting could focus on actual talent and not star wattage. And they sure are (mostly) talented! Some of the boys sing a little too emphatically, like they're worried they'll be fired if you miss a single syllable, but the production numbers (especially "Waterloo" and "Why Did It Have to be Me?") are lovely little trifles with grand choreography that utilize every little element of the setting and create imaginative dreamscapes that remind one of the best of classic movie musicals. 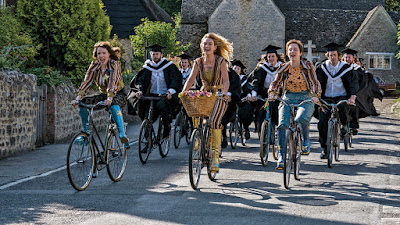 Although, as much as I love the song "When I Kissed the Teacher," what compelled them to include such a track in 2018 is still a mystery to me.

Would you laugh at me if I said I cared for Lily James' outfits more than most human beings? Costume designer Michele Clapton knows how to make the human body look cinematic, and Lily James is the perfect canvas for some of the best movie costumes of the decade, perfectly flowy and retro yet effortlessly modern and stylish at the same time. But I digress. This is a musical, let's talk about some more music! Here We Go Again resists temptation to repeat too much of the original soundtrack (of the canonical songs that appear in the actual film and not the credits, we just get "Mamma Mia," "Dancing Queen," an expanded "I Have a Dream," and a blissfully brief reprise of "S.O.S." with the rest of the songs being relegated to the instrumental score during dialogue scenes), and pulls some truly special, unexpected tracks like "Andante, Andante" and "Angel Eyes," two songs I love so much I could't help but thrill with delight.

All my sense had gone away, but I can still admit that there are certain... flaws in more than just the plot. There's still a bit of abrupt song introductions and flat singing (Brosnan and Cooper being the worst perpetrators), Seyfried is sleepwalking so hard you can practically see the drool, and Cher is a lot of things but she's not particularly convincing, as much as I love the fact that she's here at all. And it's a little hard to ignore the fact that they seem to have forgotten that Colin Firth's character is gay (the biggest mention of his character's sexuality is secreted away in an end credits stinger), and that the glitz and glamor of this musical about rich tourists ignores the economic plight of the Greek people they use as props (the film has one scene about fishermen being out of work, and it's used as an excuse to get a character a boat). I'm not saying they're bad for not mentioning it, I'm saying they shouldn't have introduced the concept in the first place if they were going for full musical theater fantasia, because it introduces a bit of a rankling cognitive dissonance.

But the destination makes it worth the while, because - especially in the second half - Here We Go Again is actually genuinely funny as well as entertaining spectacle. The script is much stronger this time around, building gags and character dynamics out of the thin air that was the original characters. Plus, Baranski and Walters (and their younger counterparts) are given some material that's actually quite dirty instead of innuendo so subtle that Christian Grey would even be scratching his head. So, let's add this all together. Terrific, non-obvious ABBA songs, actually talented cast members, solid humor, a director with a head on his shoulders, colors that pop, and a heartfelt emotional throughline? Are you sure this is a Mamma Mia! movie?

Knowing me, knowing you, it's the best they can do.