Reviewing Jane: To Be Fond Of Dancing Is A Certain Step Towards Falling In Love 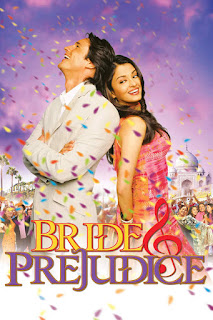 I was a bit nervous going into Bride & Prejudice, a movie that announces its strict adherence to adapting the Jane Austen novel by only changing one letter in the title. As you may have noticed, I've sat through more than my share of Prides and Prejudices lately, and I wasn't certain I could stomach another straight adaptation right at this moment. But I do it all for you, readers who accidentally stumbled across this review while Googling pornographic videos. And I sure am glad I did. Let's get into it.

My face when pressing play.

Bride & Prejudice transplants Jane Austen's most famous love story from Regency era England to modern (read: mid-2000's) India, specifically the small town of Amritsar. Lalita Bakshi (Aishwarya Rai Bachchan) is one of four sisters dominated by a mother (Nadira Babbar) who is obsessed with marrying them off. When a rich American-Indian named Balraj (Naveen Andrews) returns home for a friend's wedding, Lalita's sister Jaya (Namrata Shirodkar) falls head over heels for him.

Along for the ride is Balraj's white friend William Darcy (Martin Henderson of, weirdly, The Strangers: Prey at Night), a pompous hotel magnate who strikes up a tentative flirtation with Lalita despite his evident distaste for the non-American customs of Amritsar and the interference of hot young thang Johnny Wickham (Daniel Gillies), with whom he has a sordid past.

I have made the point before that a Jane Austen movie is only as good as its dance scenes. Balls and dancing are integral to her work and understanding the characters and their dynamics, and any movie that gets this will rise to the top. Bride & Prejudice not only understands this, it translates it into the hypercolored musical world of Bollywood, in which music and dance are just as essential, if not more. Combining these two storytelling modes is a genius fit, and not only does it frame the Pride narrative in a unique and engaging way, it brings Western cinema the best Bollywood numbers it has ever (and probably will ever) received.

The opening dance number, which is set during a traditional Indian wedding, is a glossy spectacle that lasts for a full five minutes, effortlessly introducing you to the characters in the midst of a shimmering, jaw-dropping marathon of choreography that will leave you transfixed. No other number in the film is quite as good as this, but they all maintain its level of fizzy, summertime fun. The design of this movie is exquisite too, really indulging in the brightest fabrics and flowiest garments the nation has to offer.

The Indian setting doesn't just provide the genre, either. Chadha and her co-writer Paul Mayeda Berges utilize the culture to really dig deep and engage with Austen's narrative at its highest level, adding layers about arranged marriage and imperialism that the author wouldn't have dared to tackle so boldly in her time.

And then there's that other thing Austen would never have dared to do, which is the way Chadha wields the female gaze like a broadsword, populating the movie with scantily clad, wide-shouldered men to gaze at in awe and wonder.

As lovingly giffed by the good, thirsty folks who run the Internet.

Sure, Bride & Prejudice has its flaws. A lot of the glossier sequences get all 2004 all over the place and end up looking like the "Stars Are Blind" music video on loop. And the story really loses its dramatic thrust in the first act, its modernization of the source novel's events finally losing its grip and undercutting a key event by muddying up the character motivations and preventing the lovers' final reunion from being particularly satisfying. Even worse, this reunion is presented via the worst, most awkward middle school hug you've ever seen, lovingly plastered across the screen in sloooooow moooooootioooooon.

But who could possibly complain for long when faced with a movie this bright, funny, and thoroughly charming? Bride & Prejudice is a winning update of Jane Austen that blends witty satire with hard-hitting modern truths about culture clash and true love. And that dancing! Slumdog Millionaire might have the most widely known Bollywood number in modern memory, but Bride & Prejudice has "Jai Ho!" beat by a couple dozen country miles. It's an exquisite, uncompromising blend of cinematic traditions that has its cake and swallows it whole, too.