In anticipation of Ocean's 8, which stars pop star Rihanna and pop-starlet-I'm-not-totally-convinced-is-a-thing Awkwafina, I'll be reviewing Trick or Treat, a supernatural rock 'n roll thriller that features cameo appearances from rockers Gene Simmons and Ozzy Osbourne (though from the DVD cover, you'd assume they were the leads, maybe even love interests). 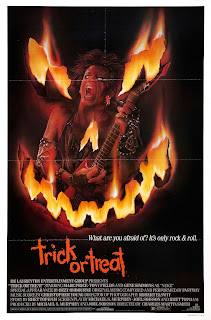 The rock 'n roll horror flick is maybe the most sub-subgenre of them all, but it sure was a potent one in the mid-80's. Plenty of shock-rock bands saw the slasher craze as an opportunity to build their audience, and while I'm pretty sure it only worked for Dokken, that didn't stop a lot of others from trying. Way back when in 1984, we got Sorcery doing their best at a supernatural revenge slasher in Rocktober Blood, but 1986 - when our new friends Fastway got in the game - was a whole two years later. And more importantly, there was an Elm Street or two in the meantime to give them some ideas. Thus, Trick or Treat was born, and boy oh boy does it not star Gene Simmons and Ozzy Osbourne. Not even a little bit. 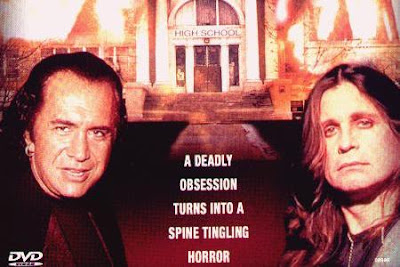 Who it does star is Marc Price as Eddie Weinbauer AKA Ragman, a rock-obsessed teen whose world is torn apart when his idol, rock god and alumnus of Eddie's high school Sammi Curr (Tony Fields, who also appeared in the Michael Jackson videos "Thriller" and "Beat It") perishes in a hotel fire. Eddie has been having some troubles with bullies, especially the Cobra Kai reject Tim (Doug Savant of Desperate Housewives), so when he discovers that his radio DJ friend Nuke (Gene Simmons) has a rare pressing of Sammi Curr's final track, he is delighted to find out that it contains backmasked messages (ooh, spooky) that resurrect Curr's soul into a demonic revenge spirit.

They shoot for Elm Street and end up at Shocker, with Curr zipping around through radios and electrical wires to murder people with the power of sheer thrashing rock 'n roll, but mostly by electrocution. Curr's attempts to poison Eddie's mind are somewhat hampered by Leslie (Lisa Orgolini), a straightedge chick who has sympathy for the boy. Curr's warpath ends at the Halloween dance, where a planned concert of his was cancelled by concerned parents. And... that's pretty much it.

Only that isn't it. Trick or Treat has a barbarically simple plot (rock 'n roll is bad and belongs to the Devil), but it's augmented with a whole lot of supernatural tomfoolery that is simply special. This movie is made by the little details, and it's chock full of them, from a spectacular yet not ostentatious moment where flames ignite in two jack-o-lanterns to the balls-to-the-wall effects showstopper where a girl unwittingly hooks up with a rubbery, tongue-lolling demon in the back seat of a car. It's so bonkers at so many points that it more than makes up for the repetitive nature of a lot of its early scenes (Eddie is bullied, he sorta considers killing a bully, he doesn't, rinse, repeat).

Unfortunately, while Trick or Treat is a lot of things, barely any of them is an actual slasher. This really was what I like to call a White Knuckle Census Bloodbath pick, because at every point that it feinted toward being a body count movie, it would pull back with an "oh, I'm alive, don't worry!" and go about its merry business. It wasn't until the Carrie-style carnage at the very end that it could even be considered a verifiable slasher entry, and even then it's dubious at best. But hey, I reviewed Road Games with its 1.5 murders as part of this project, so our parameters can be generous.

Even though it's clearly in the Elm Street vein, the backloaded kills are far from creative, as well. Pretty much everyone gets doled out the same demise: being electrocuted into a puff of smoke. I don't know whether this was due to a lack of budget or a lack of creativity, but either way it's a frustrating noncommittal approach that really hampers a film that already hadn't quite earned that extra fifteen minutes inflating the run time. 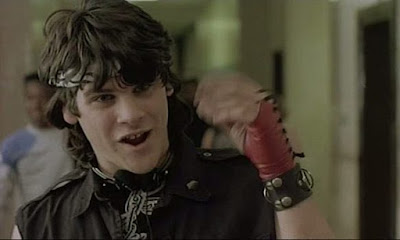 I could spend HOURS staring at this outfit though, so maybe it evens out.

But despite its deficiencies as a slasher, Trick or Treat is still a must-see for any fan of 80's cult horror. The effects spectacle is pretty much non-stop (a particular stand-out moment is when Sammi Curr scratches his fingerless gloved-hand across a TV, causing the talking head on screen to scream out in pain), there is a heaping helping of shirtless men for reasons I do not understand but do not question, and this movie has a title song. You can't go wrong with any 80's title track, but Fastway really pulls out all the stops with the demonically catchy track "Trick or Treat," which somehow makes their signature screech rock entirely bearable.

This movie isn't subtle at all, and it in no way explores the villain's motives other than "the Devil is in rock 'n roll," but you honestly don't need much more than that. And to be honest, Gene Simmons and Ozzy Osbourne aren't bad at all, the former as shock jock Nuke and the latter as the buttoned-up evangelist crusading against rock music. Simmons has a naturalism that makes me think he has a second career option up his sleeve, and Osbourne is completely transformed as his ironic opposite, tearing into the role like it's a delicious bat's head.

Overall, Trick or Treat is definitely a treat, even if my justification for including it in Census Bloodbath is wobblier than most. But hey, when people get murdered in droves in act three, you can rest assured that I'll be there. Here's looking at you, Evilspeak.

Killer: Sammi Curr (Tony Fields)
Final Girl: Eddie Weinbauer AKA Ragman (Marc Price)
Best Kill: They're all kind of the same, I love the way the bully Tim explodes when he's getting his electrocution.
Sign of the Times: Eddie's friend Roger is so excited to finally have Call Waiting.
Scariest Moment: One scene opens with Roger contemplatively staring up a girl's skirt and stroking his chin.
Weirdest Moment: While he's being chased by bullies, Eddie knocks over a mop bucket, causing one of the bullies to slip and fly out a doorway and down the stairs like he's Wile E. Coyote.
Champion Dialogue: "Do you think I'm a wussy f**king weaktit?"
Body Count: 11; but it doesn't really feel like it.
TL;DR: Trick or Treat is a bit overlong, but a fun crazy 80's B-picture nonetheless.
Rating: 7/10
Word Count: 1269
Also sprach Brennan at 7:44 AM