In anticipation of The Incredibles, which weirdly seems to be a remake of Mr. Mom featuring superheroes, I'll be reviewing Stepfather 2: Make Room for Daddy, another sequel with a twisted sense of fatherhood. 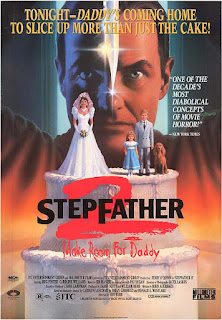 If there's one subgenre and time period in the world that would guarantee a sequel to an even mildly successful film, it was the slasher movie in the 1980's. If we could get a Death Nurse 2 or a Stripped to Kill II: Live Girls, it's certainly not surprising that the 1987 Hitchcockian thriller The Stepfather got a follow-up entry two years later. In fact, nothing is surprising about Stepfather 2: Make Room for Daddy, except the fact that it's maybe even sorta kinda good. 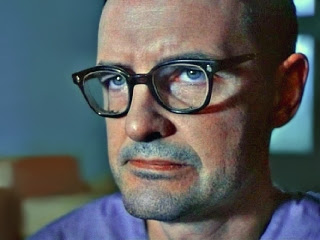 Also, maybe we should arrange another remake with Stanley Tucci, just sayin'.

You may recall that the previous Stepfather ended with the titular family-stealing slasher dying, but since when has that ever stopped a good horror villain? Terry O'Quinn returns to the franchise with a hand-waving scene that reveals he just got a nasty scar from being stabbed in the heart, 'twas only a flesh wound! Anyway, we catch up with him in a psych ward in Puget Sound (a psych ward which has a buzz saw that they let the patients use, because mental health care competency has apparently taken some huge strides between the 80's and now), a location which he easily escapes to build a new life for himself down in Loma Linda, California.

While he makes moves on Carol (Meg Foster), the lovely divorcée across the street, and attempts to assimilate himself into the lives of her and her son Todd (Jonathan Brandis), he must face obstacles to his new nuclear family. These obstacles include Carol's deadbeat ex-husband Phil (Mitchell Lawrence) and the nosy postal worker neighbor Matty (Caroline Williams of The Texas Chainsaw Massacre 2). 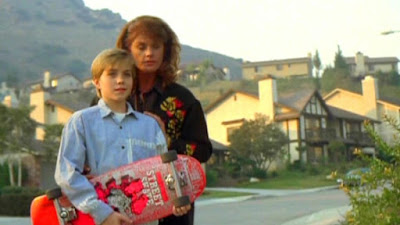 And who WOULDN'T want to fill the gap in this holy trinity?

By the very nature of being a sequel, Stepfather 2 inherently subverts the plot of the original. Whereas that film was a thriller of domestic paranoia, following Jill Schoelen's efforts to expose the man in her house whom she suspects is a crazy evil killer man, in this film we sure as hell know he's a crazy evil killer man. Thus it becomes almost Psycho III-esque, where the tension transfers from siding with the victims and worrying about their fates to sympathizing with the killer himself. You watch as he attempts to rebuild his life and tie up any loose ends to his perfect marital bliss, and you're biting your knuckles along with him as various wrinkles threaten that delicate balance.

Plus, since the slasher subgenre had gotten more of its claws into the franchise, this is also accompanied by a bump in the body count, easily doubling the previous effort. You won't catch me complaining about that. Although the original Stepfather is certainly one of the more respectable 80's efforts, it's not one that particularly spoke to me, so I don't mind it being beefed up with some popcorn chills and spills.

Mind you, even the improved kill-pacing of this entry still doesn't provide for many particularly memorable murders. Stepfather 2 is a deeply generic slasher through and through, and the well of blood the genre had to offer had long since dried up by 1989. The film demurely hides its gore behind tasteful pans to pools of blood, as if that was what would get the goat of any audience member sitting in the theater for a movie with the subtitle Make Room for Daddy. Stepfather 2's refusal to cop to being a tawdry B-picture prevents it from rising too far above being merely "good," but for 1989, it was probably the best case scenario if we're being honest. 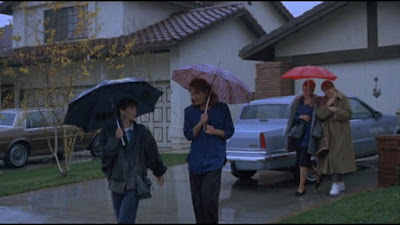 Though the fact that I can't really find a screenshot more eye-catching than this should speak volumes.

All that said, this is probably the best horror film director Jeff Burr ever made (though with the chopped-to-hell Leatherface: The Texas Chainsaw Massacre III kicking it right there on the CV, there's not a ton of competition). There are fun little moments like the neighborhood group therapy that devolves into a catty gossip session, or the Stepfather's quasi-Freddy quips that are funny yet still grounded enough in his character that they don't break whatever reality this film could conjure.

Plus, in the third act Stepfather 2 becomes an actually good film, depicting a wedding chapel battle that sees every piece of the Stepfather's story falling apart in a massive crescendo of confusion as Carol and Todd (who aren't as fleshed-out as they should have been) really coming into their own as a family unit amid a flurry of exciting, well-staged action.

Stepfather 2 isn't really anything more than a generic slasher, but it's like eating a cookie from a box you got at the grocery store. It isn't delicious, but it hits the spot. It checks all the boxes of what a movie like this needs to have, even if it isn't as bloody or as sexy as it could have been.

Killer: The Stepfather (Terry O'Quinn)
Final Girl: Carol Grayland (Meg Foster)
Best Kill: The doctor who gets a shiv in the back of the neck is the only gore moment that in any way feels even next door to showstopping.
Sign of the Times: The Stepfather scouts potential wives using a videotape dating service.
Scariest Moment: In the heat of the moment, Carol makes out with the Stepfather's giant chest scar.
Weirdest Moment: While eating cereal, the Stepfather takes a moment to lean his ear close to the snapping, crackling, and popping and grin to himself.
Champion Dialogue: "He likes me to hum when I kiss him down below."
Body Count: 6
TL;DR: Stepfather 2: Make Room for Daddy is a surprisingly decent late slasher sequel.
Rating: 6/10
Word Count: 1090
Reviews In This Series
The Stepfather (Ruben, 1987)
Stepfather 2: Make Room for Daddy (Burr, 1989)
Also sprach Brennan at 8:36 AM