Popcorn Kernels: Get To Da Choppa!

In which we review the Predator trilogy, because the forces of my life have conspired to make it a requirement to watch it. Keep an eye out for my Dread Central column and Geek K.O. podcast appearance, both about this franchise, both coming soon! 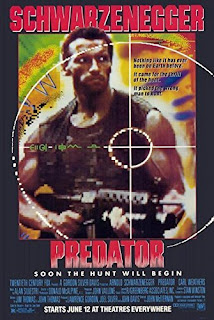 An elite military squad on a mission in the Central American jungle runs afoul of a bloodthirsty alien creature bent on hunting them down.

Predator sure is a boy movie, innit? This whole franchise has definitely been one of the biggest gaps in my genre film knowledge, and it probably stems all the way back to the fact that I didn't play with toy trucks as a tot. This movie is the cinema equivalent of a blue onesie patterned with footballs, assigning a great deal of meaning to the sheer act of existing as a biological male. We get doting closeups of biceps flexing during arm wrestling (mid-air arm wrestling I might add, the lamest way to go about that particular display), lots of sweaty yelling in sleeveless/fabricless/shameless military vests, and a whopping one female character who has maybe two lines.

You don't hire Arnold Schwarzenegger by accident. Predator knew what it was doing and it sure as hell went and did it. But I do have to say... The man certainly cuts a striking figure onscreen, but he's a liability the second he opens his mouth. And I'm not talking about his accent. Look, I super duper knew the man couldn't act, but watching Predator, it's not so much something you know as something you feel deep in your bones; a primordial, ancestral revulsion that leaves you quivering in your seat.

Simply put, Schwarzenegger is an enormous liability in this movie (in every sense of the word "enormous"). He has way too much dialogue that isn't quippy one liners, which he shoves out through gritted teeth like a constipated school principal. The rest of the cast is fine, although the only reason anybody but Shane Black is here is to wear a vest that shows off their biceps.

Honestly, I found Predator pretty boring. The non-action scenes are numerous and entirely indistinguishable. People mutter nonsense in an endless expanse of green jungle while walking around with machetes. It's not compelling visually or narratively, it just exists, in much wider swaths than one might hope. The action itself is totally fine though, especially when the gore quotient amps up about halfway through.

However, there is no denying that the Predator itself is an unholy triumph of monster-making ingenuity. Stan Winston sure as hell knew what he was doing when he put together the wholly inhuman look of the creature, both masked and unmasked. With the mask on, he cuts the figure of a space-age knight, and with it off he's an unnaturally fleshy collection of organic odds and ends that you just believe. That is the true triumph of Predator, and the reason the movie earned itself (god) five additional movies at this point. You don't get that without a cool monster, no way no how. 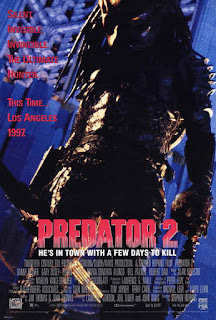 Because L.A. is the urban jungle, geddit?

That's about as deep as Predator 2 ever gets, not really utilizing its arbitrary near-future setting to make much commentary other than "things is violent in the cities." Instead, we get a Predator film grafted onto a Lethal Weapon as Danny Glover stalks through the LA streets taking the law into his own hands when the titular extraterrestrial gets in the middle of a gang war that tears through the city streets. This is emphatically not a bad thing.

Sure, Predator 2 is stupid, but so is Predator 1, and at least this movie has a kick-ass lady cop with actual dialogue. This is probably the only time director Stephen Hopkins has actually improved a franchise, but I'll take it. Predator 2 is weirdly demure in its violence (the 90's were a rough time for gorehounds), but the action is varied and fun (an early street shootout has some delightful stunt car work), kicking up the energy with its loony antics. And the dialogue scenes benefit from actors with actual charisma, including the reliably weird Gary Busey and the sniveling worm that is every character Bill Paxton played in late 80's.

The Predator's weaponry has also received an upgrade, and although his invisibility booster is still annoyingly on-the-fritz (I understand he needs to be invisible for a long time because that's expensive as hell otherwise, but the brief glimpses we get of the Predator early on are annoyingly obvious audience pandering), his new space arsenal is a creative expansion of the universe of the first film. Here, the design team turns traditional hunting weapons like nets and spears into alien weapons of mass murderization, combining the primitive with the high tech in a satisfyingly brutal way.

As always, the Predator is the most important element of this film, and they do get it right. Sure, it's an empty 90's action flick, but that's a sweet spot for bad-good cinema, so you won't catch me complaining. 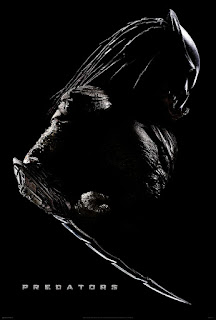 A group of strangers find themselves fighting for their lives on a Predator hunting reserve.

Is Predator the only trilogy that improves as it goes along? OK, probably nobody would agree with me, but I've finally found an entry in this franchise that I like! Predators is a delightful popcorn thriller, dumping a fistful of character actors (also including Walton Goggins, Mahershala Ali, and Danny Trejo),  into a scenario that's part Cube, part Lost, and full of Predator mayhem. Yes, these folks are also randomly wandering through a jungle, but this time there's actually a mystery to solve outside of "what is shooting us with lasers?"

Predators throws a lot of bizarre, dime-store Annihilation imagery at its characters before it reveals what's actually going on (given the title of the movie, it shouldn't be too hard to figure out), and the dynamics of the characters as they're funneled through a gauntlet of sheer revulsion and terror is a fun way to spend the plotty bits. And the cast really is game for bringing these crude, one-dimensional characters to life. Goggins channels his skills at chaotic evil, Trejo does his Trejo thing, I actually really like Topher Grace and he turns in some solid comic relief, and Adrien Brody gains 25 pounds of muscle and dang if that isn't a good distraction from how boring his character is.

Predators does fall apart somewhere in the middle of the third act, where the plot starts taking twists and turns that come out of nowhere to jostle the movie off its track, then vanish without a trace. But before that it's a tremendously satisfying one-time watch. Its subtext about how all the human beings themselves are "predators" falls flat too, but I can't say I expected much to start with, and at least it's trying something.

Then there's the Predators themselves! The design of the new Super-Predator isn't a particularly inspiring piece of work, but for the most part the film uses improved CGI to smooth out the very few rough edges of the classic design, and this is the first movie where the Predator's heat vision isn't incredibly crude and annoying. You can actually see what the Predator is seeing instead of chunky blobs of red and yellow that you can assume are Arnold Schwarzenegger because the blob has biceps.

All in all, Predators did it for me, and I'm not ashamed to admit that. At this rate, Predator 6: The Predating is gonna be an out-and-out masterpiece!