Popcorn Kernels: Ladies Doing It For Themselves

In which we review three female-led comedies I saw in theaters, again during a time I didn't have my computer readily available, so we'll do some short ones to catch up.

Life of the Party 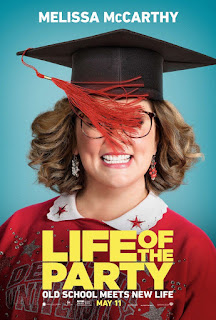 After her husband leaves her, a suburban mom returns to college to finish her senior year at the same time as her daughter.

So, I can completely understand why, but Ben Falcone keeps making movies with his wife Melissa McCarthy. On paper, that's a really sweet thing to do, but considering the quality of the movies they make together and how unjustly violent the physical humor within them tends to be, I can't help but worry that he might actually hate her with a burning passion.

Although this movie tones down the hardcore slapstick of their previous collaboration The Boss (she isn't falling down concrete flights of stairs in this one), there is a full three minute scene slammed right into the middle of Life of the Party's run time where we're meant to rejoice in her character sweating and flailing through an oral presentation while the camera coldly and impassively judges her every move. It's so uncomfortable and out of tone with the rest of the film that it's frankly repulsive.

That said, Melissa McCarthy is good at what she does, at always, though the material here really isn't serving her. The movie doesn't play with the fish-out-of-water nature of her character archetype nearly as much as it promises, instead packing the corners of this movie with cartoonishly wacky characters that don't really have anything to do with the premise. Don't get me wrong, these people are actually the highlights of the movie, but it's conceptually broken in a way that doesn't lend to it being a satisfying whole (literally, the character of her daughter vanishes for twenty minutes at a time, and we're meant to have any emotional reaction to their drama at the end of the movie).

These aforementioned cartoon characters include the delightful Gillian Jacobs as an older student who has just woken up from a coma and has no small amount of notoriety which she exploits to no end. We also get recent SNL standout Heidi Gardner as a spectacularly ill-conceived character that somehow works because she holds it all together with the duct tape of being f**king hilarious. Her character is named Linor, a name nobody can pronounce because they apparently never had a Poe unit in English class, and she's meant to be emo or goth in some way even though that character type is a decade old and she just dresses like a normal human being. It's confusing but I wouldn't trade her for the world.

And then there's Maya Rudolph as the best friend, who drops in every twenty minutes or so like a neutron bomb of comedy, ripping open the fabric of the movie for some bone-disolvingly hilarious broad humor that doesn't really have anything to do with the story we're actually watching. But honestly, any distraction from the blandness this movie traffics in is very welcome.

Life of the Party vacillates back and forth between decency and mediocrity more times than I can count, but overall I think its net value is positive. McCarthy's too-young love interest Luke Benworth is cute and delightfully earnest, there are more jokes than groans, and it didn't super overstay its welcome like most of the worst vehicles for this particular actress. So... don't go see it I guess. But if it ends up on Netflix and you need to kill time while folding laundry, why not click it on? 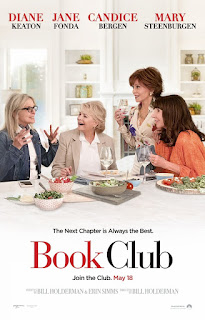 The way Diane Keaton folds the back cover of a book so far back that it wraps almost all the way around to the front again is a crime against nature that makes me wonder if she's ever used her hands to do anything in her entire life, or maybe recently got her bones replaced with adamantium and is having trouble adjusting. Honestly, I could end the review there, but I probably shouldn't.

Book Club is one of those pictures where a bunch of famous people get together for three scenes and then split off to have their own mini romantic stories, Valentine's Day style. It's nice that women of a certain age are being given material like this, but if only the material was any good at all. If I knew I had to choose between Candice Bergen making jokes about Internet dating that were old in 2002, Jane Fonda being a Samantha all over Don Johnson, Mary Steenburgen trying real hard to get railed by Craig T. Nelson mostly by tap dancing, or Diane Keaton pretending that Andy Garcia's character isn't an abusive asshole who literally threatens to crash a plane and murder her if she doesn't agree to go to coffee with him, I'd have chosen to see a different movie.

The film briefly comes alive when the women get together and sit around preparing heaping piles of hors d'oeuvres that they never eat, but for the most part Book Club is an inglorious train wreck: The light, jazzy score is like an out of control kaiju rampaging through the film and crushing everyone beneath its giant feet. The jokes in the script are so gentle that they avoid having punch-lines, because punching sounds too violent. These veteran actresses perform like they've just taken an Ambien and are impatiently waiting for it to kick in. There's a beleaguered metaphor with a cat that is supposed to represent Candice Bergen's vagina.

It's pleasant enough to sit through, like watching a mildly raunchy Claritin commercial, but these people deserve better, and that's just that. 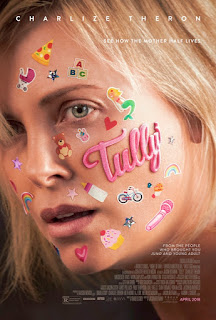 A downtrodden suburban mom hires a night nanny who changes her perspective on things.

So it turns out this is what happens when Diablo Cody stops making up ludicrous slang terms and starts getting real. A slow, almost neorealist journey through modern motherhood with almost a couple jokes that dissolves into a deeply weird third act that negates all the character development of the first two before tying on a bow that could have happened without any of that nonsense.

Tully seems to want desperately to be an art film, given the abortive mermaid metaphor they keep jamming in at random places that goes absolutely nowhere, but it just ends up being an even more punishing version of the slow, unyielding beats of the previous collaboration between this actress, writer, and director, Young Adult.

Much like Book Club, the only place Tully shines is in the chemistry between its two leads, the consistently powerhouse-y Charlize Theron and the bright young ingenue Mackenzie Davis, who is cropping up more and more in movies and TV series that are very good and right on the fringes of actually being massively popular. But other than that, Tully is too relaxed to find any narrative thrust until it's way too late.

Honestly, the only thing I truly liked about it was that we get to spend a minute listening to snippets from the entire She's So Unusual album from Cyndi Lauper. I guess that makes it a recommend because that album is great, but otherwise don't waste your time on this one.