Mr. Mom, Who Was Bitten By A Radioactive Mom And Now Has All The Powers Of A Mom 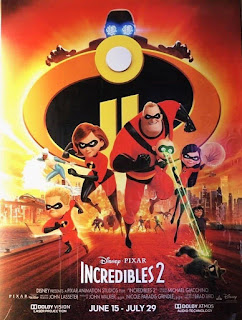 A quick caveat: That epilepsy warning is no joke. I have a photosensitivity, so the strobe effect that dominates three scenes lasting one to two minutes each prevented me from watching a certain portion of the film. Maybe those were the worst scenes in the movie or the best, but at any rate they don't factor into my review except for sound design I guess.

It's been fourteen years since the superhero family The Incredibles first graced cinema screens. It would probably suffice to say that the superhero movie landscape has changed since then, so I was interested in seeing how well the film played against the inundated landscape of the Marvel cinematic universe and its sickly basement-dwelling cousin the DC extended universe. Probably to its advantage, it doesn't change its stylized retro sci-fi gleam one bit. We sure get a lot of superheroes but we're still not getting that. 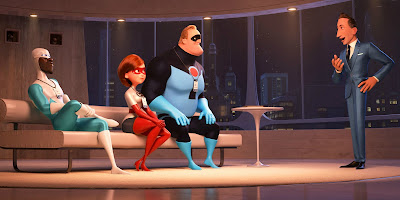 Angle-wise, there's just SO much going on here.

That is, until Winston Deavor (Bob Odenkirk) puts his hat in the ring. The wealthy telecommunications magnate is a fan of supers and has put together a plan with his inventor sister Evelyn (Catherine Keener) to hire Elastigirl for an underground PR campaign showing the world just how necessary superheroics are. While she heads off to the nearest metropolis to begin work, Mr. Incredible is left at home with the kids, which would be overwhelming even if the baby Jack-Jack (Eli Fucile) wasn't developing, oh, every power in existence.

Conveniently, this Elastigirl gig is timed with the rise of the Screenslaver, a freaky masked villain who uses screens to hypnotize people and is hellbent on tearing a lazy public away from the television they seem to worship. She sets off to stop the Screenslaver while Bob stays home with the kids. You know, just like the woke cinema classic Mr. Mom!

This is also maybe the freakiest thing ever included in a Pixar movie and they literally made two movies about monsters.

I obviously wasn't super sold on the Mr. Mom angle the trailers made apparent. It still reeks of the mentality that women in the workforce is a bizarre novelty and that men are dumb cavemen idiots who can't parent their own children. The most recent incarnation of this story was that soul-bleachingly mediocre Matt LeBlanc sitcom Man with a Plan, so I can't say I had high hopes.

Luckily, Incredibles 2 doesn't foreground the gender normative elements I was worried it would. It tells a story of the universal struggle to be a parent, with the chaos of having a newborn baby amplified by Jack Jack's powers. He can multiply his body, set the house on fire if he doesn't get a cookie, and his atomic sneezes send him phasing through various walls and ceilings. He's uncontainable and every parent's literal nightmare.

Naturally, he continues to be the best part of the film, and his mini-fight scene with a raccoon is maybe the best superhero moment in cinema this decade. But the other characters are all given a lot to do, with the exception of maybe Dash, whose energy generates a whole lot of fun, but it's all sugar and no substance. But yes, once again the family is at the center of the film, their characters and dynamics being the primary driving force of the story, aided and abetted by all the useful metaphors that superheroics can provide. 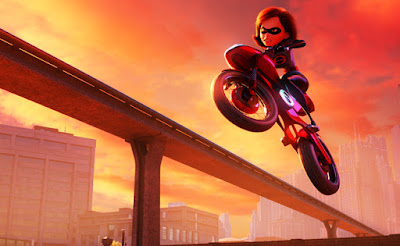 But although they're certainly not the crux of the story, those crime-fighting sequences really are exciting. They run the gamut from Spider-Man 2 setpieces to James Bond high camp villainy to good ole "capable people work together to prevent a disaster," and it's probably the best choreographed and edited animated action in American cinema, followed far behind by maybe Big Hero 6 and almost nothing else. Incredibles 2 is so fun and splashy that it makes you forget that we've already gotten a Black Panther, an Infinity War, and a Deadpool 2 within the past eight seconds. It's popcorn movie magic at its finest, using the limitless imagination of animation to deliver some impossibly dazzling stunts.

It maybe lacks the depth of the original film's more concrete, well-thought-out storyline, but I'd be hard-pressed to look at this year's slate of summer films and see anything that will be remotely as exciting and fist-pumping as this triumph, the best non-Toy Story Pixar sequel to date, and most likely in perpetuity.

A Note on the Short Film Bao: I'm obviously very glad that Pixar has started to realize that other cultures can and should be represented in animation, and this video about an anthropomorphic dumpling is certainly working Pixar's formula in a unique way - from its soft, stylized character designs to its casually magical, circular narrative. It's certainly very cute and a lively dialogue-free effort in visual storytelling, but I found the central metaphor to be more than a little bit ruined by the narrative turn it takes in the end, which for me undermined the story I thought I was watching. But nevertheless, a worthwhile effort that is no "Piper" but it's certainly no "Lava," so I'll take that middle ground any day. 7/10