Arrow in the Head: One Flew Over The Dodo's Nest

The time has come! My second official Arrow in the Head review has been posted! I had to throw in a Kate Beckinsale reference to appease my straight audience, but otherwise it’s my bona fide opinion on the 2015 indie release Dementia. 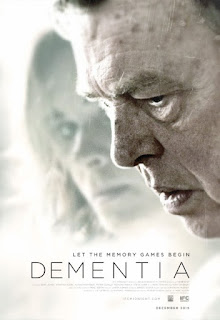 Additional Notes: This really wasn’t my cup of tea. It’s just another one of those films with a plot like a clear day. You can see every twist coming miles in advance, and they’re usually not that satisfying to begin with. As I mentioned before, I hate the movie Session 9 with every fiber of my being despite the fact that it’s pretty widely acclaimed. Dementia kind of reminds me of that film with its rudimentary psychological thriller machinations, so I’m sure somebody will love it. It sure as hell ain’t me though.

There’s basic flaws in its construction of reality (have you ever tried to subtly FaceTime someone? That noise could wake the dead), its continuity, and even its sound mix. The dad character looks and acts more like the daughter’s boyfriend, at least in the opening scene, and the veteran character abruptly shifts his entire personality with no motivation.

Dementia is constantly shifting, but not out of an attempt to create an atmosphere. It literally has no idea what’s going on in its own story and it’s immensely frustrating. But at least it’s better than The Sand.

TL;DR: Dementia is an unfocused, boring attempt at a psychological thriller.
Rating: 4/10
Word Count: 942
Also sprach Brennan at 8:48 AM