Alright, mini reviews are going to be a thing that happens from here on out. Although I will lavish my usual extended attention on marathons, current flicks, and Census Bloodbath features, I just don’t have the constitution to pen epic treatises about every single film I see anymore. I remain committed to reviewing everything that passes through these eyes, but not quite in the obscene quantity of previous months. That said, let’s hit the town with a pair of alternative Julia Roberts flicks for the sophisticated palate. 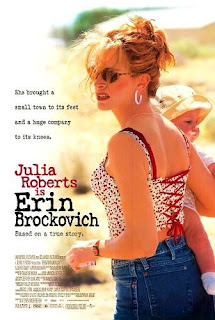 The true story of a poor single mom who endeavors to provide legal help for a town being poisoned by a nearby factory.

Frequent readers will know that biopics really aren’t my cup of tea. If I want to step into a movie to escape boring reality, I don’t want to be forced to sit through anybody else’s boring reality, no matter how loud they shouted in the 90’s. Maybe that’s reductive, but for me truth is lamer than fiction. At least as a general rule of thumb.

That said, Erin Brockovich is pretty OK. Is it about half an hour too long? Definitely. Is it self-indulgent? Sure. Does Aaron Eckhart work in the role of a mutton chopped biker daddy? Hell no! But, like her or not, Julia Roberts is a damn movie star. She holds sway over the camera like a mystical snake charmer, no matter what role she has taken on.

This role in particular is a real boon to her talents. Breaking from her America’s Sweetheart persona, Roberts’ Brockovich is no apple pie-baking princess. She’s a crass, vulgar woman who dresses to show off her body and doesn’t take no guff from nobody. But she is also a woman of depth and compassion who makes great personal sacrifices for people in need, recognizing that same need in her own past. The film is a truly intriguing character study of a woman who refuses to let the world change her and pushes back against the polite, civilized society that is content to sit idly by while the citizens of a small town waste away of cancer and other maladies.

Roberts pours her heart into her depiction of this woman, proudly wearing her flaws on her sleeve. It’s a brave and open performance that never indulges in the jingoistic sentimentalism of many biopics. Moments like Erin discovering that she has missed her child’s first word are raw and real without a Hollywood gloss. It’s about as gritty and intense as that other Aaron Eckhart movie, come to think of it.

Director Steven Soderbergh, who I must confess I’ve never had any particular affection for, captures this story with an Americana flair that’s gorgeous, if a little needless. The preponderance of suffuse backlight and American Beauty-esque electronica make the whole affair seem like an ethereal dream, and the jaundiced yellow that inexplicably infects every one of his films provides an appealing counterpoint to the cool blue nighttime scenes. I wouldn’t argue that the aesthetic serves the story for better or for worse, but at least it’s nice to look at.

So, yeah. A pretty good biopic. By my standards, that makes it a classic of the form. While I shan’t be revisiting this film anytime soon, or – if I can get away with it – ever, I don’t regret the wand’ring hours I spent with one Miss Brockovich.

Sleeping with the Enemy 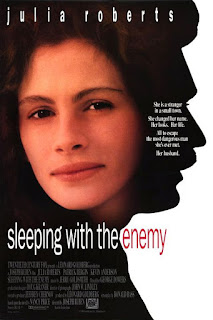 After a woman fakes her own death to escape her abusive husband, he doggedly pursues her while she tries to establish a new life.

Every year for Halloween, Sergio and I have a double feature of spooky movies. Each of us gets to choose one, and Sergio’s pick this year was Sleeping with the Enemy, the Julia Roberts thriller. I reluctantly conceded to this decision, because the alternative was Titanic. Let’s just say my hand was forced. However, you can imagine my surprise when the 1991 flick betrayed more than a little carryover from the tropes and traditions of the slasher genre, which had hit rock bottom with a resounding splat but two years earlier.

While Sleeping with the Enemy is about as far as you can get from a body count movie (in an unlikely turn of events, even the obvious cannon fodder character is spared), the film draws from the spiritual core of the horror subgenre. While it’s essentially a character drama with a little raw tension for flavor, it’s cut from the same thematic cloth as flicks like Friday the 13th or Prom Night: What if a relentless, all too real stalker was hellbent on tearing your life- and your body – apart.?

To achieve this atmosphere, Sleeping with the Enemy rummages through the slasher’s bag of tricks. Even in innocuous scenes, the filmmakers continuously impose a sense that Julia Roberts’ Laura Burney is being watched. Sam Raimi-esque steadicam slinks around her home, reminding audiences of the unnerving POV shots from serial killers like Michael Myers and his brood. Many scenes also end by slowly pulling away from the action, a move that horror-savvy viewers instinctively expect to telegraph a lurking killer abruptly lurching into the frame.

The stalker is even given a distinctive calling card – he wears Laura’s wedding ring on his pinky finger next to his own, a gracefully creepy touch that does wonders for the heart rate. And the finale scene is practically pulled from the pages of Scream, which would jab an adrenaline shot into the dead slasher’s heart five yeas hence.

This is all rather effective, because although the tools come from a lowly and unloved genre, they had become a major facet of the cinematic lexicon. By reimagining them in a more respectable context, it tapped into their cultural power to bring fear to an entirely new audience. Of course, the primary goal of Sleeping with the Enemy isn’t terrifying the audience, but it does pack a more spine-tingling punch than the average thriller potboiler.

The story the film does focus on telling is a simple one; that of a woman struggling to take her life back from the talons of a manipulative and wicked man. The opening sequence, which depicts her loveless marriage, is a harrowing ordeal and a distressingly realistic portrayal of domestic abuse, but it’s what follows that is even more heart-wrenching. Laura struggles to trust again, tentatively entering a relationship with her drama professor neighbor (both bear bafflingly curly manes of hair that I constantly worry will get stuck together like Velcro), but fearful of intimacy and the knowledge that at any moment her husband might find her. As a  character study of a damaged woman attempting to heal, it’s not bad, although it does shade into queasy Hallmark treacle at times.

The middle third is perhaps not quite as visceral or impactful as it could be and a late reveal is silliness of the highest order, but overall, Sleeping with the Enemy is a thrillingly functional paranoid drama. There’s a reason it isn’t remembered with the lurid fondness of a Basic Instinct or Fatal Attraction, but it’s definitely an unpolished gem that’s worth a second look.