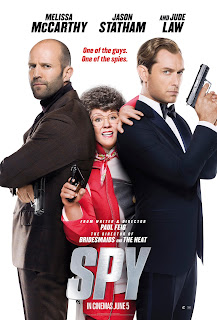 Is it just me, or are Apatow comedies better when he’s not actually directing them? So far, I’d say the best to come from his stable are pretty unequivocally Paul Feig’s Bridesmaids and Nick Stoller’s Neighbors. Feig’s most recent bout in the ring isn’t exactly proving me wrong. Spy, his newest Melissa McCarthy vehicle, might just be the apotheosis of everything that that collective has been working toward: a brash, fearless, and fun genre exercise that blows everything that came before it right on out of the water. 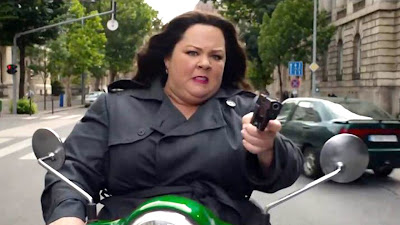 Hell, it even blows itself out of the water.

Spy tells the story of CIA agent Susan Cooper (Melissa McCarthy), a timid woman who squanders her potential by working behind a desk, providing navigation for the inexplicably British Agent Bradley Fine (Jude Law), on whom she has a crush the size of a moon-destroying rocket. When one of his missions is compromised by the wicked heiress Reina (Rose Byrne), the CIA discovers that she knows the identities of all their active agents. In desperation, they send Susan after her, because she’s unrecognizable.

Thus begins a heartwarming tale of a mousy pushover stepping into the spotlight to become the butt-kicking superspy she always knew she could be. Well, in time. First she must fight her way through a series of wacky hijinks, aided by her coworker and friend Nancy (Miranda Hart). 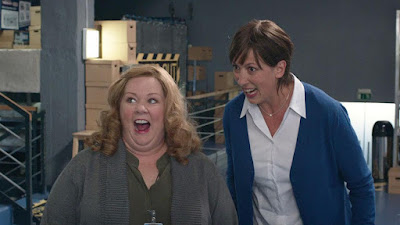 Who I recognized from this awesome Mamma Mia! parody because I’m cultured.

Spy is, to put it lightly, an experience. It’s a female-led Austin Powers that - like Bridesmaids – isn’t FOR women. It’s WITH women for EVERYONE. And there really is something for everybody here. The raunchy comedy is spliced onto a legitimate action thriller that devotes as much attention to high octane spy escapades as it does to belly laughs.

While we’re on the subject of bellies, I really have to commend this film for not using McCarthy’s weight as a punchline. She’s a remarkably talented comic actress, but previous vehicles for her like the abhorrent Identity Thief center her character and humor entirely around her weight It’s crass, it’s unfair, and it’s dreadfully boring.

In Spy, her character has her fair share of flaws, but her size isn’t even a factor in her initial lack of appeal. In fact, the only joke that could really be considered a fat joke is just a pratfall. The truly unfortunate thing is that the trailers latched onto that scene like it was a slice of toast bearing the face of the Virgin Mary, hopelessly misrepresenting the film and causing me to skip it in theaters. Hence, this egregiously late review.

But I have since rectified my mistake, and I am here to tell you that, if you haven’t seen Spy, you’re missing out. Humor is entirely subjective, of course, but the fact that both Sergio and I found Spy to be the funniest movie of the year should tell you something. We’re hardly ever on the same page. 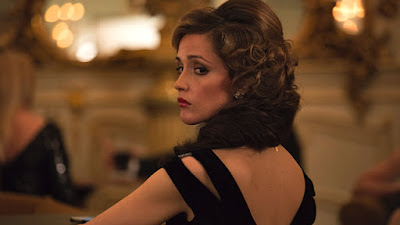 Hell, that guy loves Winter’s Bone, which is as far from being a Brennan movie as a Rob Zombie reboot of Grease.

Spy’s humor comes from a variety of places: spy parody, McCarthy improve, Apatowian gross-out antics, and secondhand embarrassment all jockey for position. But in addition to McCarthy, who is a reliably bankable humorist, big chuckles come form two unexpected performers. First of all, Rose Byrne  - who is already well on her way to comic superstardom thanks to her being the single best element of Neighbors – is incontestably hilarious as the spoiled and evil antagonist with a heart of gold leaf. Her performance is so consistently out of left field that she always keeps you on your toes.

But the true lightning in a bottle standout of Spy is one Jason Statham, as McCarthy’s careless and vain coworker who tails her incognito as she attempts to covertly carry out her mission. He distills the essence of every Jason Statham character into one stiletto sharp caricature, blowing his typical badass bravado tremendously out of proportion. It’s a genius portrayal, a character with infinite confidence in his own abilities without actually being any help at all. He is not always served well by the Apatow-standard editing, which just lets him keep going and neglects to trim his one-liners to an appropriate amount. I call this the “quip tsunami” technique, and while hilarious at time, it’s less controlled here than in similar films. Nevertheless, Statham is a sparkling presence in an already uncontrollably fun movie.

The best thing about Spy is that, even if you utterly detest the comedy, you can tune it out and still have a one hundred percent functional spy picture. The action is ludicrous and over-the-top, but it’s not like you’ll get anything different if you shell out for Spectre. And this way you don’t have to pretend to care about Bond’s awkward, fumbling chemistry with his wallpaper love interest. It’s a win-win! Spy’s action benefits from a truly staggering budget for a comedy, which allows it to indulge in just as much globetrotting splendor as the best of the best.

With the humor of a Bridesmaids and the absurd, slightly inappropriate swashbuckling of an Octopussy, Spy is just plain a fun time at the movies. The best of the constantly improving McCarthy-Feig pictures, Spy actually gives me high hopes for the new Ghostbusters. Sleuth it out of Redbox and snag yourself a good time!