We Know That It's Probably Magic 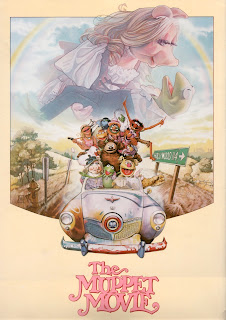 I just made the best decision of my life. Because I’m a huge fan of the Muppets and their new TV show on ABC is just unlawfully good, I decided to drag myself and Sergio through a marathon of their 8 theatrical features, only three of which I have previously seen (and just one of which – Muppets Most Wanted – I have previously reviewed).

Jim Henson’s Muppets have withstood the test of time with grace and flair, bringing their enterprisingly meta comedy to the masses for over half a century. Although The Muppet Movie is not where they got their start (they debuted on Sam and Friends in the ancient year of 1955 and were already three seasons deep in The Muppet Show by the time the movie was released in 1979 – totally incidentally, the same year that Mad Max injected fuel into the engine of action cinema), it’s nevertheless a great place to start: their origin story. It’s like Texas Chainsaw Massacre: The Beginning, but only slightly less violent.

The Muppet Movie opens on the World Wide Studios lot, where the Muppets (including Kermit’s terrifyingly waifish nephew) have gathered for a screening of their first film, depicting how the felt-covered crew came into being.

The film rolls and we’re immediately plunged into the single best scene in the history of children’s entertainment: Kermit the Frog (Jim Henson) sits on a log, strumming a banjo and wistfully crooning the Willliams & Ascher tune “Rainbow Connection,” the ethereal paean to following your dreams that has landed at number 74 on AFI’s 100 Best Movie Songs list, been covered dozens of times by artists including The Carpenters, Weezer, Justin Timberlake, and Kenny Loggins, and caused more teary eyes than a century’s worth of animal dander. “Rainbow Connection” is a goddamn perfect song. This film was, is, and always will be “Rainbow Connection,” and thus can be forgiven if nothing to follow ever adequately reaches those heady heights.

Following his sojourn into unadulterated joy, Kermit meets Bernie (Dom DeLuise), a Hollywood agent who tells him of an upcoming audition for frogs, wanting the opportunity to make millions of people happy, he takes a trip from the swamp to sunny California, making friends along the way and taking them with him. These fine furry folks include failed comedian Fozzie Bear (Frank Oz), traveling plumber Gonzo (Dave Goelz), down-home beauty queen miss Piggy (Frank Oz), and the band Electric Mayhem, of whom the only one that matters is Animal (Frank Oz, who I hope got a dozen different paychecks for this).

There’s a lot of hippy-ish free love ride sharing going on, but the gang is pursued by the very un-New Age Doc Hopper (Charles Durning), a fried frog legs magnate who will stop at nothing to make Kermit the spokesfrog for his restaurant chain, even if I means killing and stuffing him. 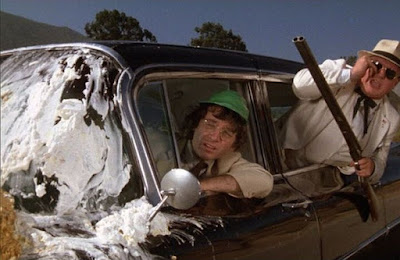 Now, this is a movie from the 70’s, and it more than betrays its vintage. Of the dozen or so cameos that pack this film, today’s kids would only recognize two – Steve Martin and Big Bird. And Sergio and I hardly fared much better, though we at least had heard of everybody featured. Between that and the older, more threadbare puppet designs, The Muppet Movie doesn’t quite bridge the gap to the modern age, though it really doesn’t need to with its universal themes and cheery humor.

The real trouble with The Muppet Movie is that it never truly tells a cohesive story. It’s more a loose string of vignettes with the same broad theme, a problem endemic to many road trip movies (except, oddly, Bride of Chucky). There are some hazardously dull patches on the rocky road from point A to point B, especially any scene featuring Electric Mayhem, who I must admit I’ve never cared for except as an Animal delivery system. This story structure also allows some self-indulgent breaks from tone, like a bizarre and pointless Western interlude (which is almost made up for by the hyperbolically adorable sight of Kermit in spurs and a ten-gallon hat).

The soundtrack has its equal set of rough patches. I know that comparing any song to “Rainbow Connection” is like comparing a glass of water to the Pacific Ocean, but Piggy’s “Never Before, Never Again” is still a bit wan, pepped up only by Frank Oz’s gonzo performance (pun not intended, with all due respect to Dave Goelz). And I think if I badmouth Electric Mayhem one more time, I’ll be run off this blog with torches and pitchforks, so I’ll just say that I wish they’d ended along with the 70’s. 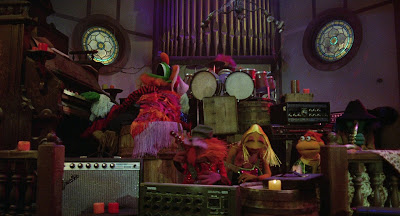 Unfortunately, puppets hardly ever have contract disputes, so we’re stuck with ‘em.

But for all that The Muppet Movie isn’t the greatest film ever made, it’s still an unimpeachably fun motion picture. While the broad-as-a-barn vaudeville comedy stylings might not be everybody’s cup of tea, the humor is so sweet and gentle that it’s impossible to dislike. Plus, several of the cameo performers are downright uproarious, including Mel Brooks in an explosive turn as a sublimely evil German doctor and Steve Martin as an uncouth waiter. Any time they’re pulling their absurdist antics onscreen, the only way you’ll stop laughing is if your lungs fall out.

The real core of The Muppet Movie is its earnest desire for you to have a good time, a goal which it indubitably accomplishes. It has no higher purpose than creating smiles, the simple compositions and unchallenging plot line serving only as a means to an end. But, oh, what an end. Jim Henson’s Muppets have always had an uncanny level of emotional life thanks to their mind-bogglingly terrific puppeteers, but the earnest and sentimental approach to storytelling here is uncannily effective.

From the heartstring thresher that is “Rainbow Connection” to the open-faced, generous enthusiasm with which Kermit chases his Hollywood dream, The Muppet Movie very frequently taps directly into the human soul. Perhaps no scene is more potently sincere than Gonzo’s solo song “I’m Going to Go Back There Someday,” a piece that is literally about him wanting to be a stuntman but rings with percussive emotion about optimism, passion, and reaching for he stars. I’d say it’s inhumanly powerful, and I’d be right. It’s muppetly powerful. That unfettered sappiness which never ever feels dishonest is the reason that this film is a classic. 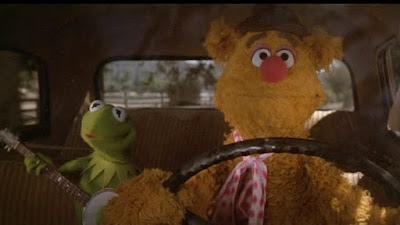 It never hurts to feel like a kid again.

Soon, just like the film’s jaunty recurring theme, we’ll be “Moving Right Along” to later, occasionally better Muppet pictures. But let us never forget the sacrosanct pleasure of watching these good friends get together, even if there were some bumps in the road. 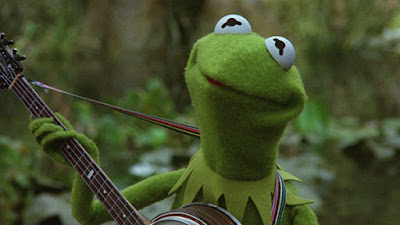 Kermit is usually the straight man (well, straight frog) among his zany friends: but this movie is his and his alone. His earnest desire to make people happy drives this occasionally uneven film with all the Jim Henson sentimentalism he can muster.