As we continue to clear out the wreckage of Halloween, let’s take a couple quick jaunts into the depths of Hell and see what we can dredge up.

Drag Me to Hell 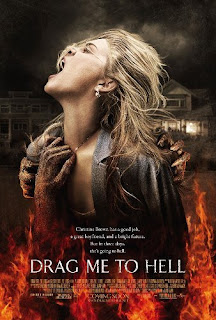 An enterprising young banker denies a gypsy woman her loan and is cursed to be tortured by the Lamia then dragged to hell.

Like most horror icons, Sam Raimi has done all in his power to not actually direct horror movies. After helming the unforgettable Evil Dead trilogy, he moved on to projects like the Kevin Costner baseball treacle For the Love of the Game or the Spider-Man trilogy, all three of which are superhero flicks, but one of which is inexplicably a musical. After years and years of this nonsense, Raimi finally stepped back into the ring with Drag Me to Hell, and the really surprising thing is that it’s freaking awesome.

It pretty strictly adheres to the Evil Dead formula of invoking an ancient evil, being tormented in grotesquely hilarious ways, and then facing an unrelenting denouement, but from the perspective of an older and wiser director. He’s no longer 21 years old, and while in his maturity he has somewhat lost the borderline callous disregard for traditional film language that made his Evil Dead so uncannily kinetic, he has gained a sharper talent for embedding story and character in among his zany showboating.

These characters re still pretty rudimentary, but compared to Ash Williams and his meatbag friends, they’re Chaucer. Alison Lohman’s Christine is set up with a whirlwind flurry in a series of swiftly efficient scenes that paint her personality in bright splashes like Jackson Pollock canvas: she’s timid, eager for promotion, afraid of being branded a country hick, and ashamed of being overweight in her younger years. These qualities come into play again and again throughout the film, so they’re broad but hardly the pointless shading of 80’s cannon fodder that just needs to be differentiated from the next blonde over before she can be exploded into goo.

The dominoes are hardly even in position before the first one topples. Christine is suddenly plunged into an ancient nightmare and for the duration of the first act, it’s legitimately scary. Classic Sam Raimi touches electrify the proceedings (giddily twirling camera, looming silhouettes on faces, you know, the usual) and Drag Me to Hell goes through the motions of an utterly effective horror flick.

That is, until about he midway point. A talking goat and a necrotic mazurka smash the film off its hinges, sending it flying into a classic Raimi fever dream. The subtle and chilling horror jumps screeching into your face, putting Lohman through the Bruce Campbell ringer, smearing her with filth, gore, and excrement, beating her to a pulp with a gypsy corpse, and just generally making a mockery of her attempts at normalcy. It’s buoyantly silly, with enough references to Evil Dead II to be a hearty nod and not a brazen rip-off.

An exquisite blend of gushing camp and bleak fearlessness (they kill a child, for goodness sake), Drag Me to Hell isn’t Raimi’s best film, but it’s certainly a dazzling return to form. Between this and the pilot episode of Ash vs. Evil Dead, I’d say it’s time for the man to ditch the producing game and get back on the horse. And yes, we’re pretending that Oz the Great and Powerful never happened. 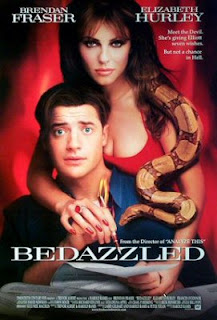 An unloved loser sells his soul to the Devil in exchange for wishes, which invariably go awry.

“Starring Elizabeth Hurley and Brendan Fraser.” Could a phrase possibly be more early 2000’s? How about “comedy where a lead actor performs caricatures in a variety of zany, vaguely racist costumes?” Bedazzled, a remake of the 1967 movies of the same name, is an effortful, ridiculous comedy that reeks of flop sweat. As Brendan Fraser attempts to channel his inner Jim Carrey, jokes are flung out into the audience like wet fish. They can be funny in a nostalgic “the new millennium was so stupid” kind of way, but that’s the only thing that has allowed itself to hold any vestige of esteem past its demographic’s infancy.

OK, maybe I’m being a little harsh. The opening credits are genuinely fantastic. I really mean that. And there is good in Bedazzled, it’s just sandwiched between a whole lot of “wacky” artifice, Sometimes the film stumbles into thickets of such sublime stupidity, that you let your guard down and it can actually tickle you. You absolutely, positively must be in the right sophomore Stifler mood to watch this movie, but it’s entirely possible to enjoy it all the way through.

The biggest setback to the comedy is the smokin’ hot Elizabeth Hurley as the Devil, who gets the film’s funniest lines but delivers them with the nuance and vivacity of a mailbox. I bet she and Rachel Ward are having crumpets in some fantasy realm beyond our understanding, because they share the same vacant, pouty stare. The lines are humorous enough a la carte that they still work, but Hurley does everything in her power to vacuum every last crumb of comedy from them. She is the knife in Bedazzled’s back if you’re not attracted to women, because otherwise she has absolutely zilch to offer.

It’s not like the movie needed help sucking the air out of itself, what with its preponderance of offensive stereotypes. In one fell swoop, Bedazzled knocks down Latinos, gays, and wise old black men. In the fantasy where Fraser becomes a basketball player, I’m legitimately surprised they didn’t put him in blackface. I’m grateful they showed a modicum of restraint, although the hulking albino beanpole he becomes is pretty unsettling just the same. I forgive that scene’s woeful makeup for providing a pretty hilarious lampoon of less-than-erudite players in post-game interviews.

But Bedazzled isn’t finished with us quite yet. We still need to talk about the way it treats the women. Oh, the women! There are brief specters of progressive values here (merely being rich and powerful can’t win someone’s heart, etc.) but the love interest here is never treated as anything other than a vapid, mercurial prize to be won. [SPOILERS] Even once Fraser realizes that he just wants her to be happy and accepts her rejection, he is rewarded for his morality with an exact twin of her. I hate to get too political on movies that are irrevocably from a certain time period, but it’s not exactly on message.

So, here we are. Bedazzled is palatable if and only if you can manage to completely unscrew your brain. It’s problematic and its narrative is nothing more than a sequence of sketches, but if you’re in the mood for a juvenile time capsule flick, look no further.