Let’s take a brief break from the horrors of Halloween to kick back, relax, and laugh before diving straight into more killer classics. Here’s a couple mini reviews of flicks that prove I’m not demented! Maybe.

The Naked Gun: From the Files of Police Squad! 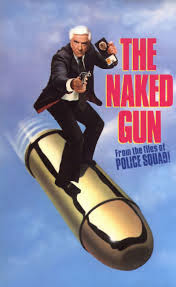 A bumbling member of Police Squad! uncovers a lot to assassinate the visiting Queen Elizabeth.

I live for David Zucker comedies. Airplane! Is my favorite non-horror movie of all time, and his absurdist stylings just tickle me wherever I can find them. That said, The Naked Gun is not my favorite entry in his sprawling canon of spoof movies, though it is assuredly very good. My current working theory is that, as a movie version of the pre-existing Zucker-Abrahams-Zucker series Police Squad!, the writers were a smidge too familiar with the material to give it that extra sparkle.

However, please remember that my complaining is completely relative. The Naked Gun is still a damn sight better than most of the mangy pups the studios call comedies nowadays. It’s a relentlessly upbeat marriage of cop movie tropes and zany slapstick, a subversive and ribald genre picture that clearly adores the films it’s skewering. Perhaps my somewhat muted appreciation for this film comes from the intoxicatingly high level of that Stooge-esque slapstick, a form of comedy that fails to completely resonate with me. But the fact remains that it’s being perpetrated by experts of the craft, and I have nothing but respect for that.

Plus, it’s not like The Naked Gun doesn’t have a dozen other outlets for humor. A ZAZ picture is like an immense pipe organ. The air pressure that builds up can be releases through a huge variety of valves and avenues, but they still coordinate to make beautiful music. Or at least “Yakety Sax.” Among the irresistible subversions of generic clichés (even the partner cop’s own wife calls him “Nordberg”) and general buffoonery (an attempt to kick down a door sends a cop’s leg smashing ineffectively through the paneling) are subtle background gags (a sign on a building that says merely “The Police Station”), sly double entendres, choice celebrity cameos, and just plain inimitable line readings (Ted’s forlorn “Why?” after being hit with a tranquilizer dart).

So, yeah. It’s funny. And it wouldn’t be half as funny as it is without the grave, deadly earnest Leslie Nielsen at the helm. The key to terrific comedy is characters who don’t realize that they’re being funny, and Nielsen’s background in self-serious B-movies (including our very own Prom Night – we can’t escape the Halloween season) perfectly matches him to this kind of material.

Nielsen approaches each and every scene with such confidence and gravitas that it’s incessantly surprising when it all falls to pieces. His performance also keeps the central plot in focus, preventing the attention deficit that oh so frequently scuttles similar parody movies. Or, you know, unfunny wrecks like Meet the Spartans or Vampires Suck that we all thought were the pinnacle of hilarity back in middle school.

The only place where the movie falls truly flat is the baseball stadium finale, which has too many narrative switchbacks to properly follow the plot and acts as a showcase for the film’s least effective gags. At this level, “least effective” would still be funny in any other movie, but here they’re just too typical to match the dizzy heights the film has set for itself.

The bottom line is that The Naked Gun is funny 99 percent of the time. It might not always be funny in ways that I personally appreciate, but that doesn’t prevent it from worthy entry into the pantheon of spoof classics. Surely you can’t object to that. 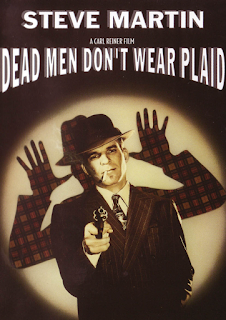 Rigby Reardon is a private eye investigating the possible murder of the father of a local femme fatale.

Dead Men Don’t Wear Plaid is one of my all time favorites comedies. Not only is it a ribald send-up of classic black and white detective flicks, it pits Steve Martin’s Reardon against character from real film noirs, expertly cutting him into footage from scores of old films. It’s not often that you find a spoof comedy starring Barbara Stanwyck, Ray Milland, Ava Gardner, Burt Lancaster, Humphrey Bogart, Cary Grant, Ingrid Bergman, Veronica Lake, Bette Davis, Lana Turner, James Cagney, Joan Crawford, and Vincent Price. It’s true they’re not exactly in on the joke, but that’s a killer cast, to say the least.

Though some of the continuity editing is a little shaggy DMDWP’s construction is awe-inspiringly tight, utilizing matching sets, clever dialogue cuts, and blended color schemes to create one continuous, totally viable film. And although some of the comedy does come from structural humor (non sequiturs present in the borrowed dialogue, absurd match cuts), the best thing about it is that it’s genuinely funny in its own right. The spliced-in footage might be a gimmick, but it certainly isn’t what keeps the movie afloat.

Just as film noir exists in a heightened reality where everything dark and grimy about the human condition is amplified tenfold, DMDWP subverts that charged atmosphere, using it as a springboard into the heady heights of ludicrous absurdity. The movie bends the rules of reality, making every act – from brewing a pot of java to flirting with a woman to talking about cleaning women – a bold triumph of ecstatic silliness.

And my oh my is it startlingly lewd. Maybe some of the raunchier jokes just seem amplified by the film’s apparent vintage, but either way they work like gangbusters. Just like Leslie Nielsen, Steve Martin’s über-serious work here informs the hyperbolic parody, though he’s certainly a touch more aware of himself as evidence by his mugging for the camera. Luckily he finds a counterbalance in Rachel Ward (of Night School – thank you, Halloween spirit), whose every word drips with sheer, oblivious sincerity. Perhaps that might be all she’s capable of, but boy does it every work wonders in this particular context.

The humor of DMDWP is sterling and pretty much untouchable, but the film’s not entirely flawless. In the second act, it gets a little too caught up in its own mystery. The joking abates for brief periods while it delicately lays out its oddly complex system of clues and suspects like they’re fragile china on a tea tray. Because of the sheer mass of threads and characters plucked from other movies, the storyline never quite makes sense, and the intricate algorithm required to keep them glued together only mucks up the narrative works something fierce.

The film settles down once it simplifies itself again in the finale, but for a while, it’s merely a string of funny gags dangling precariously from a single loose plot thread. But damn are those gags entertaining as hell. Dead Men Don’t Wear Plaid is an utterly singular comedy that, if you haven’t seen it, I’m marvelously proud to have introduced you to. Go to it now. I want to kiss this movie with every lip on my face.