It's Hard Out Here For A Pimp

Sharp-eyed readers may have noticed some of the movie posters schizophrenically flickering along the "Coming Soon" section of my blog's sidebar. Rest assured, everything truly is coming soon. "Soon" is an exquisitely relative term chosen for its very nebulousness. But over this summer, between work, the Scream 101 podcast (which I am very proud of), and the inordinate amount of movies that I have been watching, it's just been a struggle to prioritize which reviews to get out first according to the system of extremely complex algorithms I have set in place for myself.

My accountants are hard at work figuring things out and you can prepare for an onslaught of reviews like you've never witnessed before, but in the meantime, please enjoy these two mini-reviews for films that I watched recently, but about which I had only relatively minor thoughts to share. 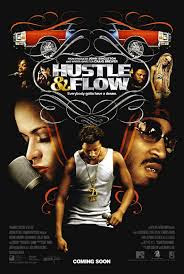 A small-town pimp thinks he has what it takes to make it in the hip hop business.

Some movies with that exact plot line are inspiring. Some are treacly and shrill. Most are painfully generic. But a very special few anchor themselves around a protagonist so vehemently, ho-slappingly unlikeable that you actively root against him. Perhaps this isn’t what Hustle & Flow was going for, but that’s at least what makes it interesting.

“Interesting” does not always mean “good,” but Hustle & Flow flirts with the combination when it’s not being nauseatingly misogynistic. Which is most of the time. You see, Mr. Pimp, played by the terrifyingly good Terrence Howard, lives with three of his hos, one of whom is pregnant, one of whom he kicks out on the street with her baby, and all of whom he menaces with precise regularity like the world’s most evil cuckoo clock. And then he turns around and records songs like “It’s Hard Out Here for a Pimp” or “Whoop That Trick” about how these skanks need to understand that he’s actually a super sensitive guy who’s beating them for their own good. As he performs a job that they could easily do themselves. If they even wanted to. Which they don’t.

It’s tough to process the urge to strangle your protagonist with 8-track tape when you’re not watching a horror movie or some other genre actively meant to shock or horrify you. The really disheartening thing about Hustle & Flow is that it doesn’t seem to notice any of this. There’s an awe-inspiring level of cognitive dissonance going on between the Take the Lead/Freedom Writers story that it imagines it’s telling and the GTA XXI: Harlem Shake amorality that actually plays out onscreen. In the film’s most triumphant, romantic moment, a kiss between Howard and Taraji P. Henson, it’s hard not to think, “What, she suddenly forgot that the only reason he’s not forcing her to sleep with a stranger is that because she’s carrying another stranger’s baby so she’s damaged goods?” It’s not exactly Sleepless in Seattle.

As a character study, there is a mild degree of nuance, but the film is far more interested in exploring how the man’s ambitions and talent have led him to believe that he deserves instant success and the consequences of his realization that that’s not exactly how it works. The film’s acknowledgement of reality – that just being a good rapper is only a start to getting big, that there’s a lot of hard, thankless work involved, is its biggest strength.

Its second biggest strength is its setting, which effortlessly evokes the town’s poverty in simple, sad, beautiful details: a splash of garish neon in a rain puddle, water slowly dripping into buckets through the leaky roof of a strip club, and the ever-present, grotesquely un-Hollywood sheen of sweat that glistens on every performer, a la The Fighter or Do the Right Thing. And Howard is admittedly terrific, bolstered by strong, committed performances by his side-hos, Taryn Manning and Taraji P. Henson. But damn, is this film unpleasant to watch. 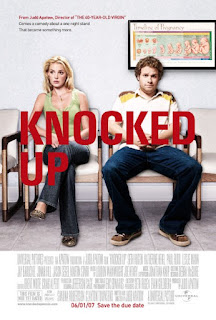 An entertainment news presenter accidentally finds herself impregnated by an unemployed pothead.

OK, obviously I took a lot of creative license with that description, but surely it hasn’t escaped the notice that in Judd Apatow’s parables of schlubby man-children learning about the splendors of adulthood and heteronormative pair-bonding, the women are vehicles for this transition more often than they are thinking, breathing, flesh-and-blood human beings. That said, Knocked Up is one of his better efforts, thought I believe I can be forgiven for slightly preferring Forgetting Sarah Marshall.

First and foremost, Knocked Up is funny. That’s the important thing, I suppose. However, much like Trainwreck (review pending) and many other flicks in his filmography, he film is funniest when Apatow throws open the floodgates on his massive stable of comic actors, allowing thrilling fringe performances from Jason Segel, Kristen Wiig, Ken Jeong, Adam Scott, Bill Hader, Charlyne Yi, Craig Robinson, and Alan Tudyk to wring laughs from the sidelines. In the midst of such a squall, Heigl and Rogen hardly make any impression at all, finding themselves likewise outshone by co-leads Leslie Mann and Paul Rudd, as the squabbling married couple providing a benchmark for how our unhappy pair shouldn’t strive to be.

In fact, the strongest scenes with any of the leads are when they buddy off into same-sex pairs: Mann with Heigl and Rudd with Rogen. It hobbles this romantic comedy somewhat that its romantic pair is by leaps and bounds its weakest link, also stunting the flow of several of its major story arcs, but there is enough genuinely good material at work here to buoy the movie past any obstacle.

At the end of the day, it’s quippy, poppy, and a lot of fun, and I can’t begrudge it of that. It doesn’t leave me with a strong sense that I truly understand the mechanics of this couple or the reason they decided to keep this baby and raise it together, but damn it, it’s a good enough time that it’s hard to care too much. Nothing a nice, even slicing of fifteen minutes couldn’t fix. Even in the early years, Apatow never knew how to edit himself.