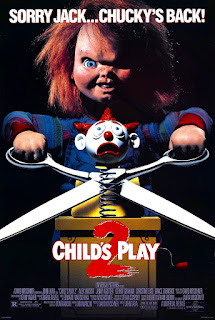 Horror sequels get a bad rap. They may be tawdry, craven, or eccentric, but that’s hardly a reason to love them any less. And out of the crop of sequels in a franchise (there’s almost always a franchise, if the first film earned a dime – sometimes even if it didn’t), part twos tend to be the most interesting. A part two is the horror sequel in its purest, most unrefined state. The original actors might still be hanging around (if they haven’t gotten famous, left Hollywood, or found religion) to make return appearances, there’s plenty of money in the coffer, and there’s almost total creative freedom – with only one prior, it’s harder to pick out a pattern to follow.

A first sequel can decide the course of an entire franchise. Friday the 13th Part 2 made the drowned child Jason Voorhees the villain, a putrescently awful idea that went on to make untold millions. Halloween II guaranteed that any attempt to anthologize the franchise without its trademark Boogeyman would be a non-starter. Saw II began the tradition of Jigsaw expanding his torture empire like a less morally bankrupt McDonald’s (zing!), Hatchet II introduced the use of cameras that cost more than five dollars (double zing!), and A Nightmare on Elm Street 2: Freddy’s Revenge… Well, people like to pretend that that one never happened. 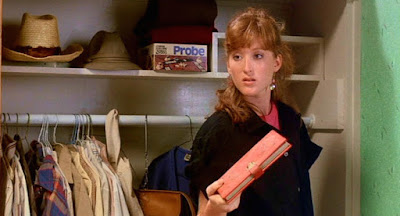 Probe won me a point in horror trivia one month, though. #neverforget

So when it came time for Child’s Play to wrangle itself a part two (two years after its release – a little late for an 80’s horror sequel but these were the waning years of the age of slasher decadence), there was a whole horizon of hope and wonder spread in front of it. What Child’s Play captain Don Mancini (who has penned the script for every single film in the franchise and directed the most recent two films) elected to do was set his killer doll slowly down the path set by Freddy Krueger: from genuine menace to quipping prankster. Because the initial pedestal he had to fall from wasn’t quite so high, this transition was much smoother, but that’s a story for another time. For now, what we’re faced with is the new Chucky’s cocoon, a still horrific tale that’s certainly more vulgar and crass than its predecessor but equally more focused and thrilling.

In Child’s Play 2, young Andy Barclay (Alex Vincent) has been committed to the foster system following the institutionalization of his mother. The business with the killer doll Chucky (Brad Dourif) – who was possessed with the soul of the Lakeshore Strangler Charles Lee Ray – has been written off as a flight of childish fancy, nevermind the four corpses left in his wake. Andy has been taken in by Joanne (Jenny Agutter of An American Werewolf in London) and Phil Simpson (Gerrit Graham) as well as their teen foster daughter Kyle (Christine Elise), winner of this film’s Spirit of the 90’s ribbon with her leather hat thick gold chain, and cherry red lippy.

When executives of the Play Pals corporations rebuild the Chucky doll to dispel those hurtful rumors about his nasty habit of attempting to dismember loyal customers, things go about as well as you might expect. Chucky discovers Andy’s whereabouts and takes the place of Tommy – the Good Guy doll Andy has been using to get over his trauma – to infiltrate the house and find a quiet moment to play a round or two of Hide the Soul. 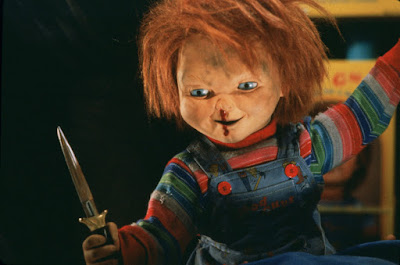 I mean, at least it’s better than Monopoly.

The most important topic when discussing Child’s Play 2 (as it is I suppose, with any of its sequels) is the film’s treatment of Chucky. A serial killing doll is a tough character to pull off at the best of times (why don’t people just set up a child gate or something? He’s two freaking feet tall!), and the turning point of the Chucky films was when they embraced their inherent camp value. However, this film struck a curiously perfect alchemical balance. Now that viewers already knew the extent of Chucky’s supernatural prowess thanks to the mostly played-straight Child’s Play, the doll was free to interact openly with his environment from square one. He still lurked in the shadows whens talking his prey, but this Chucky is a more mobile, active man about town.

Many horror enthusiasts would argue that bringing the villain out into the open dampens the cerebral chill of the unknown, that imagination is always worse than what we can see. They’re partially right. And in scenes like, say, Chucky spanking a teacher with a yardstick, it’s a little harder to take him seriously. But this film’s forays into camp territory are relatively infrequent, and the increased face time with Chucky also maximizes exposure to Brad Dourif’s paint-peeling performance of raw, unfettered malice. Chucky’s slightly improved animation effects also serve to make him a more credible menace, and when that doll roars with anger it will electrify your nerve endings like taking a dip with a toaster. 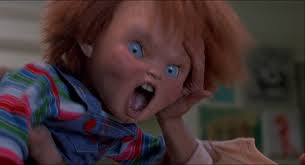 While Child’s Play 2 may lack Tom Holland’s flair for stacking a scene with gag after gag, it’s also the film in the franchise that most frequently and consistently wrings tension out of its scenario, losing the muddy mystery elements that bogged down the original script like a pair of concrete booties. Whether it’s a switcheroo kill where a weapon turns out to be harmless before Chucky strikes for real, the unendurably slow unveiling of Tommy’s deposed corpse (which was buried under the swing and gets revealed a little more with each kick), or just the world’s creepiest basement, this is an astonishingly well put-together work of early 90’s horror cinema. Mind you, that company includes Leprechaun, Dr. Giggles, and The Ice Cream Man, but I’m not kidding around here. This movie’s got legs.

The script also serves the tone well by consolidating the horror around a single-family home rather than a gritty urban crimescape. It allows for more interpersonal dynamics to flourish as the plot thickens (dad thinks Andy’s crazy and wants to return him like he’s a faulty vacuum, mom is struggling with the fact that she’s barren, etc.), and Andy and Kyle develop a very genuine sibling bond that benefits the emotional impact enormously. Kyle also provides the franchise with its first real crack at a bona fide Final Girl, rising to the challenge with vim, vigor, and punk rock attitude.

When the finale rolls around, just Kyle, Andy, Chucky, and an endless Mary Poppins grab bag of lovely, gooey special effects, it’s tremendously difficult not to have fallen head over heels for Child’s Play 2. Chucky has found his way six feet under once more (this guy has more lives than a cat, and they’re all shockingly gory considering that his only health care option is plastic surgery), but his brief new lease on life has reminded us that yes, killer dolls can be scary, yes, sequels can be great, and no, they don’t have to win Oscars to prove it

Child’s Play 2 isn’t the best film to ever happen to me, far from it. But it’s delightfully easy to enjoy, and that’s an astonishingly rare occurrence in the dark and divisive forest of endless horror franchise. I cherish what I can, and Child’s Play 2 is like finding a forgotten reassure in a dusty old toy box, just begging to be played with all over again. 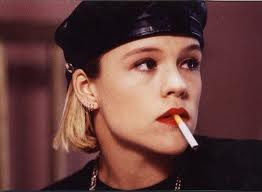