Census Bloodbath: Happy Birthday To Me

To listen to our podcast episode about this very film, please click here. 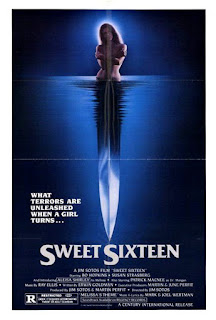 Today is the day that I turn 21 years old. Considering that I don’t drink, I decided that the next best thing to get me into that emotionally battered, physically nauseated state was a slasher movie from 1983. So here we are at Sweet 16, a flick filmed in the subgenre’s Golden Age year of 1981 but shelved as audience interest started to wane in the hopes that a resurgence was right around the corner.

It wasn’t. Sweet 16 was unceremoniously dumped into the world two years later, during perhaps the single worst year for slasher cinema until the genre well and truly keeled over and died in 1989. 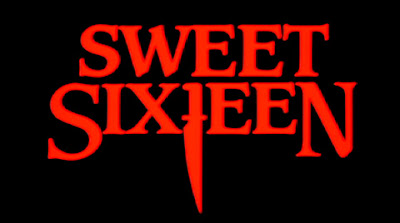 At least its lack of success spared us Sweet 17: B.Y.O.Body.

Sweet 16, for what it’s worth, at least has a unique premise for a meat and potatoes slasher. When pretty city girl Melissa (Aleisa Shirley)- and by pretty I mean literally caked in make-up every second of every day whether she’s sleeping, taking a shower, or even putting on make-up – moves into a small Texas town with her parents [the famed archaeologist Dr. John Morgan (Patrick Macnee) and Joanne (Susan Strasberg AKA the deliciously named Miss Viola Davis from another notable birthday slasher, 1981’s Bloody Birthday), who was born and bred in this town with her sister], all the boys are dying to go out with her. Or rather, they’re dying in general, because every boy she hooks up with ends up at the receiving end of a mad killer’s flashing blade before the night is through.

The local hicks blame the citizens of the nearby Indian reservation, namely the ancient Greyfeather (Henry Wilcoxon) and his grandson Jason longshadow (Don Shanks, who has the slashing distinction of portraying Michael Myers in Halloween 5 as well as appearing in Silent Night, Deadly Night and the Native American shaman slasher The Ghost Dance), leading to ugly racial tension about town that comes bubbling to a boil on the evening of Melissa’s sixteenth birthday party. 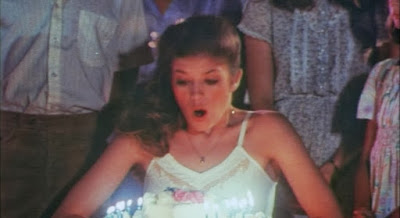 But what’s a birthday bash without a little lynching among friends?

Sweet 16 does not put its best foot forward. As a slasher, it is a daft, crummy mess and for the first twenty minutes or so it shows no indication that it might change its ways. Its muddy cinematography and cheap sets give way to even muddier night exteriors and even cheaper gore, which is invariably of the lazy Psycho-esque, “knife raise – scream – cut away” variety without a teaspoon of Hitchcock’s flair or talent. Or ability to see anything in the frame.

The truly upsetting thing is that early on, while reading a mystery novel, a character inquires how one might murder somebody with a rake, and then the film has the sheer foolhardy audacity to go ahead and kill exactly zero people with zero rakes. There’s not even a gardening scene. It just carries on with its dishwater knife twaddle like it didn’t clearly have an ace up its sleeve. 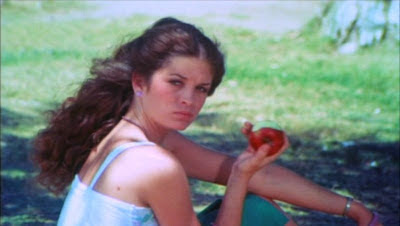 It’s a testament to my perseverance that I haven’t yet set my hair on fire during this project.

Luckily, Sweet 16 does have an ace up its sleeve, though it’s completely unrelated to the woebegone slasher twiddling its thumbs in the wings. That ace is Marci Burke (Dana Kimmell of Friday the 13th Part 3: 3D), the daughter of the local Sheriff (Bo Hopkins of Uncle Sam). She’s the reader of the aforementioned mystery novel and a Nancy Drew-ish curiosity-seeker who would much rather accompany her father on visits to murder sites than go to the mall or play with dolls. She’s spunky, funny, and the amount of rouge blast-sanded onto her cheeks to de-agify her is frankly riveting.

Unfortunately, as happens more often than not with the film, Sweet 16 fails to follow through on the promise of a fun slasher whodunit about a young woman solving the mystery of the murders in her town. But at the very least, Marci’s presence elevates it from crappy slasher to mildly diverting crappy slasher, and that’s a distinction I do not make lightly. And as it turns out, the mystery does have a half decent reveal, even though it’s completely obvious to anyone with a veteran’s ear for clunky dialogue.

Marci and that reveal are the only genuinely good things about the movie however, save a comic relief records clerk and a shot of a moonlit lake so beautifully composed, it makes up every scrap of publicity material for the film. Beyond that it’s just a jumble of half-digested ideas that fail to come to fruition: not enough boys die by Melissa’s seductions to give the mystery any juice, the racial undercurrent is only valuable as a red herring rather than any sort of cultural statement, and nobody gets killed with a freaking rake. 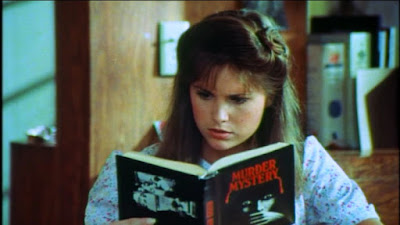 I’d even be happy with a Stooge-esque face smashing. Cut me some slack here.

I think one of the most essential rules of thumb when telling apart bad movies from the good ones (it’s harder than you think – they’re still making Transformers sequels) is to listen to the incidental music. That’s the music that plays in the non-monumental moments which aren’t as high profile as the main theme (which, incidentally, is a deliciously syrupy lyrical ballad entitled “Melissa” that calls to mind a caramelized Air Supply B-side). Let me give you an example – in a steamy love scene between Melissa and her new beau, Johnny, (Glenn Withrow), listen closely: What you hear is nothing. Complete, staticky silence.

That’s a telltale sign of a bad movie. You know, that and its dull plodding pacing, the outrageously uncharismatic kills, and utter lack of atmosphere. Sweet 16 couldn’t scare the pee out of a baby and that’s pretty much all those cherubic little bastards know how to do. It slightly attempts to make up for it deficiencies with a thin sheen of camp (especially a staccato shuttering zoom effect during its horror sequences that dates it more accurately than a calendar printed in the corner of the screen would), but it’s too little too late.

Sweet 16 isn’t the worst slasher one could find themselves chancing upon on a lonely video shelf, but it’s a film I can’t imagine ever revisiting of my own volition. If you’re a sick freak like me looking for some classic slicing and dicing action to gift yourself with on your birthday, you’re better off sticking with tried-and-true titles like Happy Birthday to Me or even the killer kid flick Bloody Birthday.

Killer: [Joanne/Trisha Morgan (Susan Strasberg)]
Final Girl: Marci Burke (Dana Kimmell)
Best Kill: Not applicable. I’m still fuming about the rake thing.
Sign of the Times: Nearly every item of clothing is a precise shade of Violet Beauregarde blue.
Scariest Moment: Melissa’s mother screams in fear that her dead father is coming to get her.
Weirdest Moment: The sheriff attempts to research on the microfiche while the lonely records clerk lavishly describes the steak dinner they could be eating right about now.
Champion Dialogue: “Why does he always laugh when I propose?”
Body Count: 6 [uniquely, all men, except for the killer.]