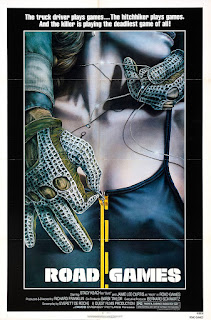 It’s a darn-tootin’ shame when I pop on one of my scheduled slasher flicks and it turns out to be a less-than exemplary purveyor of the form. No masked killer, no gore, no body count – it’s enough to make me worry whether or not I made a misstep in my research and accidentally spliced a romantic comedy into my calendar or something.

Road Games is one of those films. It’s about as far from a slasher as you can get while still maintaining the general formula and without, say, starring Meg Ryan. But it compounds the problem by being one of the most genuinely interesting flicks of the flock, much like the worrisomely categorized Motel Hell from way back yonder in 1980. Why oh why do the best movies in this project have to be the ones that turn themselves away from slasherdom? 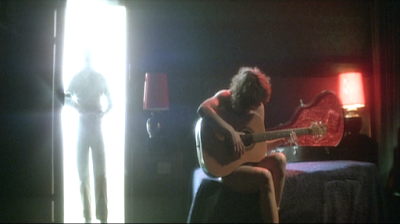 I mean, we all know the answer to that but I’m electing to ignore it.

Road Games tells the story of the lonesome trucker Patrick Quid (Stacy Keach), who drives he highways of Australia (oh yeah, did I mention that this flick is Australian? They had a surprising wealth of slasher output in the early 80’s) delivering meat, entertaining himself by playing the harmonica along with the radio, playing word games, imagining stories for the other drivers along the road, and engaging in comic banter with his dog, Boswell the Dingo. However, his games begin to go sour when he picks up a hitchhiker who spots a man digging a hole on the side of the road during a game of 20 Questions. The very same man who he happened to see at a motel last night with a beautiful young woman who has since gone missing. In the very same town where a maniac is on the loose cutting up beautiful young women.

Forget 20 Questions. Now Quid only has two: Is this man in the green van a murderer, and will he strike again? On the road he picks up a girl who he calls Hitch (Jamie Lee Curtis) and together they speculate on the identity of the man, chasing the van from truck stop to truck stop along the desolate outback en route to Perth. When Hitch herself is captured, Quid becomes the prime suspect and he finds himself on the run to catch the culprit, save Hitch’s life, and clear his name before the meat in the back thaws.

The meat delivery business is a very high steaks industry.

As you can probably surmise from my description, Road Games is a goofy road movie that slowly boils into a pulse-pounding crime thriller though it’s hardly a dyed-in-the-wool slasher. It’s terrifically strange, strangely terrific, and uniquely Australian, but it’s slasher elements don’t so much occur within the narrative as they do around it. The way that these elements are integrated into Quid’s restless jokes and games is superbly piano wire thrilling, but it’s a through-the-looking-glass entry in the genre to say the least.

The quickest description that comes to mind is that Road Games is like National Lampoon’s take on Duel. Its loony outback sense of humor seeps in through every pore, from the Mont Python-esque names given to its roadside ensemble (who Quid sees time and time again in different combinations at various rest stops along his journey – a clever, realistic touch) like Captain Careful or Sneezy Rider to the casual banter between Curtis and Keach regarding the murderer’s methods. It dances a little too close to the keen knife edge of wackiness in some slapstick scenes, but for the most part the atmosphere of effortless comedy propels the thriller elements straight to the core when they do arrive.

If any single person is responsible for the success of this highly unusual thematic pairing, it’s Stacy Keach. A large portion of Road Games is what can only be described as a one man show, and he has the ability to tune into the needs of each scene with the ease of a skilled chef knowing exactly how much spice to add without overpowering the soup. And naturally Jamie Lee Curtis is great too, but her hardly-a-cameo fifteen minute role is almost more thankless than her appearance as a headshot in Halloween 4. No, this is Keach’s vehicle and he drives it like a well-oiled machine. I’m genuinely dismayed that he didn’t’ work ore outside of the realm of comedy, because his Robin Williams meets Dennis Weaver mien is really working for me. 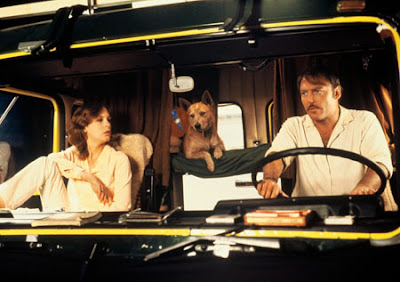 I’m glad I write about slashers. There’s no way a romantic comedy project would provide this many startling combinations of adjectives.

Of course, if Road Games were the glistening slice of pure cinema perfection that I’ve thus far made it out to be, we’d be talking about it in terms of awards buzz or in conversation with the rest of the crime thriller classics, instead of here in my lowly backlog of slasher reviews. Because no, it ain’t perfect. It’s ramshackle, rough around the edges, and unmistakably Less Than. Whatever it has, there’s never enough. There’s not enough gore, not enough Jamie Lee, not enough incident… It’s terrific at what it does, but it’s low budget and low key, content to stay in the slow lane and ruminate while chomping its cud. This is certainly not a detraction, but it prevents it from entering the upper echelon of true classic films.

That said, for what he had to work with, director Richard Franklin makes his film sing. Although the first two acts are aesthetically competent (smashing lonely wide shots and Duel-esque glimpses at the speedometer), in the third all hell breaks loose. Franklin opens Pandora’s box, unleashing every ounce of directorial talent at his disposal all at once in a glorious visual crescendo. Highway imagery (concrete, glass, and rushing metal) collides with organic matter in a sickeningly beautiful manner, most memorably in a shot where Quid’s eyes are drowned out by the glow of the van’s taillights, giving him demonically mechanical red eyes. His descent into madness is captured by the frenetic, magnetic imagery on display in hat is one of the most visually inventive sequences of the whole year 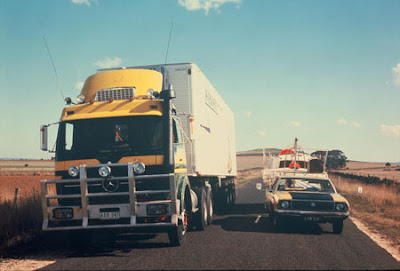 I liked it a lot, can you tell?

Really, all of these things merely endeavor to make Road Games a more confusing film. The more I fall in love with it, the stranger and more alienating it gets. And while I can admit that it’s far from a masterpiece, it holds an iron grip over my heart. Really, all I can say is that you won’t regret checking this one out for yourself. Don’t expect a slasher, don’t expect to be scared, don’t expect, well… anything. Just get ready for a wild and dusty ride.

Killer: Smith or Jones (Grant Page)
Final Girl: Hitch (Jamie Lee Curtis), sort of
Sign of the Times: People still hitchhiker instead of just using Uber.
Best Kill: Not really applicable, but the girl who died was playing guitar naked, if that’s of particular interest to you.
Scariest Moment: Quid keeps watch on who he thinks is the killer in the restroom while Hitch sneaks into his van.
Weirdest Moment: There’s a mural on a rest stop wall depicting soldiers massacring aborigines. Nobody seems to care.
Champion Dialogue: “No, it’s 'Q-U-I-D'. 'D' as in 'death to young girls'."
Body Count: 2


TL;DR: Road Games is a surreally strange, goofy thriller yet an utterly effective one.
Rating: 7/10
Word Count: 1279
Also sprach Brennan at 9:43 AM