How Do We Know She Is Alive? 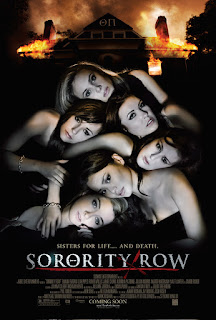 Slasher remakes are a much maligned bunch. When you earn the disrespect of fans of a genre as notoriously disreputable as the slasher movie, there's pretty much nowhere left to turn, artistically speaking. But still the wheels of the remake machine kept spinning, chewing up and spitting out properties like A Nightmare on Elm Street, Halloween, The Hitcher, and even poor April Fool's Day, polluting cinemas with its noxious cloud. Notable exceptions like Friday the 13th and The Texas Chainsaw Massacre would crop up time and again, mostly to be ignored by genre purists, but for the most part it's an anemic crop.

Then there’s Sorority Row. It’s not the best of the late 2000’s remakes (for my money that would be The Wizard of Gore, which converts H. G. Lewis’ unwatchable smear of a film into a twisted splatterpunk fairy tale), but it takes after its source material in the best possible way. You see, its forebear, 1983s The House on Sorority Row, is also a true gem among a diseased crop – the ebbing dregs of the first wave of slasher films. While the remake can hardly reach its giddy heights, it certainly manages to do it proud by at least being a successful conveyor of popcorn thrills, which is more than can be said for the bulk of its contemptible contemporaries. 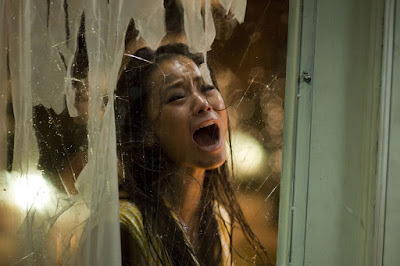 I still have stress dreams about the fact that I spent money n Rob Zombie’s Halloween II.

Sorority Row hews closer to the original’s plot than most in-name–only remakes, but it makes sure to leave plenty of room for the classic reboot standbys: actresses so sexy there’s a team of airbrushers listed in the credits, a script populated exclusively with outrageously privileged douchebags, and a half-dozen lines that name drop Facebook or whatever it is the kids are using to send nudes to each other these days.

When the Theta Pi sorority sisters, led by Queen Bee Jessica (Leah Pipes) – play a prank on a man wut done them wrong, convincing him that the “roofies” he gave to Megan (Audrina Patridge of the seminal drama The Hills) have killed her, the last thing they expect is for him to actually attempt to dismember her totally just kidding body. Now that they’ve actually got a corpse on their hands, the girls dump the body at the bottom of a mine shaft, against the protestations of goody goody Cassidy (Briana Evigan) and to the gentle whimperings of Ellie (Rumer Willis, who is an anthropomorphic spaghetti noodle.

At their end of the year graduation party, the girls find themselves being menaced and killed by somebody using Megan’s phone (which had kept its charge all this time – evidently she hadn’t switched to Apple yet). Is it their friend, back from the grave and ready to part? Is it the boy who killed her, finally having snapped? Or is it somebody else entirely, who found out about the cover-up and want these girls dead? Also Carrie Fisher plays the house mother, so that’s happening.

Help me, Xanax Extra Strength, you’re my only hope.

Perhaps the single best decision made during the production of Sorority Row was to keep it R-rated, especially considering that it meant pushing against the tide of the unforgivably successful PG-13 dribble of cinematic santorum masquerading as a remake of Prom Night. That rush of producer bravery gave the film a lot of freedom, and though it mostly restrains itself to typical slick, slack remake shenanigans, there are moments where it throws caution to the wind and embraces its exploitation pedigree.

There’s an almost shocking (for the time) amount of nudity in the film, rivaled only by Friday the 13th 2009’s gleeful excess, and while it can hardly be considered “edgy,” it at least comes close to considering attempting to be. There’s more nipples than a dinner rush at Applebee’s. less than a Grateful Dead concert, I’ll leave it at that. And while the gore is largely content to putter around offscreen, the kills themselves are creative and brutal. The quick flashes of implied violence have been done better (I mean, obviously), but the setpieces are clever, the results are messy, and the weapon of choice (a wickedly modified tire iron, - the tool used to kill Megan) is – in a word - radical. 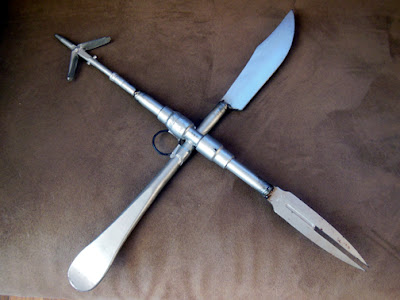 Sometimes a movie reviewer must toe the line between objective observer and twelve-year-old. “Knifey tire iron” is, evidently, my line.

I daresay I doubt that anybody will fall out of their chair in shock if I say that, in spite of its very real successes as a remake, Sorority Row is not in the least bit scary. If I did shock you, please accept my humblest apologies, send me the dry-cleaning bill for your soiled PJ pants, and feel free to follow this link to the index of my blog. I suggest you start at the A’s and work your way down. By the time you get to The Gallows at least, I think we’ll understand each other a bit better.

For the rest of you, suffice it to say that Sorority Row favors quippiness over frights and portentous whooshing transitions over legible cinematic style. The spasmodic seizings of the camera are a little too close to found footage for comfort, but I’ll be damned if that quipping doesn’t pass the time with flying colors. Sorority Row is blessed with a surprisingly credible cast for a film of its caliber, and Leah Pipes especially delivers her lines with a held-back cattiness that’s so wildly out of proportion with the horrific circumstances that surround her, you can’t help but feel a chuckle soldier its way out of your windpipe.

Its irreverent humor is perhaps its most prominent attribute, but an enthusiastically bonkers (if mildly misogynistic) third act is the savory whipped cream on top of a surprisingly tasty vanilla shake. 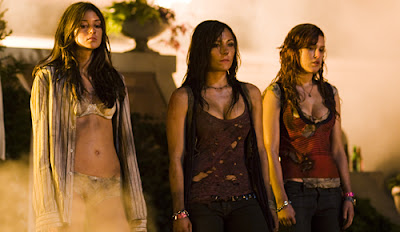 You know, one of those that looks uniform and bland but has flecks of sprinkles of something providing enticing bursts of colorful flavor in your straw… I’ve eaten nothing but quesadillas and boxed cereal for three days, does it show?

All in all, Sorority Row is a keeper. It pales in comparison to the original material, but it’s probably the most fun I’ve ever had revisiting an iconic horror property. And any remake that doesn’t make me want to tear my hair out then light that hair on fire is a plus in my book.