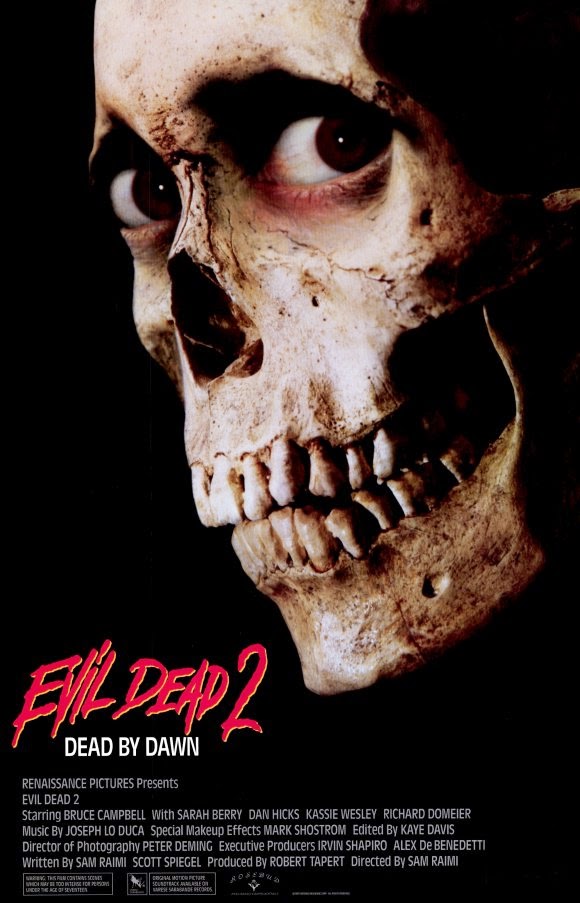 Let's get this out of the way first. Evil Dead 2 is not a remake. There has been a long-standing debate over the nature of this six-years-later sequel because it takes place in the same cabin in the woods and opens with a truncated, reshot version of events from The Evil Dead, replacing Ash Williams' (Bruce Campbell) four friends with just one - his girlfriend Linda (Denise Bixler).

This was shot out of necessity because the company that owned the rights to the original film wouldn't allow them to use footage from it to open their film. Studios are dumb. Always have been, always will be. But that doesn't change the fact that, but for ten minutes in the beginning, this sequel is its own entirely unique movie. So there. 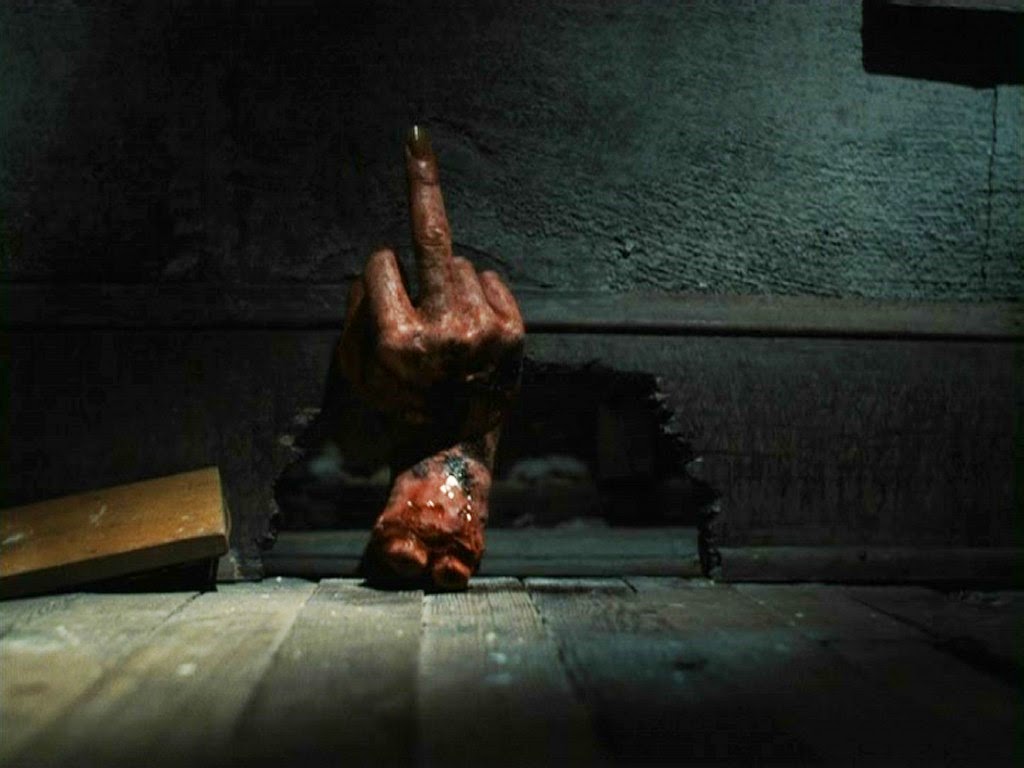 As you can probably surmise from that screenshot, Evil Dead 2 has somewhat more of a sense of humor than its fairly straight-laced precursor (and more of a budget, but that's a different story entirely). The elements of the original are still intact - zooming Steadicam shots, explosively creative and zany editing and performances, and an Amazon sized river of blood and guts. But all of it is approached from the angle of outright slapstick comedy, complete with pratfalls and silly sound effects.

This is where Sam Raimi really hit his stride tonally and discovered his talents for perfectly treading the line between the two genres, making this film the high water mark against which all subsequent cross-genre attempts would be measured. I've included it on my Top Horror Comedies list at the number 3 spot and I always urge anybody who hasn't seen it to immediately find a way to get it onto their TV screens.

But I can never escape the nagging feeling in the back of my mind that I just like the original a little bit better. I'm in a staggering minority here, but the lo-fi cheesefest of The Evil Dead is right up my alley, especially in terms of the gore effects which are of course present in abundance in the sequel, but more specifically comedic and less grounded in tactile physicality than the first.

I mean, yes. Here we have a ballet dancing demon, a headless body brandishing a chainsaw, eyeballs flying into mouths, spurts of blood in every color of the rainbow, and plenty of sticky grossness. It's frankly incredible. But it's more glossy and slick than the DIY gore of the glory days. I just don't adore it with my entire heart the same way I love the fleshy tackiness of what came before. 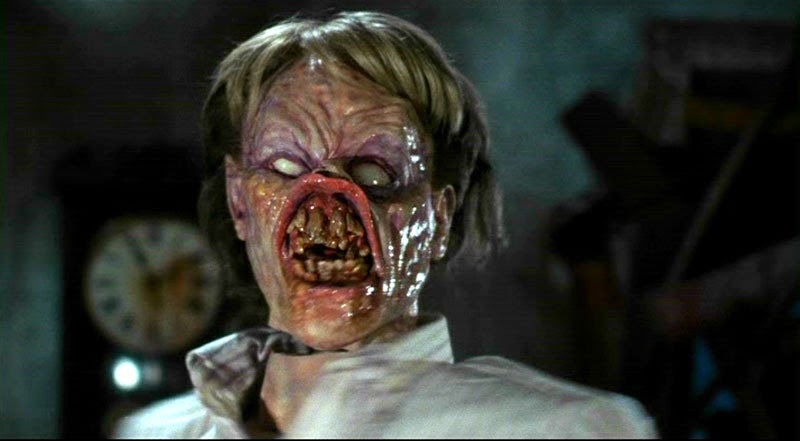 Although it's hard to hate the goo. I'm not complaining here.

That's a really minor argument and it has no impact on the quality of this film. It actually helps this film achieve its perfect tonal balance, but I guess that tone is slightly off center from the bulls-eye on my own personal dartboard.

But enough about the first one! This is the sequel! And it has more money and more humor, so let's not get bogged down in petty nitpicking.

The entire first half of the film (minus the recap opening) is basically a one man show as Bruce Campbell fights the zombiefied Linda and, later, his own hand and mugs at the camera something fierce. Ash is of necessity more fleshed out in this film, so he really settles into the character and turns him into the zany badass that would go down in history as one of the most iconic horror heroes of all time.

I have his bumper sticker on my car, even. 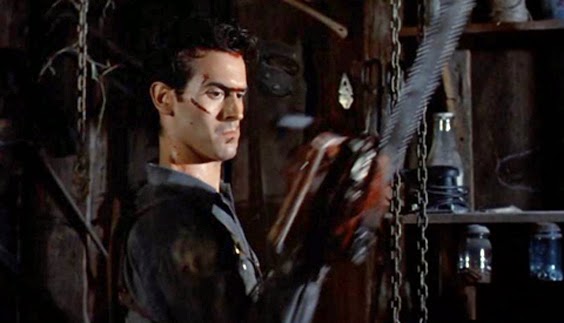 I don't even remember why I was complaining about this film. Everything pales in comparison to the chainsaw hand.

The second half throws him in with a whole crop of new blood bags. I mean, friends. There's Annie (Sarah Berry), the knowledgeable daughter of the demonologist who owns the cabin; her boyfriend Ed (Richard Domeier) who says about three lines before he's thrown onto the chopping block; Jake (Dan Hicks), their hillbilly guide through the forest; and Bobbie Joe (Kassie Wesley), his skanky girlfriend who is attacked by the forest in a much less rapey scene, presumably to make up for the last film's sins.

It's at this point that the film slows down somewhat as it enters its plot phase. But the film never loses its humor, all the way to the very end. All in all it's a plenty terrific zombie movie, one of the best of the business. This is the film that planted Sam Raimi firmly into the horror pantheon without question and ignited the roaring fire of support many horror fans for his entire filmography.

One of the best horror sequels to ever be released and a perfect example of the horror comedy. A hit in the cult market. Hilarious, groundbreaking, and genre-defining. Not bad for a low budget feature starring nobody you know. 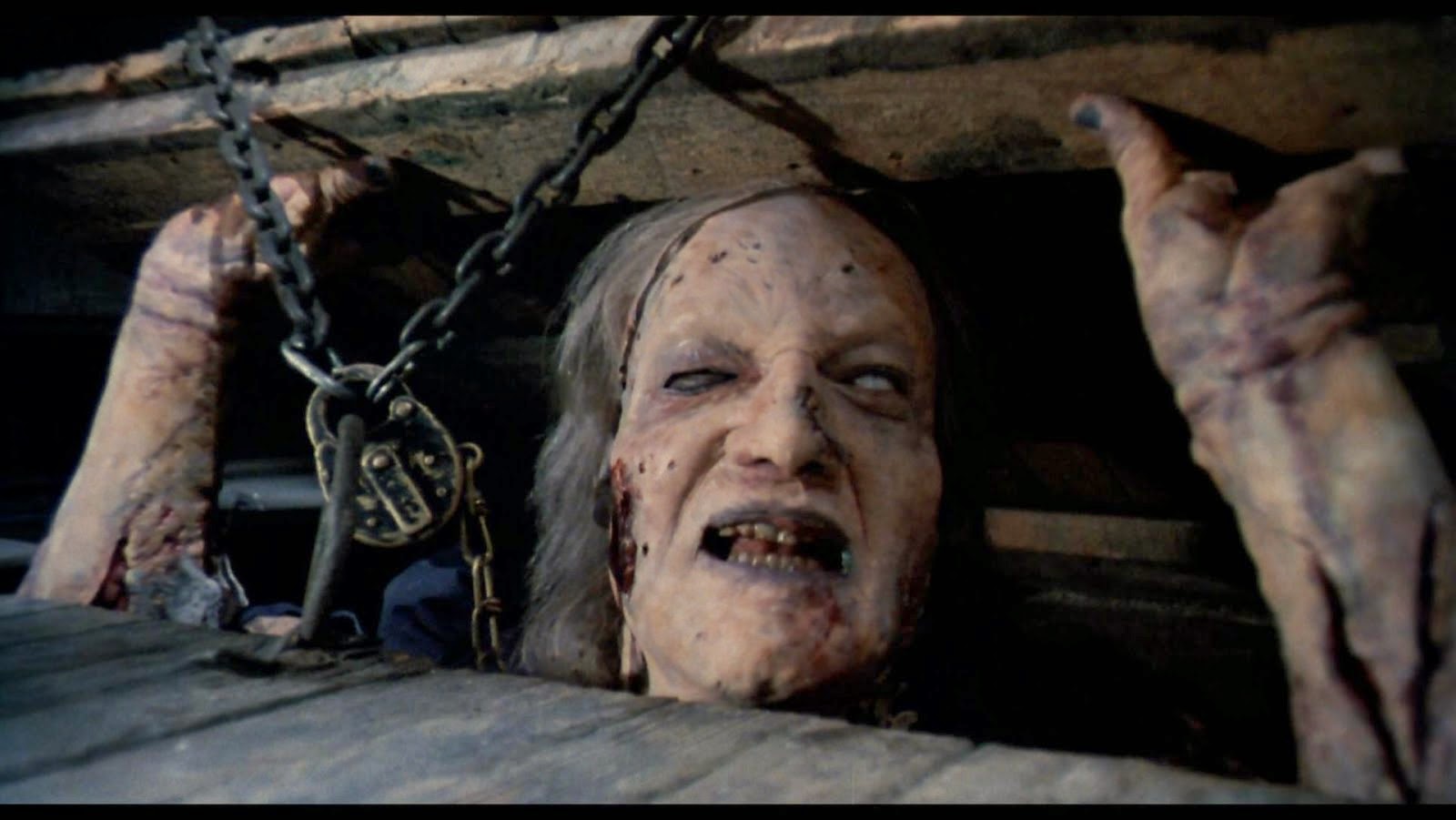