Beat It, Essay: The Book Of The Dead

So, it turns out that even though I'm the TA for the Horror Class this semester, I still have to do all the work and write the essays. What a relief! I was worried I would have to do them recreationally!

All kidding aside, I really do love this class. Because it's just another excuse to write about horror movies, something I'm clinically addicted to. Anyhow, the first one is due on Monday, so here we go. This is what the onslaught of Evil Dead reviews this week was building up to. Prepare yourselves!

Very few people have had more influence on the modern horror genre than Sam Raimi, the idiosyncratic and deranged auteur behind the Evil Dead franchise. Each successive movie has brought something new to the discussion and, in a nigh on impossible chain of events considering the current state of film studios, Raimi has had a personal hand in each of the films, directing all three of the main franchise and producing the 2013 remake.

Raimi's immense dedication to the beloved cult franchise has resulted in some of the most perversely unique and phenomenally innovative horror films in modern cinema. From his days as a fresh-faced auteur with something to prove to his tenure as a grizzled genre veteran, his lunatic vision has fueled the delight and nightmares of generations of audiences, starting all the way back in 1981 with the infinitesimally low-budget production The Evil Dead.

The story of The Evil Dead is a simple one, almost like something you would hear around a campfire. Five paper thin characters (two men, three women) spend Spring Break holed up in an abandoned cabin in the woods and accidentally unleash a horde of angry Candarian demons from an ancient book known as the Naturom Demonto. As the spirits begin to possess the flesh of the living, so begins a long and harrowing journey for perennial hero Ashley J. Williams. 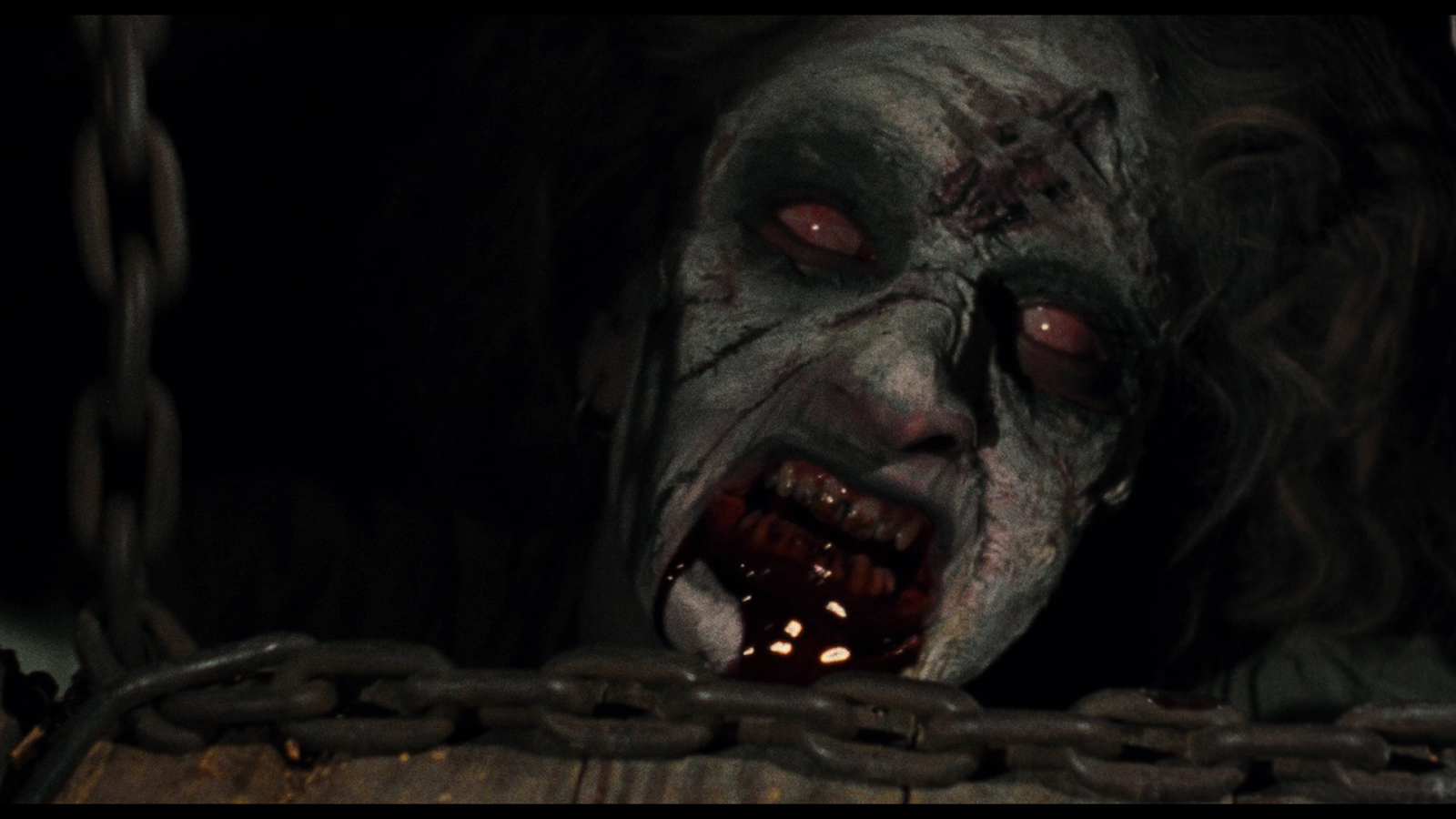 The original film is utterly unique, breaking open the craft of cinema and turning it inside out. Although it is more or less a straightforward horror film in terms of genre (and an incredibly tense one at that), the campy excesses of the gore sequences, the zany twirling and zooming of the camera, and the boisterously overproduced sound design all work in tandem to create an heightened reality entirely separate from our own. Camp and terror freely intermingle as the fleshy melodrama plays out.

The isolation of the cabin suits this tone well, creating a feeling of distinct separation from the "real world." This inventive approach brings the genre into the new decade, actively combatting the serial nihilism of 70's horror. Films like The Texas Chain Saw Massacre, The Last House on the Left, and the grindhouse holdouts of the early 70's were grubby and bleak, whereas Raimi's undead tale has a keen awareness of its own excesses and a sense of "Look what I can do!" glee throughout the proceedings.

The film's portrayal of the undead follows along much the same lines. The undead (which, it can be argued, are technically Candarian demons, but it does not do one well to try to impose rules upon a Evil Dead movie) could easily kill Ash if they had a mind to. In fact, three of them spend a large portion of the second and third acts in the same room as him. But the fact that they are content to play with their captive like a cat with a mouse is reflective of the director's approach to the film and the concept of cinema in general.

Despite the film's darker tinges like the brutal forest rape scene and some intense tactile gore, for the most part Raimi wants to play. The simplicity of the story allows him to push the envelope of cinematography, shot composition, editing, performance, effects, and just about every single element that makes a film a film. From a man who spent a decade watching increasingly downtrodden horror films, The Evil Dead provided a shot in the arm to audiences, inoculating them from nihilism and preparing them for the campy explosiveness of a decade that would come to a crux with films like Re-Animator, From Beyond, and Raimi's own Evil Dead 2. 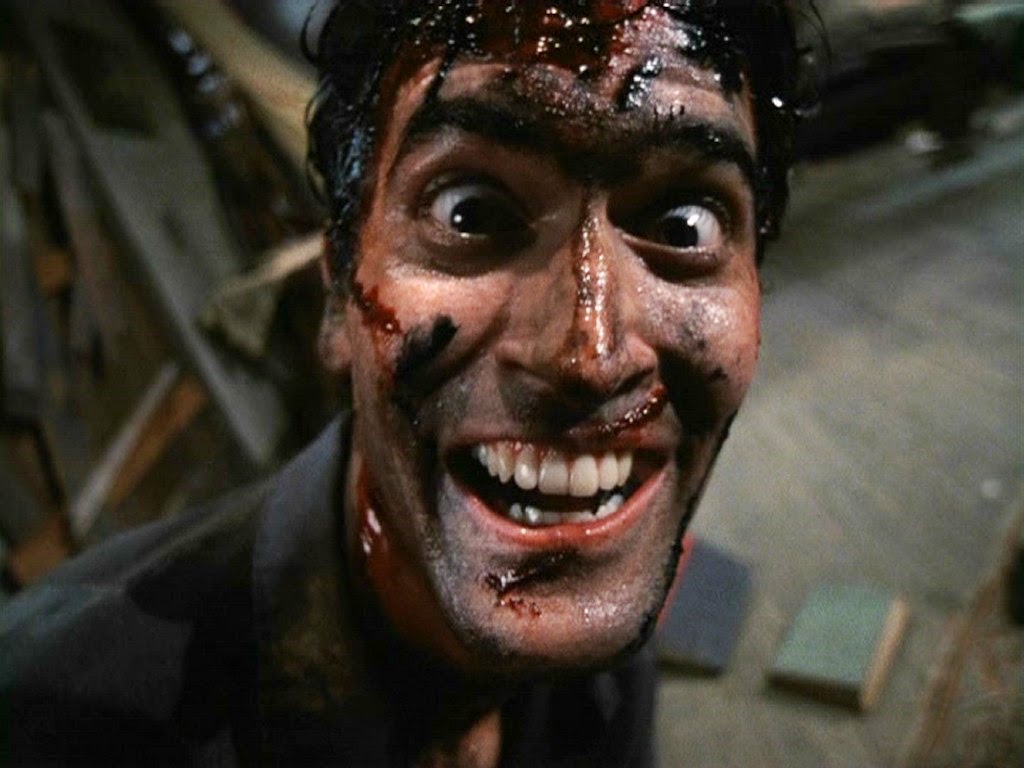 A lot can change in six years, and such was the case with Evil Dead 2. As the decade went on, horror films became increasingly silly and inconsequential, expanding on Raimi's own campy premise with delight but pushing it too far into the realms of fluff. There were still classics of the form around the time of the Evil Dead sequel, but it acts as a course correction for the woebegone majority of horror films in the late 80's. The truly Raimiesque quality of the film is that it does so by amplifying the genre even further, becoming what is essentially a parody of the first film - a perfectly balanced combination of outrageous campy comedy and gross-out gory horror.

Taking a cue (and a Necronomicon) from H. P. Lovecraft, this film explores even deeper and darker themes in terms of horror while simultaneously engaging in slapstick pratfalls and Bruce Campbell mugging, all wrapped up within the loopy and revolutionary aesthetic of the original film. The undead in this film are even more playful and comedic, but the loose rules governing them makes them absolutely manic and unpredictable, highlighting the terror of the film as it gracefully dances upon the line between two disparate genres.

At one point, Ash even becomes a demon himself, exemplifying Raimi's no-holds-barred, over-the-top approach to his own story, a reaction to both the state of the genre and the increasing seriousness of American affairs at that time. This time around, the demons aren't the enemies, merely playthings to distract the audience (and Ash) from the darker activities swirling around the edges of the frame and in the backs of the audience's minds. 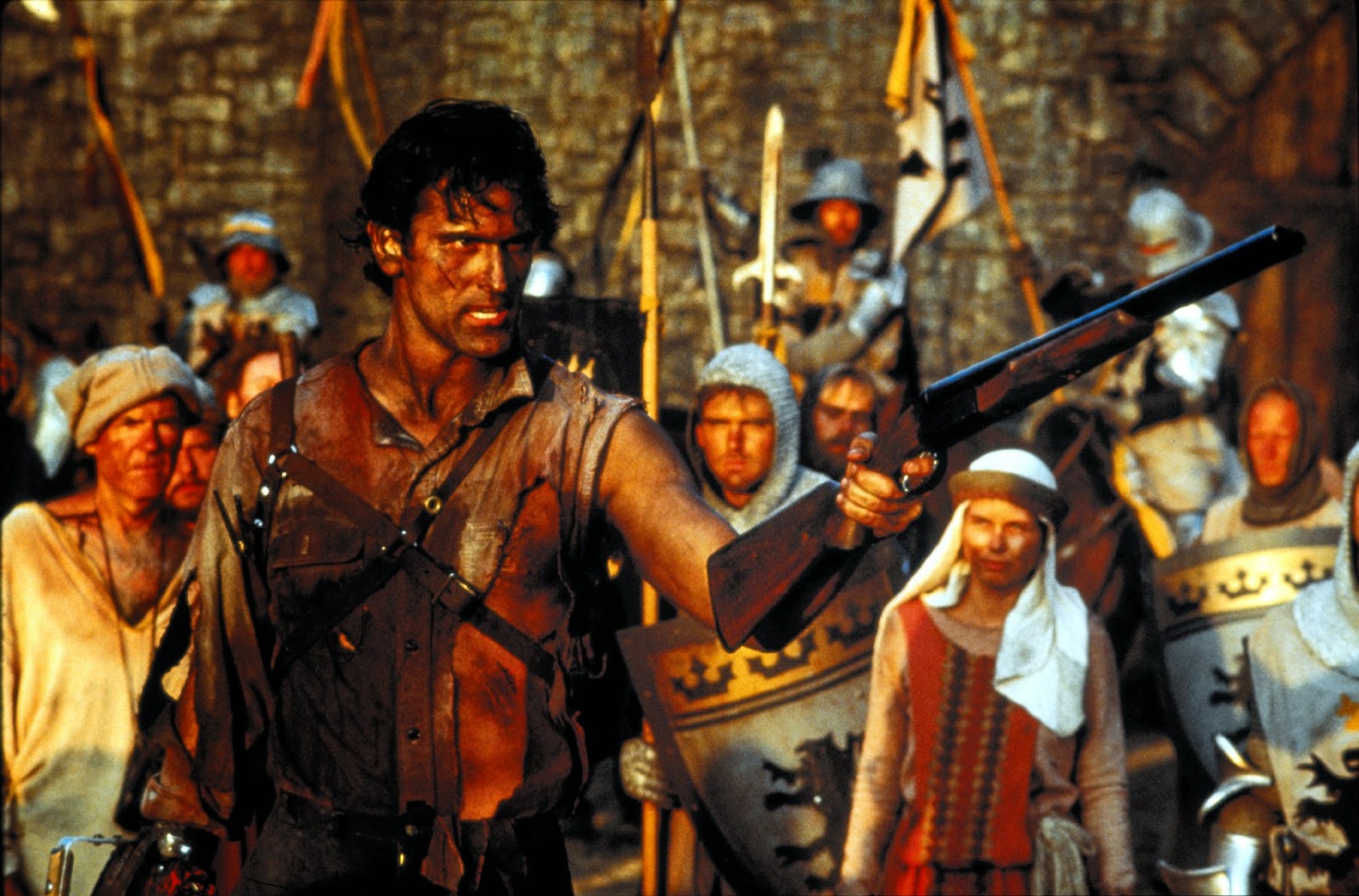 Another five years after that genre-bending stone cold masterpiece, Army of Darkness came barreling out of the chute. Raimi knew he wasn't going to be able to replicate the success of his earlier films if he rehashed the same plot for the third time so he lifted out the slapstick elements of Evil Dead 2 and married them onto an effects-driven swords and sandals action flick. This also had the effect of satisfying the censors, who had started tightening the reins on gory horror around 1989.

Army of Darkness ended the original trilogy and, as such, continued to utilize the traditional filmic elements of the franchise as it progressed naturally to a more overtly comedic register. Ash's mugging and physical comedy reach their absolute peak in this film and Campbell's Jim Carreyesque performance tamps down the horror to let the comedy shine. Toning down the gore and horror of the earlier installments in the franchise allowed this concluding film to explore the consequences and results of the previous two, acting as a personal exploration for Raimi as well as a loving sendoff for the series that made him a household name.

In between the always fresh and clever Three Stooges recreations and slapstick vignettes, Army of Darkness spends more time exploring Ash's character than any of the preceding films. After having lost his girlfriend no less than three times and had two sets of friends ripped away by the Deadites, he is left a bruised and scarred survivor, closed off to the world and uncaring about its inhabitants.

Because of this more careful exploration of character, the nature of the demonic menace is quite different. Instead of an intimate selection of prancing demons, he is facing a vast army of the undead led by his own shadowy doppelgänger. As he struggles to overcome his selfishness and learn to care about his fellow human beings enough to save their town, he literally battles the darkness within himself and a skeleton battalion representing each and every corpse he left behind in that cabin, eventually coming out on top, renewed in spirit and more heroic than ever. The perfect ending to a stellar franchise. 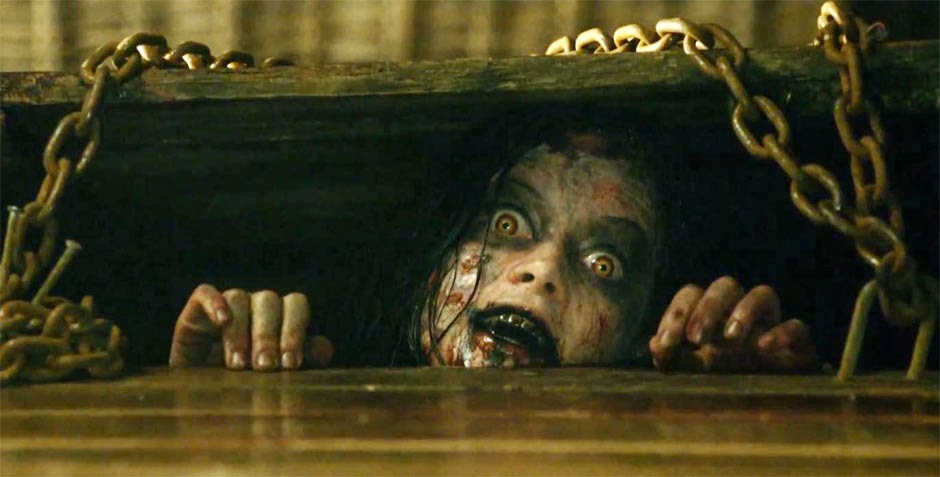 Of course by now we have all learned that Hollywood is incapable of leaving well enough alone, so naturally a high budget remake was slated for 2013. Fortunately, the modernization incorporated many of Raimi's classic elements including the hurtling POV camera, the American gothic cabin design, upside down shots and the like. His ever fresh repertoire of film tricks is an essential element at the core of Evil Dead's being.

Evil Dead suffered somewhat from a lack of necessity, but returning the franchise to its roots as a straightforward horror film did it well. Evil Dead is again a harrowing survival tale, this time populated with characters that are fleshed out (save one or two who are merely, shall we say, fleshed apart) and recognizable to any modern audience member.

The introduction of the drug addiction concept to keep the young men and women in the cabin and unaware of the initial horrors that are occurring was nothing less than genius and more than validates the film's reasons for existence, at least in terms of being a well-shot and gory horror movie for the 21st century crowd. And the film does capture some of the energy of the original trilogy, although it is diluted through the tamperings of a big budget studio.

The undead here are merely beings of pure evil, a bane of the overly simplistic remake culture of the late 2000's. Thanks to landmark films of the decade like Saw and Hostel, the demons are more focused on grossing out their prey (and the audience) than psychologically tormenting them, and while the film does succeed in bringing the themes and ideas of The Evil Dead into a modern setting, perhaps that isn't necessarily the best place for them. 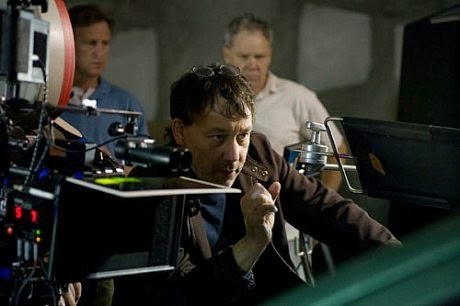 Although it is certainly the weakest of the entire franchise, Sam Raimi's limitless abandon in approaching his material (even as producer) sends it across the finish line in fairly good shape. That same indefatigable enthusiasm is what made the Evil Dead films as important and influential as they are today and will remain for many years to come.

Each film uses Raimi and his boundless enthusiasm as the glue that holds them together as well as the unlimited supply of fuel that provides them with the power to explore deeper and deeper aspects of character, society, the horror genre, and cinema itself. The characters of the undead constantly bend, snap, twist, and break, allowing themselves to be the skeleton (pun intended) upon which a fantastic tale of cinematic imagination and intimate inspection of ourselves and the world around us can hang.

Their nature is formless and adaptable, crossing genres, decades, and bodies, all to further the one thing that propels his work - the deep love and respect he has for his craft and for bending the rules to create bigger and better universes. Everything in The Evil Dead comes from a place of joy and giddy childish glee at the sheer act of cinematic creation. This reason, more than any other, is why these films have survived the test of time despite the limitations of their budgets and technology.

They resonate subconsciously with audiences across the globe, all of whom can feel the depth of the creator's passion and his sense of the limitless opportunity of the medium. That, more than consistent story or character or even genre, is what links the individual films of this zeitgeist franchise. You don't need to have the best equipment or actors or makeup around to pour your heart into a story as long as you have the sheer nerve and gusto that Raimi instills upon everything he touches. And Hollywood would do well to recognize that.
Word Count: 1991
Also sprach Brennan at 9:37 AM