Hello everybody! Guess what! This is my 200th blog post on Popcorn Culture!

I started this blog in mid-June in 2013 because it was summer and I was searching for something creative to do. It's been massively rewarding for me and although I've been so busy these past couple months with some really intense classes, I make it a priority to keep posting as often as possible. And so far, every movie I've seen since that day in June has made it onto this blog! (Except for, oddly, The Exorcist, which somehow slipped through the cracks. I don't know what happened. I apologize to all of you who avidly watch my "Coming Soon" widget. It can't be helped.)

Since that fateful day, I have reviewed 174 films, 130 of which were horror films! At least I tried paying attention to other genres. Good hustle, Brennan. 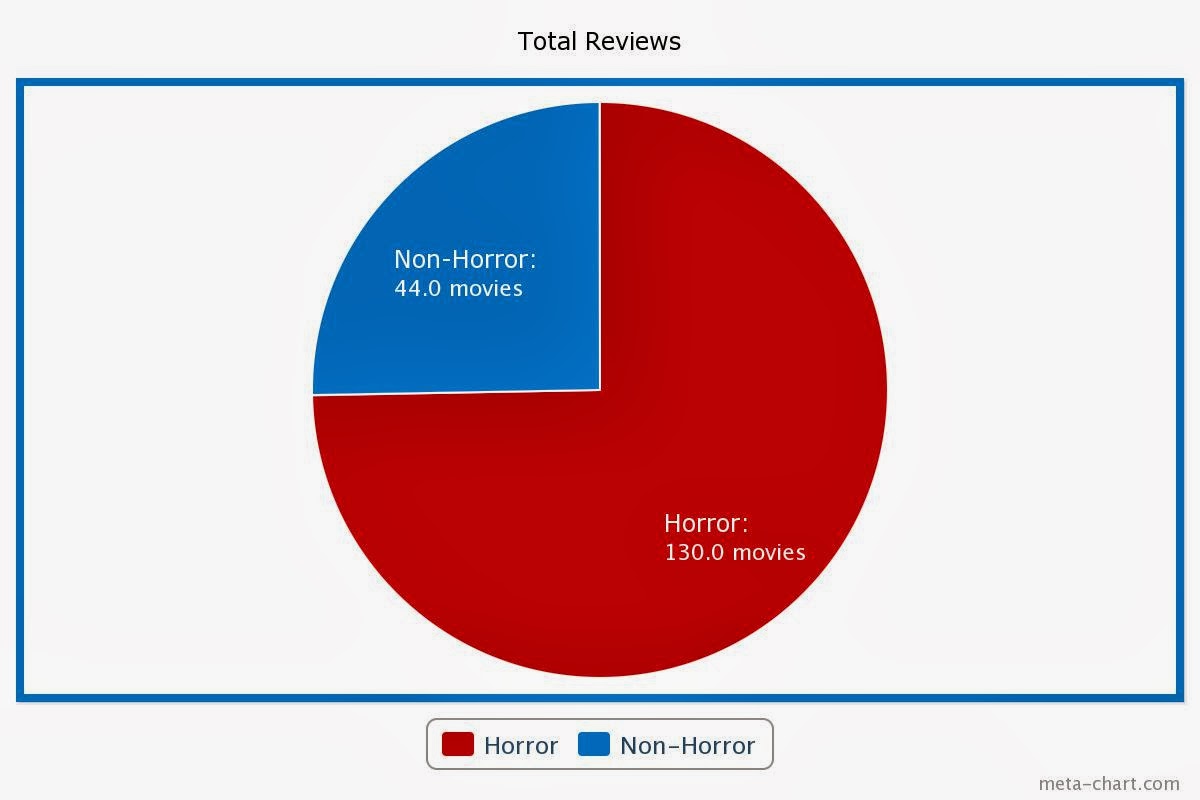 Out of those reviews, the most were (obviously) from this decade, but the 2000's and the 1980's come in a close second thanks to my Census Bloodbath and J-Horrorthon features. 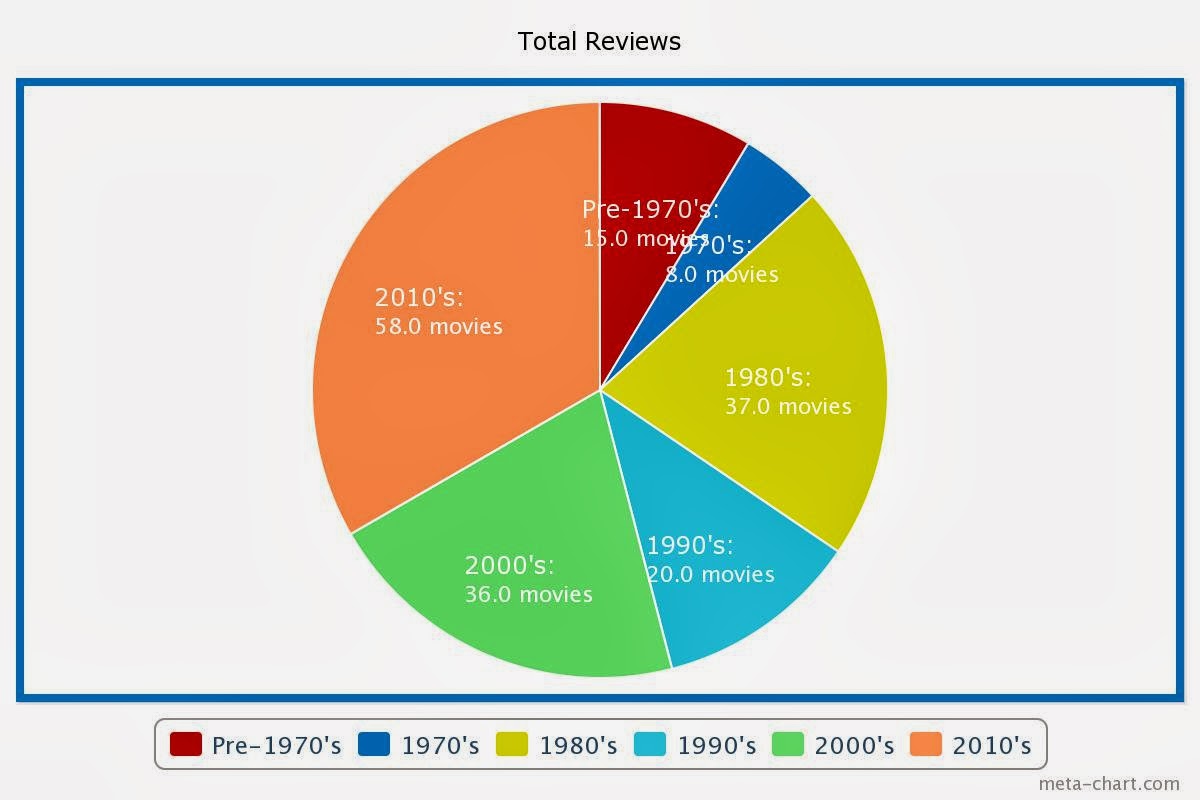 And I was prone most often to giving out ratings of 6 or 7 (they tied for first with 37 each), but let the record show that I gave good reviews more often than bad ones, despite what Sergio might think about me. 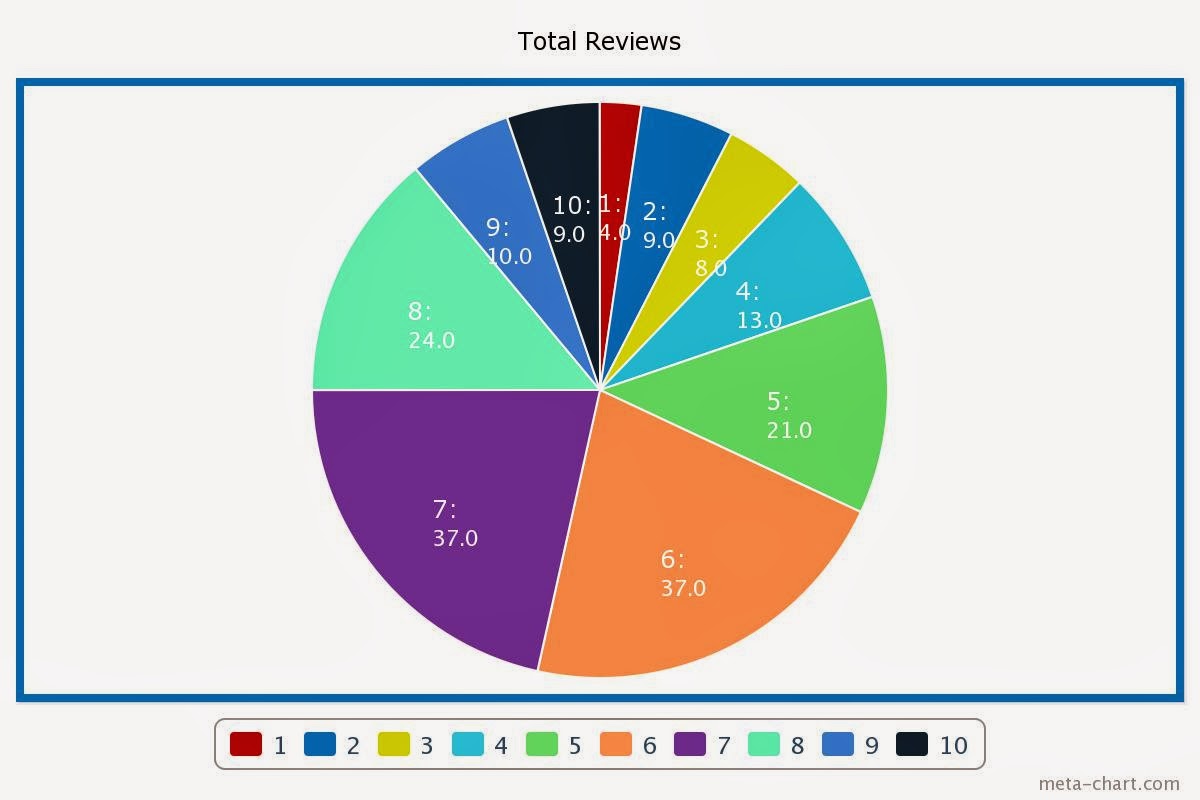 A moment of silence for my tired typing fingers.

But it all goes to show how much thought and devotion I put into everything I do here. I really really love this blog and I'm happy every time anyone so much as looks at one of my posts. I really appreciate people being interested in what I have to say and I work hard to make sure that everything I write is of the highest quality I can provide.

Obviously I'm not gonna be on my game every day out of the year, but I really appreciate every second of time anybody has spent reading this blog. It really means a lot to me and I strive to make that content worthwhile.

If nobody minds, I'd like to take a minute to talk about what film, horror, and this blog mean to me. 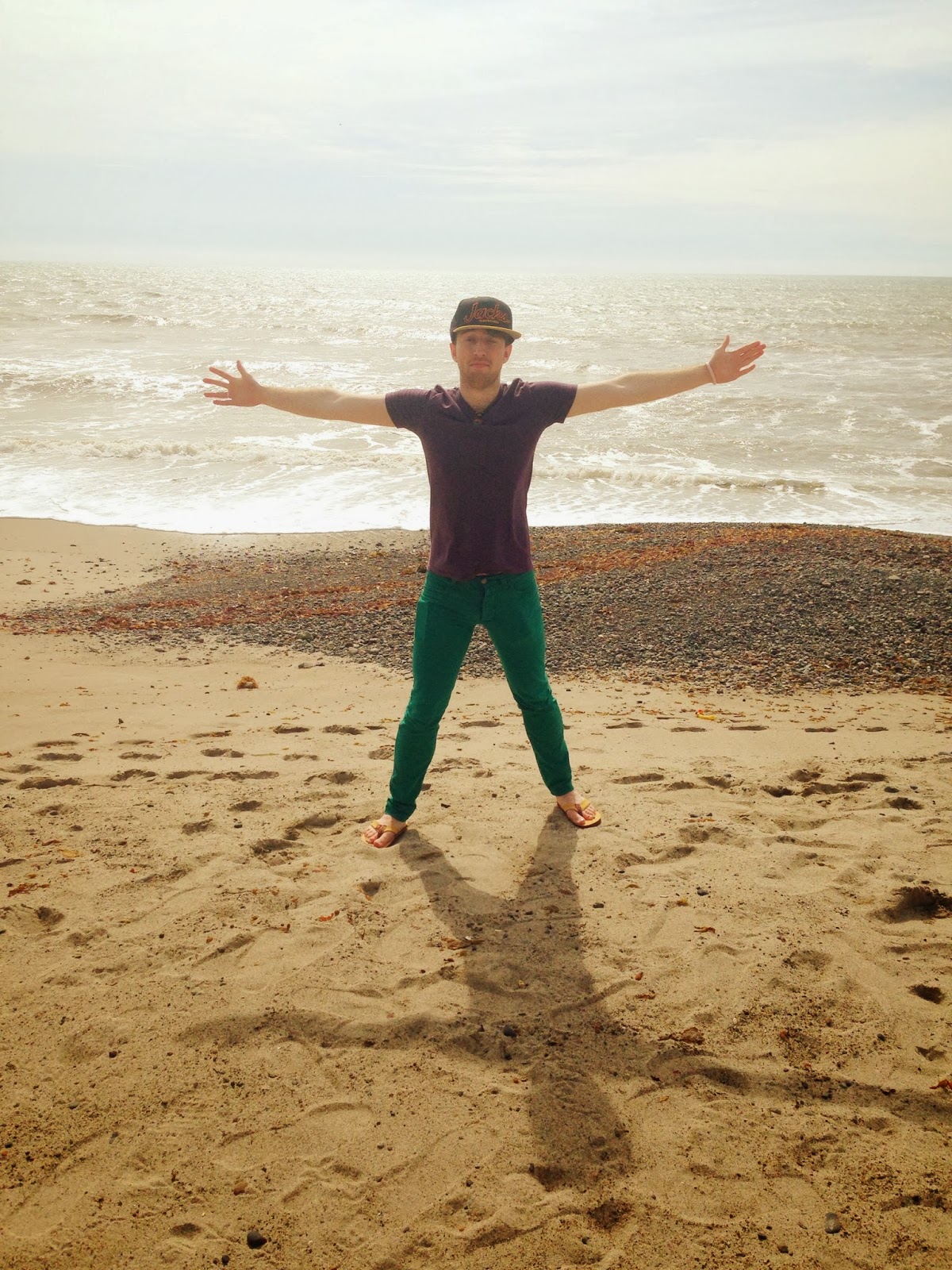 Way back when I was applying for colleges, I was a theatre kid looking for a theatre major but all of a sudden, the summer before senior year, a switch flipped inside me. I had begun to direct short plays in class, and discovered that I had a talent and a passion for creating new worlds.

My plays notably had the most thorough and involved set design of every class. Where other plays would just set up some black IKEA tables and chairs, mine would be full rooms with keepsakes, decorations, colors, and three dimensional interior design. The amount of time and energy I spent on assembling decorations for a room that doesn't even exist got me to thinking.

My quasi-OCD commitment to organization and exact detail made me light up any time I got a chance to dive into a new world full of new people and experiences I had never met and would never have. Combined with my newfound passion for the horror genre, I realized I needed to go into film.
I still love the theatre, but film gives me a lot more license for creation, which is something I discovered I had a drive for. 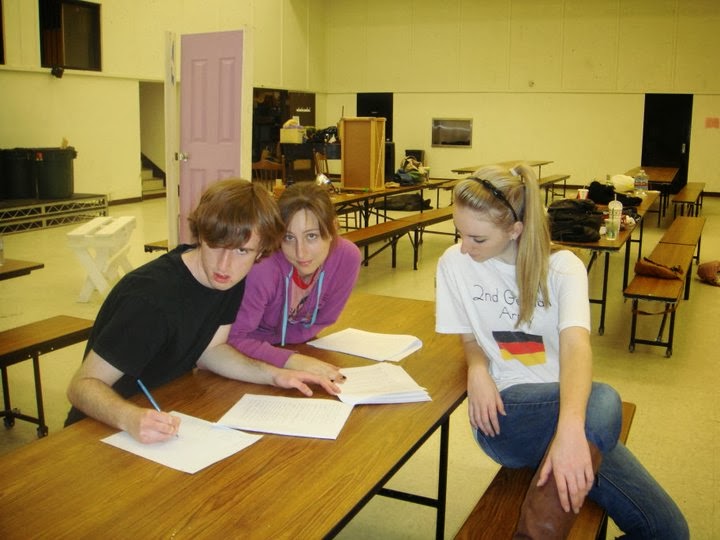 I'm a smart guy. So now and then as I'm going through my film classes I have to sit back and think about what this career direction means to me. Why should I be doing this when I can devote myself to some other discipline that can actually make an impact on the world, like medicine or law?

But when I think about it, there's nothing I'd rather be doing. And I realized that art and entertainment are more important than they seem at first glance. Sure, Hollywood can be superficial and wicked, but entertainment is a necessary and vital part of the human experience that can be traced back to the very origins of human society.

Entertainment may be a diversion that is unnecessary for life, but it is vital for a healthy mood and development of the mind. Entertainment at its foundation is a distraction from the drudgery and rigors of day-to-day life. And at its pinnacle, it is a medium through which we can learn different perspectives on the world and begin a conversation about non day-to-day issues that are important for the world and the community.

Film has the power to open our eyes to the truth about the world. It has the power to change a mind. Or, at the very least, it can make us laugh, cry, or feel. Anything. In modern society, we don't have a lot of outlets for emotion and film, television, and music are an essential part of maintaining contact with ourselves.

And yeah. Some of it is just dumb diversion. But who doesn't need that every once in a while?

So yes. Entertainment is important. And by writing about it, engaging with it, and creating it, I can add to the conversation rather than just consuming. 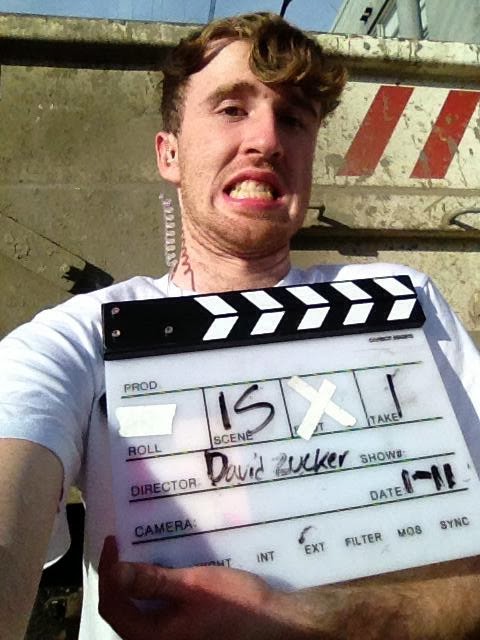 So what of horror, my chosen genre?

I'm still working out with myself exactly what draws me irrevocably to the notorious horror genre, but it is in large part due to the fact that anything can happen. In my mind, horror is a kind of dark fantasy, permitting the nightmare world of our subconscious to come to the forefront.

Good horror tells us something about ourselves, whether it is how we might react in a certain situation or our secret dark, dangerous desires. More often than any other genre, horror depicts the truths of the human condition because it isn't afraid to delve into that dark, terrifying pool of the human psyche.

Even the dumbest B-movies tend to have more psychological impact jammed inside than your average Hollywood flick. Horror is a place where we can explore stories and themes that nobody really wants to talk about and that's wildly important.

It's also a cathartic way to face our fears and, at its most basic level, a wonderful adrenaline rush.

That's where I've gotten so far, but I'm sure I'll have more to say once I have a chance to mull it over ad nauseum. 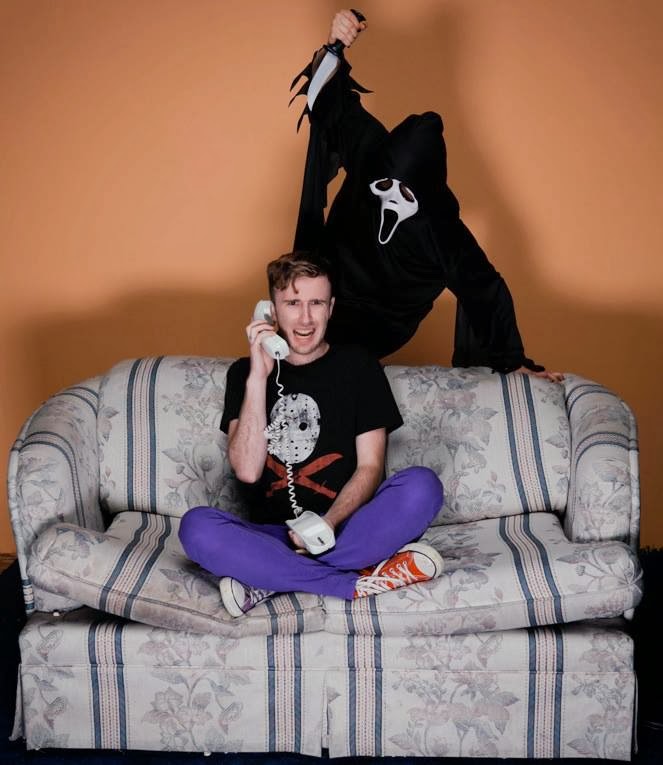 Whatever the reason, I am very grateful for my rapidly growing little (mostly) horror culture blog. It has provided me with hours of constructive entertainment and a lot of opportunities I might not have had before.

It's a chance to sort out my opinions and a forum to share the things that I love!

Most importantly, it's absolutely lovely to have a channel where I can practice being funny and developing a voice and have people read it! Writing every day has greatly improved my language skills, made 700 word essays a much less daunting task (writing a 700 word essay the day after writing a 2000 word slasher review just doesn't seem as challenging), and has forced me to think out my arguments here and in the real world.

Through this blog I've made new friends (shoutout to Carolann if you're reading this!), seen movies I never thought I'd watch, learned a lot about film as well as myself, and just had an all around good time.

It's a real gift being able to rite about something that you love and I hope everybody has a chance to do something like this at some point in their lives (In fact, it's free! Why not try it out?).

Last but not least, I would just like to give a great big thank you to everybody who's stuck it out with me. Thank you for reading and thank you for your feedback. I really appreciate what you've done for me and, should you start something like this of your own, I would gladly devour each and every word of what you produce.