This Movie Is For Real 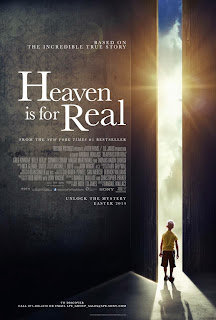 
1) Really? We couldn't change the title? On a book, it's kind of catchy and childish in the way that makes you want to at least read the back, but for a film it's an absolute travesty. It's hard to take the soaring orchestral music seriously when that title appears onscreen.

2) Greg Kinnear is not human. He is a programmable android shared by all movie studios to appear in the maximum amount of films possible. Maybe they're pursuing some sort of world record. Maybe it's something more sinister. But it's physically impossible to appear in as many films as he has.

3) People need to start hiring short adults to play children, because if this is everything the child acting pool has to offer, I want my money back. I want their money back.

I want my dignity back.

4) Last, and most importantly, why is this trailer shot like a horror film? This kid went to heaven and apparently he brought something back with him. Discuss.
Word Count: 196
Also sprach Brennan at 10:22 AM