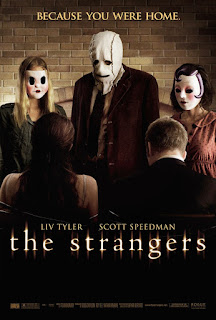 I consider myself a wee bit of a horror expert, but one of my hugest blind spots has definitely been The Strangers, the 2008 home invasion film that was almost immediately minted as a modern classic. Now, I'm not here to strip it of that status, which it rightfully earned, but the reason I've been avoiding it for ten years is pretty similar to the reason I didn't love it as I watched it in prep for the sequel. 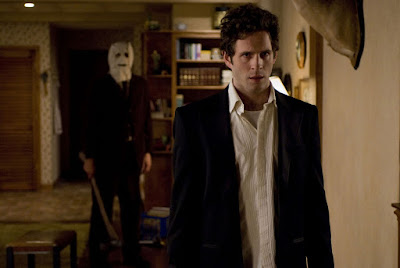 I don't need anything distracting Dennis from It's Always Sunny in Philadelphia.

The Strangers is about a couple: James Hoyt (Scott Speedman) and Kristin McKay (Liv Tyler). Their suffering begins long before the horror plot kicks in, because she has just refused his proposal at a friend's wedding reception (way to steal the thunder, my dude). They continue their planned trip to his family's summer house, but there's an icy rift between them that prevents them from talking in anything above a forlorn whisper.

Their night is interrupted seemingly innocuously when, in the middle of the night, an unseen girl knocks on their door, asking for Tamara. They turn her away, but when James is on a cigarette run the girl returns. It soon becomes evident that she's not alone, because she is one of a trio of masked strangers who have come to murder the crap out of this couple. Thus begins a Long Night of the Soulless, where James and Kristin struggle to survive in any way they can. 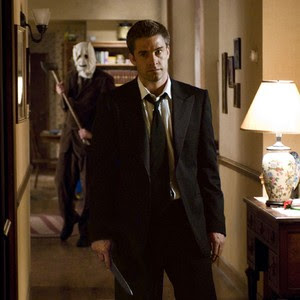 I do admire The Strangers for its bold formal choice at the beginning, pulling a Texas Chain Saw Massacre with a gravelly opening monologue about how this movie is "based on true events" that "totally happened, we promise." That's a fun move that shows how it's in touch with its horror predecessors, but it's probably the only thing about the movie that could be called fun.

Not that that's a problem. The bleak register The Strangers operates in has been a boon to many a classic chiller, but in my mind they work a little better when the movies are a little better. The Strangers has plenty of elements that really work, which we'll go into in a minute, but the pacing has some serious problems. And that's pretty shocking considering that, when all is said and done, by the time the super slow, feature-film-run-time-reaching credits roll, only one hour and seventeen minutes have elapsed.

For one thing, I just scrolled up to check something in the first paragraph and I thought I'd accidentally embedded the same screenshot twice in a row. Nope, those are two different scenes about thirty minutes apart, which should tell you just how committed to repetition this movie is: walk down a hall, hide in a small space, leave the small space, return to the small space, find a new small space, lather with blood, rinse, repeat. I understands the constraints of the low budget horror world, but the movie doesn't utilize the space for anything other than slow stalker shots of people who really should know to look behind them at least once every five minutes or so.

Also, the grainy handheld aesthetic the film uses just hasn't aged particularly well, but that's not entirely its fault, so I won't dwell on that one. And I hate to say it, because she does do well in the terror scenes, which are really the most important, but anytime Liv Tyler has a line of dialogue, it's delivered in a breathy whisper like she's in a hypnotic trance. Most of the movie isn't dialogue-driven, thankfully, but that vacant Marilyn Monroe burble drags you out of the movie like an electromagnet. 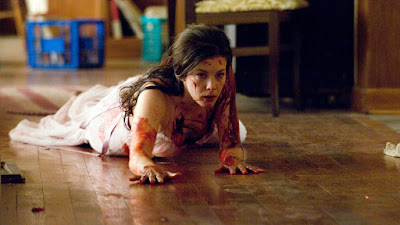 I wanna be stabbed by you, just you, and nobody else but you.

But all that aside, The Strangers is still spooky as heck. Home invasion movies are good at getting under the skin of just about anyone, but the masks are so spectacularly well-designed that they'll stick in your nightmares much longer than any of their peers. And the sound design is also pretty sharp, buffeting you with eerie silence until a sudden sharp shock slices through the tension.

But one thing that really skeeves me out the most is the fact that the masked figures here are actually given a voice. It is established horror movie dogma that masked killers don't speak, because it is scarier that way. But when the doll face mask mutters one line in a cruel monotone, that's even creepier because it's not supposed to happen. By breaking the rules and conventions of the horror genre, The Strangers reached an even higher plane than those that came before, at least for one scene, and that's the reason it's a classic.

The atmosphere created by The Strangers is unassailable, and certainly the reason it has enjoyed such a sterling reputation in spite of its fairly major flaws.

That said, the bleakness and lack of catharsis in this movie isn't for everyone. You have to be in a certain mood to truly enjoy The Strangers, because it is not a movie designed to be enjoyed. It's designed to be a sensory battering ram, and it's just as blunt, crude, and powerful as you'd expect one of those to be.

TL;DR: The Strangers is a solid low budget shocker, though it obviously has its limitations.
Rating: 6/10
Word Count: 926
Reviews In This Series
The Strangers (Bertino, 2008)
The Strangers: Prey at Night (Roberts, 2018)
Also sprach Brennan at 10:39 AM