How has it already been seven years since the original Insidious? This franchise is already as venerable as Saw was when it reached its pre-2017 conclusion, and that's a cold hard fact I'm just not ready to face.

Well, more than half a decade in we've reached if not a final film, at least a turning point in this baby brother franchise to The Conjuring: the film that connects the events of prequel Chapter 3 and the original film, completing the arc of Elise Rainier (Lin Shaye's medium character, who went from being the Zelda Rubinstein of the series to helming two horror tentpole features, which is by far the coolest thing about these movies). 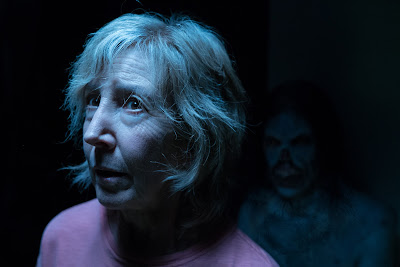 The fact that a 74-year-old character actress is now headlining movies for teens makes me absolutely giddy.

Insidious: The Last Key traces Elise's roots back to her hometown of Five Keys, New Mexico. When a client calls her to investigate a haunting in her own childhood home, she and her sidekicks Tucker (Angus Sampson) and Specs (Leigh Whannell, who returned to pen the script for the fourth time, beating out Saw, which he bailed on after three entries) encounter the demon Keyface (Javier Botet), who is the key to unlocking the secrets of Elise's past. 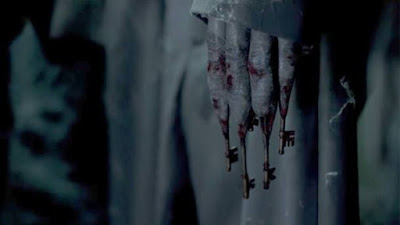 It's literally impossible to talk about this movie without accidentally making at least 32 key puns.

I initially approached this movie looking for subtext I could use for my new Dread Central column Brennan Went to Film School (first article out January 16th!), and I had my mind blown just a teensy bit. There is a lot of material surging beneath the surface here. While I chose to focus on the feminist Me Too metaphors for sexual assault and whistleblowing, there's also a lot of material about the cycle of abuse and creating your own family. I'm just getting this out of the way now, because I won't really be mentioning these things in my review, as important as they are. You'll just have to wait for my column, folks. It's a goodun.

But as surreptitiously smart as the film is, there's still something a little unsatisfying about the way the story plays out. The plot introduces a lot of threads that are never returned to (the opening quite obviously sets up that Keyface needs to open five doors for some nefarious purpose - and his fingers even have four out of five keys - but instead of having a Thanos-esque collection of keys provide our ticking clock to some grand evil, only one door is ever opened and that plot goes nowhere), some setups with microscopic payoff (they make such a big deal out of Specs having lights on his glasses, and then he never really uses them), and in general it just reeks of cuts and reshoots.

And the intelligence of the screenplay screeches to a halt every time Bruce Davison is onscreen as Elise's younger brother Christian. He is forced through a meat grinder of maudlin, exhausting family drama tropes that simultaneously accomplish the twin feats of deflating the tension and making him look like an idiot horror movie character. 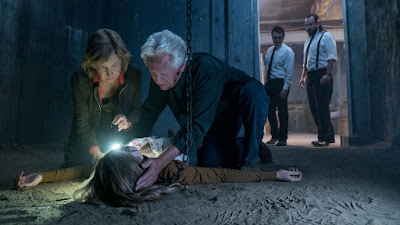 The reason this has happened is that he went to a haunted house to find a whistle he had no reason to believe was actually there. His Mensa membership card is not in the mail.

Also, the real insidious presence that has always been in this franchise is the comic relief from Specs and Tucker, who can sometimes hit the perfect pitch, but mostly feel a little jammed-in and reek of flop sweat. That stench reaches its peak here, where most of the humor is mined from their creepy obsession with Elise's much-younger nieces, who arrive about halfway through the film and are subject to non-stop leering from that point on. It's creepy and it's icky, and it ever so slightly undermines the rest of the actually smart stuff the script has to say.

But... Taking all that into account, there is some pretty effective atmosphere at work here. The Last Key lacks most of the jack-in-the-box jolts that have defined the franchise (save for one scare gag, which utilizes a hoary old trope and flips it on its head in the best possible way), relying on some slow burn creepy imagery to add fuel to that fire. The key image from the trailers - the demonic finger key going into a girl's neck - is obviously incredible, as is the Keyface demon itself (I maintain that Javier Botet is the Lon Cheney of our time, bringing incredible monsters to life and consistently being the best part in films both terrific and mediocre, including [REC], Mama, It, The Conjuring 2, The Other Side of the Door, The Mummy, Alien: Covenant, Crimson Peak, and even The Revenant).

Plus, you can never go wrong with Lin Shaye. In her long career she's been handed a lot of crap, but the woman who can take a one scene role in Amityville: A New Generation and make it a layered portrayal/highlight of the movie has earned a lead role and she crushes it.

And I won't say much about this, but there is a plot twist that will send chills down your spine, blasting into the safe PG-13 world of The Last Key like a window suddenly opened to the burning sunlight. As a popcorn horror movie, it's weaker than the previous entries, but there's still something there that's more than worth seeing, if you're into this sort of thing. And to the tune of $51 million worldwide, it seems that somebody out there definitely is.