The Bear In The Big Blue Coat 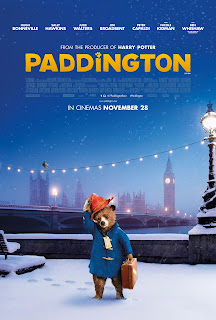 Back in 2014, when the original Paddington was released, it made hardly a blip on my radar. And why would it? I do have a boyfriend who takes me to a lot of kids movies, but that's because he's an animation buff, so this one didn't weigh heavily on his consciousness either. And the character of Paddington is certainly more of a UK phenomenon. Being American, I'd certainly heard of Paddington, but had no affection for him to match that of, say, Harry Potter, The Little Mermaid, or hell, even Amelia Bedelia (I would watch the crap out of an Amelia Bedelia movie, by the way). 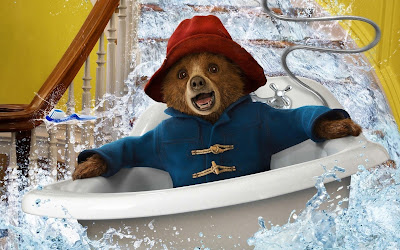 Not that Paddington doesn't also make his fair share of terrible decisions.

To my point, I had no idea that Paddington was an actual talking bear, and not a magical stuffed teddy bear á là Ted. I still don't honestly believe that. Someone report back to me and let me know. Anyway,  Paddington (Ben Whishaw) is a talking bear from Darkest Peru who has come to England after the death of his Uncle Pastuzo (Michael Gambon) and the retirement of his Aunt Lucy (Imelda Staunton). These bears were taught about the English language and customs by the explorer Montgomery Clyde (Tim Downie), who promised that the bears would always be welcome in his native land.

Now, many years later, Paddington finds that London is not the glittering gem of hospitality he was promised. The city is a cold, unforgiving place (as Babe could have told him), and it's going to be harder to find a family to take him in than he thought. Fortunately, he catches the eye of artist and author Mary Brown (Sally Hawkins), who allows him to spend the night with her family; protective fuddy-duddy husband Henry (Hugh Bonneville), hormonal tween daughter Judy (Madeleine Harris), and inventive young son Jonathan (Samuel Joslin), and matronly aunt Mrs. Bird (Julie Walters). Thus begins a sweet fish out of water comedy, where Paddington's misunderstanding of English culture, penchant for clumsiness, and absurd love of marmalade get him into quite a few scrapes, but eventually allow him to wiggle his way into the hearts of everyone in town.

That is, except for Natural History Museum taxidermist Millicent (Nicole Kidman), who enlists their anti-bear neighbor Mr. Curry (Peter Capaldi) to help her capture Paddington, who she desparately wants to add to her collection. 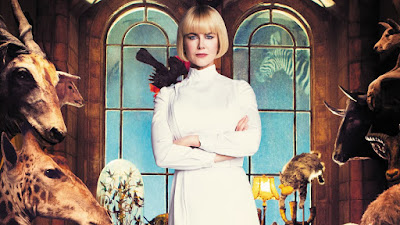 She also seems to have acquired her hairstyle from a taxidermied meerkat.

Paddington is no ordinary children's film. Or rather, it is an ordinary children's film, just done extraordinarily well. There's not a single ingredient here that feels unfamiliar, and yet fresh life is breathed into a collection of well-worn tropes by a cast and crew that is utterly, wonderfully committed to making the movie the best possible version of itself it can be.

The whole thing is just so earnest, in a way that only the British can be. Every character is quirky and fun in quiet, charming little ways (even two background characters - security guards who exist only to be knocked out by the villainess - have a fun little moment where they're playing a game involving guessing the amounts of certain nutrients in a little package of biscuits), and they play off the idea of a talking bear as if it's the most normal thing in the world. Everything in the universe of Paddington is just a little bit off-kilter, which helps to ground the fact that our protagonist is an anthropomorphic CGI cartoon.

And even though everything is twee and fluffy in the best possible way, Paddington - like all great children's films - has a thick vein of darkness running its way through the proceedings to take the edge off the sweetness. This is a movie that literally begins with a young bear's uncle dying in an earhquake, for one thing, but it's also at its core a Pig in the City-esque tale of an innocent trying to make his way through a cold, unforgiving metropolis. Does he teach people how to open their hearts and make their life's better through his unwavering optimism? Of course he ding-dang does! But on his way to that, he hears the tale of a Holocaust survivor and lives out an immigrant nightmare in an immediately pre-Brexit London. 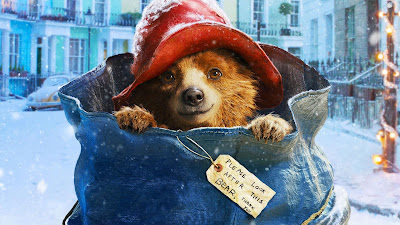 Kidding aside, Paddington is literally a story about immigration and racism, any way you slice it. The fact that it has a brain in its head only makes it more delicious, especially because it deals with these topics on a  level any kid could understand, and as gently as possible. It encourages people to love one another in spite of their differences, and it's hard to argue with that message.

But oh, how could we have gotten so far without discussing the visual style? Paddington is a candy-colored delight, full of little details and fillips that turn the live action frame into a page ripped from a fantasy storybook. From the gloriously busy design of the pneumatic delivery tubes in a huge hall of exploration archives to the deliciously grim cutaway to an imaginary orphanage, the production design is top notch. Every surface is dripping with bold primary colors and lit with the warm glow of a long-remembered childhood dream.

Everything onscreen is perfectly precise, and yet feels homespun and inviting, like if Wes Anderson decorated a playroom. And of any movie this century, Paddington probably has the most facility with actually conveying emotion through imagery rather than dialogue. In one particularly low moment, a mural of a tree in the Browns' house has all its petals blown off, which is spectacular, but the film is full of these little moments. Everything is packed with creativity and wonder, even in little visual gags like the backs of all of Nicole Kidman's mounted, stuffed heads on the wall. I don't rightly know where director Paul King (who has mostly labored in TV comedy up to this point) got all this from, but he needs to direct every kids' movie from now on. 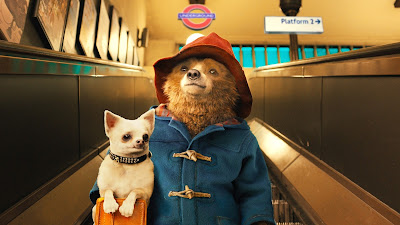 If this movie was a flavor of hard candy, I'd keep a dozen of them in my bag at all times.

Of course, this world would be nothing without the humans populating it, and they're all incredibly well-suited to the job. The whole Brown family is a satisfying bundle of quirks and clipped Britishisms wrapped around stock character archetypes, but the obvious standout here, other than Ben Whishaw - who maintains a sense of wide-eyed wonder without becoming grating - is by far Nicole Kidman. Her performance is incredibly sharp, all tiny little mincing movements designed to make as much impact as possible with ruthless efficiency. She's an incredibly retrained, genuinely scary presence that generates a significant amount of tension all while indulging in constant moments of laugh-out-loud absurdity.

So, there you go. Don't judge a book by its cover, I guess. Or don't judge a movie by the cover of the book it's based on. Paddington has no right to be as thoroughly delightful as it is, but when it comes down to it, it's an actual cinema masterpiece that works on every single level it's asked to work on, as well as a couple dozen more it tacks on just for fun.

TL;DR: Paddington is a downright delightful children's movie, and I'm so glad we have the capacity to make something like it in this cold modern world.
Rating: 9/10
Word Count: 1301
Reviews In This Series
Paddington (King, 2014)
Paddington 2 (King, 2018)
Also sprach Brennan at 9:22 AM