As our Almodóvar marathon draws ever nearer to its conclusion, let’s review three consecutive films from his early period, roughshod works born from La Movida: the progressive Spanish punk scene that formed in Madrid following the death of the dictatorial, conservative King Franco. 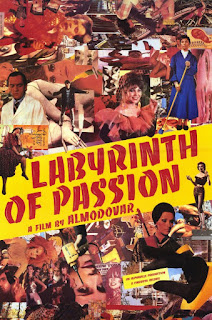 A gay Tehrani prince and a nymphomaniac rock starlet fall in love within the hustle and bustle of Madrid, surrounded by interlocking stories of passion, sex, and rock ‘n roll.

Just two years after his messy but promising debut with Pepi, Luci, Bom, Pedro Almodóvar proved with Labyrinth of Passion that his early period of trial and error would be like no other. Although he wouldn’t achieve true greatness until 1987’s Law of Desire, all the ingredients that he would use throughout his career can be found in Labyrinth.

Although the plot is certainly more lucid and coherent than Pepi, Luci, Bom, Labyrinth takes frequent breaks from juggling its sixteen or so characters to indulge in a prolonged exploration of the fashion and music of Almodóvar’s Madrid (including two extended cameos of the director himself, alongside musical collaborator Fanny McNamara) Frankly, it’s not compelling filmmaking, but it’s a fascinating cultural document that helps you understand exactly where the man and his unique approach to cinema came from.

But even if it’s not on a whole one of his masterworks, Labyrinth of Passion shows an astonishing vertical leap in Almodóvar’s sense of style. Although his increased budget was still relatively small, he found much more freedom in creating a universe filled with bold colors and retro pop art designs. It’s a beautiful-looking movie, bursting fully formed from the visual imagination of an aesthetic genus.

And it’s damn funny. Almodóvar’s fast-talking, effortlessly cool characters deliver incredibly clever dialogue as if it were the easiest thing in the world. It’s a loving, hilarious portrait of a world burgeoning with life, and even though it’s still a bit slapdash and all-over-the-place, it’s a wonderful showcase of exactly what the young director was capable of. 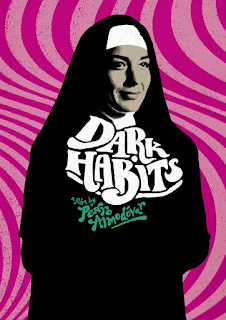 A heroin-addicted nightclub singer takes refuge in a convent, which is run by nuns who turn out to be just as sinful as she is.

Dark Habits contains the seeds of just about everything that would come to define Almodóvar’s alter work. Absurdly casual kink and blasphemy, loosely scripted melodrama with a pinch of ironic comedy and an enclosed world dominated by a group of diverse women.

It even features many key players who would come to define his key ensemble: Consummate cranky mother Chus Lampreave (as Sister Rat, who secretly writes porn in her spare time), 80’s muse Carmen Maura (as the bongo-playing Sister Damned, who cares for the convent’s pet tiger), The Flower of My Secret star Marisa Paredes (as the pious Sister Manure, who physically punishes herself every chance she gets and takes LSD to get hallucinations of the divine), the matronly Julieta Serrano (as the heroin-addicted lesbian Mother Superior), and All About My Mother heavy-hitter Cecilia Roth (as Mercedes, a drug-dealing former nun).

Unfortunately Dark Habits is mostly defined by those iconic Almodóvar qualities that it lacks. Aside from Serrano and Lampreave, the other ensemble actresses play very minor pars, and the crux of the plot lays on the shoulder of Cristina Sanchez, the wife of the producer. Although she played minor roles in Almodóvar’s two previous films (as “Bearded Lady” and “Eusebio’s girlfriend”), it’s obvious he didn’t find an inspiring figure in her as a lead, and the film’s emotional center is lopsided because of it.

Also, the technical quality here is extremely poor. Almodóvar was still building up his mastery of film aesthetic (which begins to rear its head a the party setpiece in the third act), but the kinks he had to work out include such major factors as sound and cinematography. There are entire scenes that are incomprehensibly muffled, and though he has fun with lighting during his chapel scenes, not even the most forgiving viewer would find the camerawork comparable to Bad Education, or even Law of Desire, which came a mere four years later.

It’s fine to spend time with these charming nuns, but the melodrama never coheres into a legible whole (entirely new plot developments are still unspooling five minutes from the end) and it’s a little too long for such a meandering hang-out movie. I love me some nuns gone wild, but an Almodóvar half a decade later could have made something much more moving and satisfying out of this very same premise.

What Have I Done to Deserve This? 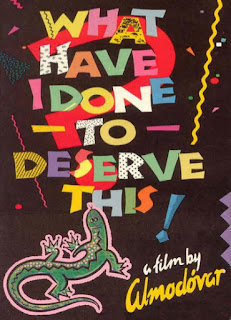 What Have I Done to Deserve This? (aka ¿Qué he hecho yo para merecer esto?, which is not any easier to type) is the worst Almodóvar film I’ve ever seen, and I’ve seen all but four at the time I’m writing this. It’s the only one I’ve considered giving a score that isn’t even marginally positive, but as I was flipping through my notes I realized something. This movie is freaking hilarious.

The big standout is Chus Lampreave (playing essentially the same role as her peak performance in The Flower of My Secret, in which she’s lucky enough to get to play off the incredible Rossy de Palma, who the Almodóvar ensemble acquired in 1987). Her batty old mother schtick never gets old, but she has some especially sharp moments here, and her relationship with a lizard she finds in a park might just be the emotional lynchpin of the entire film.

And although Carmen Maura is limited by her character being the center of the “tragi-“ half of this tragicomic film, she still brings a blustery detachment to some of the director’s kinkiest scenes yet that makes them even funnier. You can’t not giggle as she makes a quick buck by sitting next to an exhibitionist going at it with her prostitute neighbor, still clutching the groceries she walked in with, bored out of her mind. And out of all the casual kink of Almodóvar’s early work, nothing can beat the brutally businesslike transaction where she lets her son be adopted by a pedophile dentist because she can’t afford to get him a new crown. It’s dark as hell, but not a single character sees it that way, and that’s the perverse magic of this director, especially during his boundary-pushing Movida period.

So yes, it’s funny. It’s just not much of anything else. The final scenes are incredibly moving, but for the most part the story keeps you at arm’s length, all the while being incredibly confusing. The interlocking story combines autobiographical elements (Almodóvar’s time as a letter writer in his home village is reflected here), vintage kink, a family drama instinct that will eventually pupate into Volver, and a bunch of scattered odds and ends of characters who pretty much amount to nothing (including a telekinetic little girl who should’ve had more than three minutes of screen time), which all jostle for attention in a harried mush.

There are feints toward the cinematic artistry that Almodóvar would truly manifest in Law of Desire, like the lizard named Money who arrives in a time of chaos, metaphorically representing every character’s tangled motivation. But the limitations of the set make this a very static, almost neorealist movie, and that approach is too inherently lifeless to benefit from the director’s particular talents. It’s a noble mess, but a mess nonetheless, and not one that I would feel particularly keen to revisit.