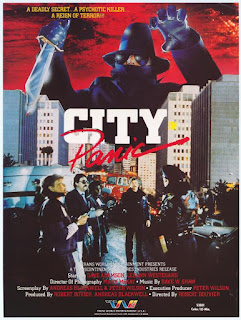 In my non-blogging time, I’ve been doing a bit of a unit on LGBT horror films, for my own personal edification. But as you may have noticed with my Cruising review, sometimes this marathon collides with Census Bloodbath in a delightful and surprising way. This entry was particularly unexpected: on a birthday trip to Amoeba Records in Los Angeles I picked up a copy of the hard-to-find City in Panic because I knew I’d never see it anywhere else. It wasn’t until I read the back cover that I discovered just how thematically appropriate the movie was.

You see, the film’s original title was The AIDS Murders. It’s not something that inspires much confidence in the subject matter, but it’s the first contemporary horror movie I’ve seen that directly and explicitly referenced the AIDS epidemic of the early 80’s that claimed the lives of many members of the gay community. It certainly wasn’t a sensitive document, but it was a document nonetheless, so I was eager to see what it had to offer. 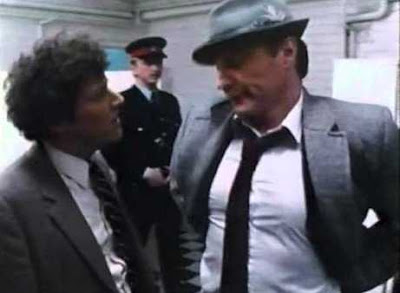 Being a forgotten 80’s slasher, the answer was – as usual – not much.

City in Panic takes on a format we’ve seen in many a slasher before and since. Just like the protagonists in Don’t Answer the Phone, The Texas Chainsaw Massacre 2, and Psycho IV, Dave Miller (David Adamson) is a radio host. His controversial talk show, Speak Up, has mostly been used to criticize alarmist journalist Alex Ramsey (Peter Roberts), as he details the exploits of a serial killer who has been terrorizing the city and putting it in the aforementioned panic.

While Dave and his guests endlessly discuss the killer’s motivation and society’s role in fostering it, gay men around the city are being stabbed to death. The murderer, known only as M (named after the Fritz Lang film from which they draw inspiration, an unusually deep cut for a sleazy slasher) seems to be targeting people suffering from AIDS. While these killings go on, we also follow Dave through his depressing bachelor life. Of the three or four interchangeable blonde women he interacts with, the one we spend the most time on is Liz (Lee Ann Nestegard), an ex who is now Alex Ramsey’s assistant. 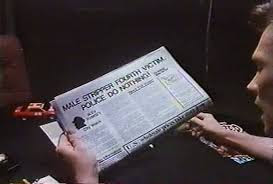 Will that cause friction between them? And does anybody care?

The foremost takeaway from City in Panic is that they have no clue how AIDS worked or how to properly represent it. To be fair, I’m not certain if the difference between HIV and AIDS was widely known in 1986, but City in Panic certainly is not aware of the distinction, characterizing the disease as a sort of cough that makes you a little pale. The only remarkable thing about this representation is that it acknowledges that women can suffer from AIDS as well, and other than a cop who flies off the handle in literally every second of every scene he’s in, the characters aren’t particularly homophobic. So that’s a start.

Unfortunately, in spite of its Canadian pedigree, City in Panic doesn’t boast much that separates it from the pack of low-rent, mid-80’s cheapies. And what little there is quickly falls away after the first couple of scenes. The first murder is literally a shot-for-shot recreation of the Psycho shower scene only with a male victim, which is a pretty brass-balled way to open a film, and the killer is reasonably giallo-esque, cutting a sleek silhouette with a face-obscuring black hat and matching cloak. But the more plot-oriented the film gets, the further it falls into the gutter.

It’s not like the semi-stylish murder sequences are the work of a master (they’re ineptly cut, keeping the gore offscreen so demurely that the geography is completely inscrutable), but I’d much rather rewatch the scene where a man is slashed to death while doing upside-down situps on a pull-up bar than slog through a single one of the film’s copious, dire dialogue scenes. For one thing, the sound designer is trying this fun experiment to see how long a viewer can physically keep paying attention while every line of dialogue is drowned out by keening music, background sirens, or even just some particularly robust white noise. For another thing, the script is incredibly repetitive and tedious to begin with. 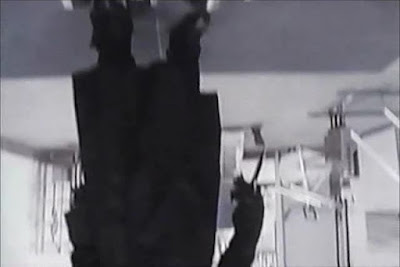 I really feel like I should earn some sort of medal when I complete this project.

Occasionally, the ineptitude of the cinematography accidentally stumbles across something strange and exciting, like the way the camera will suddenly take on a character’s POV, bursting into motion with an impressively fluid dexterity. But mostly we end up with eyesores like the impressively ugly extended close-up of Dave’s mouth during a recording or the reeeeeally slooooooow sex scene that moves practically one frame at a time like a slide show.

Considering the sociopolitical context City in Panic is taking the time to explore, its poor construction wouldn’t necessarily be a dealbreaker. Unfortunately, it just seems to be an inept cash-in on a tremendously important social issue. It’s not deeply offensive like it easily could have been, but it’s still a misinformed waste of time. The occasional bursts of creativity (or at least absurdly brave plagiarism) are beaten down by every other element, which work in tandem to make City in Panic a deeply disappointing experience, even if it’s not quite as execrable as some of the worst entries in the genre.

Killer: M [Liz (Lee Ann Nestegard)]
Final Girl: Dave Miller (David Adamson)
Best Kill: A security guard gets stabbed in the dick through a  glory hole.
Sign of the Times: At one point, Dave plays with one of those remote control 80’s robots that I wasn’t certain actually existed.
Scariest Moment: The killer envisions Dave as an AIDS-riddled monstrosity clutching a skeletal baby.
Weirdest Moment: A hamfisted attempt at comic relief sees Dave’s producer write “M” on a piece of paper, but wackily hold it upside-down so it says “W.”
Champion Dialogue: “Haven’t I got enough problems with alimony, the cops, and now you?”
Body Count: 6; not including two victims killed offscreen and mentioned in a news report.
TL;DR: City in Panic isn't as crude and offensive as the concept promises, but it's also not much of anything.
Rating: 3/10
Word Count: 1095
Also sprach Brennan at 8:49 AM