Here is another trio of reviews on Pedro Almodóvar films, as we enter our final summer marathon of his collected filmography. 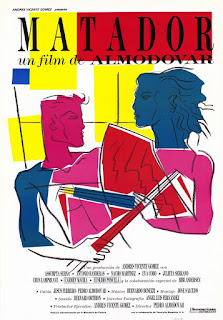 Matador is one of Almodóvar’s weirder movies, and that’s really saying something. It’s kinky, edgy, and dark in ways only his early 80’s output could be. He was still exploring his craft, and there was certainly still room for improvement, but his inimitable voice still rings loud and clear.

For one thing, this tale of rape, murder, suicide, and necrophilia is hilarious. The A-plot is as straight as a drama can be, but it bounces between a litany of buoyant performances on the sidelines: Julieta Serrano as the pious, bullying mother of Antonio Banderas, Chus Lampreave as the doting, oversharing mother of the model he assaults in an early scene, and even Pedro Almodóvar himself, in an uncredited cameo as a fashion show director. Their antics and complete lack of self-awareness allow Matador a levity that prevents the subject matter from becoming too unbearably dark.

And despite its lack of the bold color patterns that would come to define the director’s work, Matador is beautiful on top of everything. The opening scene in which bullfighting is compared to seduction numbers among the director’s most sublime visual sequences. Unfortunately, this level of cinematic perfection fails to sustain itself, and in turn is incapable of keeping the messy plot on life support. It’s still a delightful slice of filmmaking, but it overstays its welcome, something that almost no Almodóvar movie is capable of doing.

The Flower of My Secret 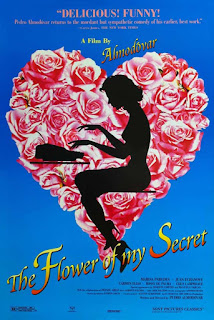 
A romance author can’t find inspiration now that her marriage is on the rocks, and takes a newspaper job where she has to review her own novel.

The Flower of My Secret is definitely a middling Almodóvar work, from his period in the early 90’s that people don’t like to talk about quite so much. Nevertheless, if any other director had made it, it would be considered the peak of their career. That’s the kind of sliding scale we’re working with when we discuss Almodóvar, and that’s a glorious thing.

As far as I can figure it, there are only two things “wrong” with The Flower of My Secret. First, while Almodóvar’s plots do tend to meander, this one really gets away from him, especially in the third act. The movie is short enough that the messy plotting isn’t exhausting, but it can be a bit difficult to really sink your teeth into it. The second thing is that the film is just plain. The director’s retro, eye-searing colors and bold set design choices are rather toned down here, so there are no images immutably burned into your brain.

Those are the reasons it’s not a classic Almodóvar film. The reasons it’s a great Almodóvar film are numerous. For one thing, it’s downright hilarious. The plot beats are reserved for some heartstring-plucking melodrama, but some of the film’s many detours find their way into character-based joviality, with dialogue slipping over itself in a beautiful farcical frenzy. This reaches a particular height whenever our protagonist visits her mother and sitter, played by Almodóvar stalwarts Rossy de Palma and Chus Lampreave. Lampreave especially takes what she was working with in Matador and turns it up 11 as a batty, headstrong aging mother stock character given warmth and depth around the edges of her irresistible performance.

The melodrama is also well-crafted, anchored by the terrific Marisa Paredes, who joined the Almodóvar troupe in the early 80’s, but really rose to the top of the heap with his 90’s material. The scene of Paredes seeking comfort from the women in a knitting circle in her hometown is worth the price of admission alone. Paredes suffers a lot, but Almodóvar uses her trials and tribulation to celebrate life, love, art, beauty, and especially women of every shape and size. 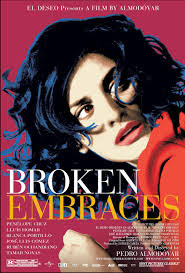 
A blind filmmaker revisits a tragedy that struck 14 years ago while he was directing his final film.

Broken Embraces is definitely a Pedro Almodóvar movie. If ever you see a lush melodrama filled with gorgeous women and mop-headed twinks boasting an ending that makes you go “oh, that’s all?,” he is surely behind it. A lot of his favorite themes are present: a death setting a chain of events in motion, an artist finding catharsis through their craft, Penelope Cruz looking gorgeous as all hell… It’s definitely in his drama vein.

Frankly, Almodóvar’s dramas don’t appeal to me nearly as readily as his comedies, but broken Embraces struck me more than most of the others. There’s a quiet beauty in this reflection on a long, full career. And the autobiographical elements are hardly veiled, considering that this character is in the middle of making a fictionalized version of Women on the Verge of a Nervous Breakdown. The only difference is that this version (titled Chicas y Maletas) is kind of a disaster whereas Breakdown is a stone-cold masterpiece.

Like most of his dramas, Broken Embraces is a technical triumph. From the detailed production design to Cruz’s platinum blonde wig so fierce they had to call in animal control, every item in the frame is perfectly composed. All the better to let the emotions of the story spill out around it. Frankly, I can’t find that much unique to point out, because it’s exactly as sublime as his other efforts. I should really step back and appreciate how lucky I am to be able to take this film’s craft for granted, but the sad fact is if it’s not Volver, then I’m just not as invested.