This week we’re anticipating Despicable Me 3, the third entry in a franchise about three girls who are adopted by a single dad who turns out to be a supervillain. In honor of this, we’ll be reviewing a 1987 film with one of cinema’s all-time Bad Dads: The Stepfather. 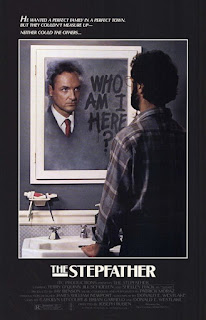 As you get deeper into horror fandom, as I have (if I go any deeper, you might never see me again), you discover that there exists entire worlds of cinematic ephemera around the edges of public consciousness. People generally know their way around the Friday the 13th or Halloween franchises, but it’s not until you take the plunge that you learn that there were three sequels to Psycho, or an entire trilogy of Slumber Party Massacre movies. But even with this insider knowledge, I’m constantly shocked when I remember that (including the remake), there are a whopping four Stepfather movies. Even more shocking, I’d never seen any of them. Well, that’s about to change. 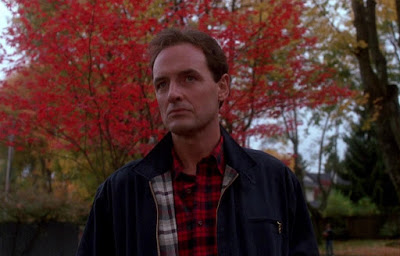 What a service I provide for you. You’re welcome.

In The Stepfather, teen girl Stephanie (Scream Queen extraordinaire Jill Schoelen, whose candle burned bright in this, Wes Craven’s Chiller, Cutting Class, Curse II: The Bite, The Phantom of the Opera, Popcorn, and When a Stranger Calls Back, all between 1985 and 1993) has some problems. She’s been getting in trouble at school after the death of her father, and even worse, her mother Susan (Shelley Hack of Troll) seems to have completely gotten over it, thanks to the new man in her life. That man is the titular Stepfather Jerry Blake (Terry O’Quinn of Lost), whose Ward Cleaver-esque appearance and attitude disguise the fact that he’s the very same man who murdered his entire family in a nearby town over a year ago. He loved them… But they disappointed him.

Steph begins to grow suspicious of Jerry’s odd behavior, and attempts to find out the truth about him. Meanwhile, the brother of his previously deceased wife, Jim Ogilvie (Stephen Shellen of American Gothic), works to track down his sister’s killer, who he rightly suspects has taken up residence nearby. In the parlance of the meta-slasher Behind the Mask, Jim is this movie’s Ahab, a vengeful force for good who is inhumanly dedicated to stopping the evil, á là Dr. Loomis in Halloween. These characters are almost universally hilariously incompetent. 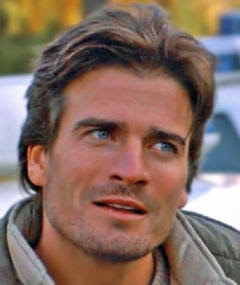 At least this one is handsome.

Let’s get the unpleasant business out of the way first: The Stepfather is hardly a slasher film. The body count is almost lower than Weekend at Bernie’s, and there is no focus on gore or creative kills. However, this doesn’t disqualify it from Census Bloodbath. Much like the terrific 1981 thriller Road Games, The Stepfather is a micro-slasher, expanding a tiny stretch of time and one particular set of victims from the overarching career of a serial killer. He’s presumably killed many people before the events of this film (it’s even heavily implied that he may have killed Stephanie’s dad), but we’re focusing in on one leg of a long journey.

Anyway, what The Stepfather is instead of a slasher film is a family drama mixed with a Hitchcockian thriller. The audience is immediately aware of Jerry’s homicidal tendencies, so the thrills are drawn from the dance between him and Steph as she comes closer and closer to discovering his true identity. Personally, I might have preferred it if there was even a scrap of doubt about his true intentions, but it’s at least amicably creepy.

The only real problem with The Stepfather is that it feels deeply generic. The central conflict is a game of cat and mouse that has been played over and over again in many a psycho thriller, and they don’t do much to spice up the affair. In fact, the movie seems to think that its thrills and chills are such a lock that they don’t really have to try all that hard for the story to make sense. Side characters teleport out of nowhere halfway through the film and nab a handful of scenes only to vanish without consequence, while main characters are often sequestered offscreen so long you almost forget they exist. It’s a haphazard construction that doesn’t offer a lot to support the film’s decently affecting atmosphere.

It's more like "No, seriously, who is this guy?"

Occasionally, those random shards of subplots and side characters coalesce into something truly delightful (a go-nowhere flirting scene between Jim and a Barb-esque secretary is inexplicably lovely, and the scene where he’s canvassing the town and accidentally walks in on the middle of a marital argument is excellent at implying a bigger world around the film), but there’s no real sense of intentionality to the film’s randomness.

The scene that’s most symptomatic of The Stepfather’s total lack of a coherent identity is a shower scene that comes absurdly late in the game. With less than 20 minutes left, Jill Schoelen is shoehorned into the bathroom to bare her breasts and stop the plot dead in its tracks, in a film that at no point has otherwise indicated it wants to be a cheesy, exploitative slasher.

Fortunately, Terry O’Quinn is enough of a magnetic personality to hold the whole thing together. Watching him slowly unravel is truly remarkable, providing a certain skin-crawling otherness in a movie that’s mostly just a bland thriller by numbers.

The Stepfather is certainly one of the more stately entries in the genre, but that’s not always a good thing. It gives you a couple moments to cling to, but otherwise it’s entirely forgettable.

Killer: Jerry Blake (Terry O’Quinn)
Final Girl: Stephanie (Jill Schoelen)
Best Kill: There’s really not a lot to go on here, but I’ll pick Jim’s death, which happens pretty much immediately upon encountering Jerry, proving pretty definitively that Ahab character suck at their jobs.
Sign of the Times: Steph has to mail a letter to the newspaper asking for a photo of the killer, because she can’t just Google it.
Scariest Moment: The Stepfather loses his grip and accidentally uses the wrong name with Susan, revealing his deception.
Weirdest Moment: On his way to save Jerry’s family, Jim has to stop to let a nun cross the street.
Champion Dialogue: “Girls don’t get expelled.”
Body Count: 3; not including the family that is murdered immediately prior to the opening scene.
TL;DR: The Stepfather is a respectable but non-essential slasher adjacent thriller.
Rating: 6/10
Word Count: 1161
Reviews In This Series
The Stepfather (Ruben, 1987)
Stepfather 2: Make Room for Daddy (Burr, 1989)
Also sprach Brennan at 7:31 AM