Folks, today marks the fourth anniversary of Popcorn Culture, and it’s amazing we all survived this long, let alone this little blog. Now, our good friend Hunter over at Kinemalogue started on the exact same day, so I want you to head over there and give him a little love. Our blogs are fraternal twins, after all. In celebration of this landmark, and in honor of the traditional fourth anniversary gift being electrical appliances, I have a little list prepared for you.

#5 TV Set in A Nightmare on Elm Street 3: Dream Warriors


The boob tube gets a bad rap. It might turn your eyes square and your brain into mush, but at least it won’t murder you… unless you’re in the nightmarish thrall of Freddy Krueger. This TV kill is one of the most iconic Elm Street scenes ever, and for good reason. It’s pithy, playful, and yet still unspeakably dark in its absurdity.

#4 Microwave in The Last House on the Left


The Last House on the Left remake was altogether much less grim than Wes Craven’s original, but that also allowed them to go to some incredibly silly places that even the intermittently goofy 1972 flick couldn’t reach. The highest peak of this bonkers attitude is this scene that brings a popular urban legend to bloody life: death by having your head shoved into a microwave. 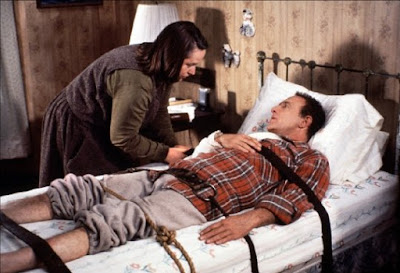 Is a lawn mower an appliance? I’m not actually sure about that, but who could resist Annie Wilkes’ inimitable gusto and the creative way she dispatches one of her captive’s only means of potential survival? [Editor's Note: OK, I'm dumb. This scene is in the book, not the movie. But it's still great.] 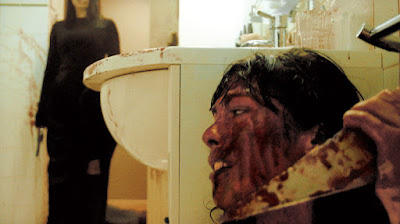 Inside is a bleak, incredibly gory movie, but one of the scenes that has the most impact is this little moment of blunt force with a toaster. It’s a startling gag that’s so abrupt you want to giggle, but quickly devolves into full-fledged horror.

#1 Blender in You’re Next


You don’t get to be one of the best new horror flicks of the decade without an awesome kill scene, and You’re Next is chock full of them. One of the most memorable is the incredible denouement where our heroine demonstrates the incredible versatility of a common household blender.