In which we catch up with two delightfully queer films I watched an embarrassingly long time ago.

To Wong Foo, Thanks For Everything! Julie Newmar 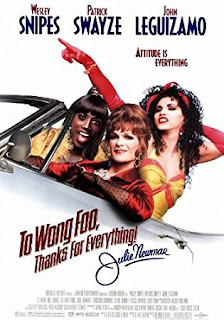 Three drag queens on a road trip break down in a small Southern town and befriend the local ladyfolk.

It is an absolute miracle that To Wong Foo, Thanks for Everything! Julie Newmar got made in the first place. Obviously it owes its existence to that other drag queen road comedy with an overwhelming title The Adventures of Priscilla, Queen of the Desert, but the fact that this movie got made in late 90’s America with this caliber of onscreen talent and that it didn't turn out to be an unholy mess is something that makes me ant to fall to my knees and weep in gratitude.

First and foremost, To Wong Foo doesn’t treat its drag queen protagonists with kid gloves. It takes the fact that they’re gay men who dress up like women for granted, and though it’s a bit of an indulgent fantasy in terms of how often they’re in drag during their daily lives, their personalities and conflicts aren’t defined by their proclivities: Patrick Swayze’s Vida is a bit too prim and controlling, but has a warm, gregarious nature as a shield against her cold upbringing. John Leguizamo’s standout character Chi-Chi just wants to be loved, but her fierce stubborn nature gets her in hot water. And Wesley Snipes’ Noxeema needs to learn to open her heart after sending so long closing it off from the world.

Its depiction of the inhabitants of a small Southern town as hopeless yokels who need to be save by urban sophisticates probably isn’t quite so tender and realistic, but really: who needed the representation more? And they’re treated with just enough respect and autonomy that it’s easy to ignore their more cartoonish nature. Regardless, To Wong Foo is a cartoonish comedy, dazzling audiences with gleeful, glitzy camp magic.

It’s uncompromising in its queerness, and that leads it down a road to letting comedy develop naturally from its characters. Is it the best comedy in the world? No, probably not. But a charming and character-driven rote comedy is nothing to thumb your nose at, especially when those characters are so far outside the usual sphere.

The best thing To Wong Foo has to offer is its cast, who justify every predictable beat in the plot and ground their tomfoolery in something real and true. That goes for the Southerners as well, though Leguizamo, Snipes, and Swayze are doing most of the heavy lifting. With or without its prematurely progressive values, To Wong Foo is a delightful romp, and I am supremely glad it got made.

The Skin I Live In 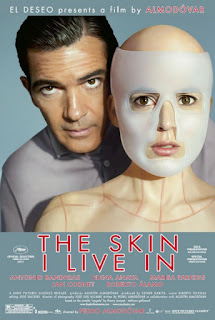 Pedro Almodóvar’s filmography has been aggressively, transgressively queer from square one. Hell, his debut film Pepi, Luci, Bom features a housewife casually getting peed on by a punk rock teenager. He’s not afraid to bring radical ideas into his filmmaking, and The Skin I Live In is the first time he has brought his unique sense of melodrama to the horror realm, or at least as close as any of his amorphous films have ever gotten to inhabiting a single genre.

The Skin I Live In is basically a decades-later progression of his earlier film Tie Me Up! Tie Me Down!, in which Antonio Banderas also played a captor hopelessly in love with his victim. Where that film may have been even more transgressive by giving the characters a sweet ending, The Skin I Live In leans into the more terrifying aspects of the thing, doubling down on full-tilt body horror.

Although it’s tremendously effective at creating a sense of creeping unease, The Skin I Live In is probably Almodóvar’s least visually stimulating film to date. He still retains his effervescent attention to detail in his production design but the stark, sterile color palette mutes his personality a little too much. It’s a very cold film, which works for its storyline, but also makes it just a little less accessible. And accessibility has never really been the man’s strong suit.

It’s very European, frankly, which is has every right to be. But if you’re not ready to approach it with your brain turned on at full power, you’re probably not going to like it quite as much. However, that can hardly count as a criticism. The Skin I Live In will chill you to the bone if you let it, and I certainly have.