Popcorn Kernels: Knight Of The Demons

In which we review two demon-related films covered on the Scream 101 podcast.

Tales from the Crypt: Demon Knight (Listen to the Scream 101 episode right here.) 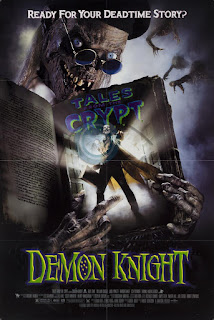 A secluded New Mexico motel is besieged by the demonic forces of The Collector, guarded only by an ancient knight armed with a holy key imbued with the blood of Christ.

Demon Knight was the first of an intended trilogy of feature films meant to bring Tales from the Crypt to the silver screen. They only squeaked out two (and a half, if you consider the years-later dribble Ritual) before they collapsed panting to the sticky, popcorn-covered floor, but it’s a damn shame it had to happen that way. Demon Knight is a film that effortlessly capture’s the show’s effervescent celebration of the macabre.

Even better, it kicked things up a notch. Anthologies and especially TV horror tended to rely on EC comics pastiche and morality plays to be just creepy enough to be memorable, but not so intense they wouldn’t appeal to younger audiences and network executives. Demon Knight still has that general, safely spooky atmosphere about it, but it’s far from toothless. When Tales from the Crypt graduated from the constraints of TV, it leaned into the curve so far that its spine snapped. Demon Knight has great fun wallowing in nudity and absurd sexual references, but where it really shines is its balls-out commitment to gooey, gory special effects.

The rise of the demons arrives in a spectacular effect that rivals Frank’s gory resurrection in Hellraiser, and the periodic bursts of violence that pepper the film are visually inventive grotesqueries that will delight the senses of gorehounds without pushing things too far past the mark where normal civilians can still stomach it. Even the non-violent scenes showcase spectacular effects, including a ghostly seduction where a woman’s lip shows the imprint of an invisible thumb as her tear is flicked away.

Demon Knight might not have much in the way of a story (it’s a typical Romero-esque tale of trapped people turning on each other in a crisis), but it more than makes up for it with that full-tilt approach to the genre and an immortal sense of fun. Plus, at its center is a truly glorious villain performance from Billy Zane. He is the gleefully deranged beating heart of Demon Knight, perfectly capturing the tone by creating a sly, cunning character who’s the charming face of pure evil, part slick con man, part unhinged demon.

Come on, this is a movie full of Crypt Keeper puns, dripping bodily fluids, electroshock sex, and a dude getting punched with a severed head. It is like taking a long, luxurious bath in the best, craziest horror tropes ever concocted. It’s a downright blast, and I recommend it heartily.

Night of the Demons (Listen to the Scream 101 episode right here.) 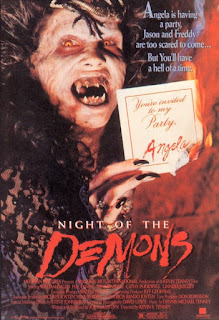 Night of the Demons has the perfect 80’s B-horror setup, and it just barely doesn’t squander it. Although the dialogue in the opening act is pretty sharp, it’s hampered by a lousier-than-usual slate of performances, some gratingly tinny sound design, and a complete lack of atmosphere that does nothing to hide the cinematography’s blatant rip-off of The Evil Dead.

But when the demons kick it into high gear and Steve Johnson’s special effects take their rightful place at the helm, nothing else matters. The plot is so thin a slight breeze would rip it away, but the revolving carousel of showstopping FX sequences is a spectacle not to be missed. A personal favorite of mine involves the reliably naked Linnea Quigley devouring a tube of lipstick in a flawless, obscene moment that holds up perfectly and creates an effortless atmosphere of the uncanny.

They don’t save what is honestly a rather boring motion picture, but the twisting and writhing effects provide Night of the Demons with an unassailable cult status. It’s notable for having the black character actually survive the night, but its final girl is bland, and the waning energy of the 80’s can really be felt in full force. It’s a bit sad, really: a film that deserved better but came out too late to be of any real use.