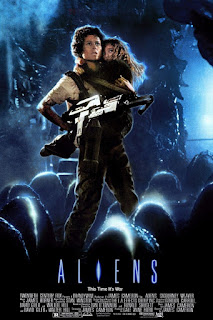 This October, I watched Ridley Scott’s 1979 sci-fi/horror classic Alien for the very first time, which sparked the gestation of this marathon I’m about to embark upon. But, like most people born after 1983, the first film in the franchise I ever watched was James Cameron’s seven-years-later sequel Aliens. So we’re kicking off this exploration of a franchise that’s mostly new to me with a revisitation. I’d say  resurrection, but we’ll have to wait until 1997 for that. I haven’t caught this flick in over a decade, so I was definitely excited to give it another look. 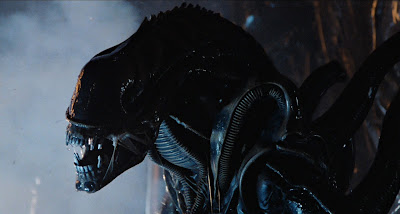 You could say I was slavering at the jaws.

In Aliens, Ellen Ripley (Sigourney Weaver), the only survivor of the Xenomorph attack on the starship Nostromo, has been drifting through space in cryosleep for 57 years. When she is found and awakened, she learns that the Weyland-Utani corporation has built a colony on LV-426, the very planet where her crew discovered the deadly creature. She is strong-armed by corporate stooge Burke (Paul Reiser) into joining a crew of marines bound for the planet after the company loses contact with the colony.

When they get there, they of course discover that the colony is decimated and turned into a hive for the hideous aliens. Flanked by the handsome and capable Corporal Hicks (Michael Biehn), the cowardly braggart Private Hudson (Bill Paxton, may he rest in peace), the half-trusted android Bishop (Lance Henriksen), and the fiery badass Private Vasquez (Jennette Goldstein in brownface, oh me oh my), Ripley must fight off the aliens, escape the planet, and protect the colony’s only survivor: a little girl named Newt (Carrie Henn). 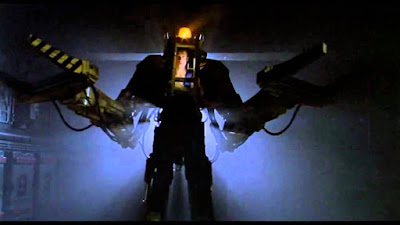 Get away from her! Please?

Aliens (especially in its overlong director’s cut) is actually structured a little bit like James Cameron’s later epic Titanic. The first half focuses on character drama that’s a wee bit too thin to sustain itself, before crumbling entirely in the face of a showstopping, groundbreaking special effects spectacle. There’s a very clear division in the middle too, as the Xenomorphs don’t appear onscreen until at least the hour mark (I clocked the director’s cut at 1 hour, 13 minutes). The first half is far from bad: it features a Sigourney Weaver with seven more years of experience under her belt (it shows) and a crew of mostly likeable, if interchangeable marines. Plus, it stays true to the trauma Ripley would be feeling as a survivor while it sets up a spooky little locked-room mystery in the empty colony.

But there’s no way any of that could compare to the triumphant return of the shiny black, relentlessly phallic H. R. Giger monstrosities. Although the first two or three scenes with the Xenomorphs (a shootout, a car chase, and an offscreen siege) do highlight the limitations of the special effects by showing only one or two aliens at a time in quick flashes and nudging them out of frame every chance they get, every sequence improves on the next until it becomes a pulse-pounding hailstorm of fire, bullets, and shards of black carapace.

And they saved the best for last. The alien queen, with her translucent crystal fangs, gargantuan bulging egg sac, and stories-high crown of spindly ridges, is a masterpiece of terrifying excess, a worthy foe for the hard-nosed survivor Ripley has become. She’s also an excellent foil for the film’s themes of femininity on attack, two sides of the same coin of motherhood. 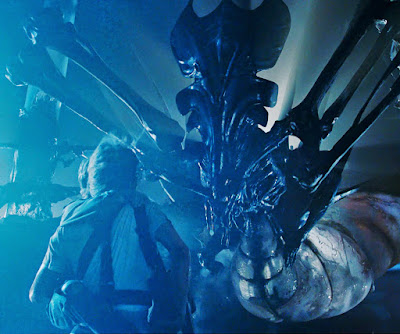 Hail to the queen, long may she reign.

It doesn’t take a rocket scientist to point out that Aliens takes the grindhouse horror villainy of its predecessor and transplants it into an action flick milieu. It’s a military siege movie more than anything: James Cameron’s Saving Private Ryan. Whether or not this makes it better or worse than the original varies depending on how much mileage the war genre has with you. For me, it’s about zilch, but I find Alien to be superior in many other ways, especially how it succeeds in creating and sustaining a mood. Aliens doesn’t have a mood. It’s blustery and loud and awesome, but there’s not quite as much going on beneath the surface.

That’s not to say it’s an unintelligent film. Cameron’s script just puts it all out there and throws subtlety to the wind, which isn’t a wrong way to go about things. It’s just a bit less sophisticated. Which is awesome.

OK, I obviously have conflicting feelings about this, but there’s one thing there is absolutely no argument against: Private Vasquez is a problem. It’s hard to take war scenes seriously when prancing through the middle of them is a white lady who has been dunked in bronzer and is grumbling things about “pendejos.” Jennette Goldstein gives a good performance, but there’s just no excuse for not hiring a Latina actress here. The fakest effect in Aliens should not be one of the human characters, and the racial baggage this forces onto the movie weighs it down like an anchor.

So… Aliens! I guess I don’t want to exit on a down note. It’s a gun sci-fi shoot-em-up romp with excellent production design and explosive effects. Everything here James Cameron has done better in other movies, but as its own entity, it’s not exactly a chore to sit through. It’s one of those films that justifies the practice of making sequels, and I can say as many negative things about it that I want because it will all just bounce off its sturdy ion hull. Aliens is a great movie. Mostly. But it is, and there’s nothing I can do to stop it, nor would I want to.