In which we review two films covered in the month of Scream 101 spotlighting female horror directors.

Near Dark (Listen to the Scream 101 episode right here.) 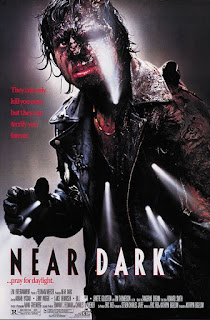 
A young cowboy meets a lovely woman one night, and a charming romance swiftly descends into chaos when she turns out to be a vampire, biting him and inducting him into her murderous vampire family.

I’m not a huge fan of vampires, but one thing I do love about them is the rigid, almost Victorian formality of the rules governing their existence. They can only be killed with a wooden stake. Garlic repels them. They can’t cross a threshold unless they’re invited in. Sure, different interpretations pick and choose the rules as they please, but there’s something fun and engaging about the cat-and-mouse game as potential victims try to manipulate these rules and outwit the bloodsucking monsters.

Near Dark acts in active defiance of the established mythos, a route that can lead a film to some pretty incredible places, but this time prevents any of it from making very much sense at all. Or at least being particularly interesting. The vampire family is characterized well enough (especially Lance Henriksen, who gets the chance to spit some killer dialogue), but there’s no real sense of how this group fits together and what rules govern their existence.

Their Mad Max style combined with the film’s dusty Western aesthetic makes it a cinematic triumph, but on the story level it’s just lacking, for me at least. Perhaps it’s that the struggle of the protagonist is placed on such bland shoulders, or that the slow-paced mood smothers most of the more horrifying elements. But while I see the appeal, this one doesn’t do it for me. 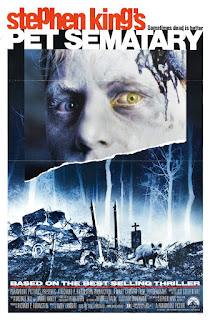 
A man attempts to reverse his family tragedies by using a graveyard that brings the dead back to life, only they tend to come back… different.

Pet Sematary is definitely a B-grade Stephen King novel, so it only makes sense that it would turn out to be a B-grade Stephen King movie. Hey, they can’t all be The Shining. But what pet Sematary lacks in Kubrickian production value, it makes up for with a certain homespun charm. The presence of Fred Gwynne (Herman Munster himself) is a valuable asset as he adds character to anything he even breathes on, but the film also captures a dreamy vision of small-town life that allows the supernatural to organically slip right in.

Unfortunately, just like the film’s hero, screenwriter Stephen King opens the gate to the otherworldly much too far. Instead of presenting a simple, straightforward challenge to the moral fiber of one family man, he bogs down his tale of death and undeath with a psychic child, a helpful Jedi ghost, and the resurrected spirit of a horribly deformed side character. The sheer amount of deus ex machine gimcrackery and vaguely eerie padding prove exhausting at times, and almost always feel completely inorganic to the story being told.

But while King has never been the best editor of his own material, he knows how to call an effortless sense of the macabre into being with a rattling breath, and when Pet Sematary doubles down on the horror, it succeeds. The special effects bringing its gruesome deaths to life (to coin a phrase) aren’t particularly shocking or brutal, but they make up for that with a dripping, tactile motion that twists your stomach like a wet rag. The special effects are more subdued than your average 80’s horror fare, but when they’re called upon they do the job quite nicely.

And in spite of the film’s rather thin characterizations, the cast mostly is up to the task of at least keeping things mildly interesting. Gwynne, like I said, is fantastic, and the 2 ½-year-old Miko Hughes gives an astoundingly impactful performance, both as the soul-crushingly adorable cherub begging to be loved and the demonic entity from the other side. It’s maybe the best horror performance from an actor that young, and it’s strong enough to pick up the slack in a father-son relationship where the father is laying it on a bit too thick.

As a story and as a film, Pet Sematary is uneven, but as a source of atmosphere, it’s a very solid piece of work. The metronomic, oppressive repetition of shots of trucks barreling down the road provides a perfect bass line for the rest of the film, a constant sense of unease and danger that allows the darker impulses to spring forth. It might not be grade-A King, but there are many disparate levels in his bibliography (Duma Key, anyone?), and it earns its silver with aplomb.