Popcorn Kernels: Half Full, Half Empty

Welcome to our newest slate of mini reviews, about a horror-comedy with a plot that contains pretty much everything that exists and a drama that contains almost nothing. 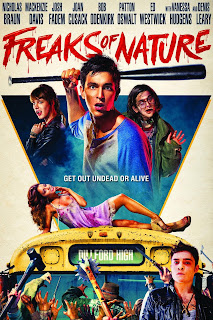 Social tension arises in a town where humans live with monsters when aliens arrive. A vampire, a zombie, and a human from the local high school must team up to save their community.

Right off the bat, Freaks of Nature commits an egregious movie sin. It jams us in medias res into an action-packed scene, then pauses. Whereupon a dopey voiceover asks “How did I get here? To explain that, let’s go back to the beginning.” Now, in the comments of my American Ultra review, friend Hunter argued that several great movies begin this way. I can’t fault him for being right, but since those movies came out, this technique has increasingly been used by lazy filmmakers in cheap movies to get around the fact that their beginning just isn’t very strong.

And boy howdy does Freaks of Nature have a weak beginning. Then again, it has a weak mostly everything. But the intro that dumps a barrel of character actors who have played high schoolers for a dozen years into a pile and halfheartedly develops the world around them while they attempt to untangle themselves isn’t exactly stirring. The worst thing is that Freaks of Nature has a fun, zany concept in fact, the original title was –appropriately – Kitchen Sink), but the lackadaisical treatment it receives from the powers that be is downright discouraging.

If every scene had the subtlety of the moment where zombieism is used as a metaphor for a rebellious teen turning to marijuana, Freaks of Nature would be a post-John Hughes masterpiece. If every scene were as funny as the inexplicable cameo from Werner Herzog, Freaks of Nature would obliterate the competition for AFI’s 100 Years, 100 Horror Comedies list. You can see where I’m going with this. Freaks of Nature rarely rises above the bare minimum requirements to be a film comedy, content to sulk in a low key atmosphere for the bulk of its run time.

Far more frequent than its peaks are its valets. Joan Cusack is wasted in a role that feels like it was written for one of those American Pie spin-offs, the only thread holding up Vanessa Hudgens’ utterly empty performance is the fact that her character is supposed to look high most of the time, and the rules this universe are quickly decimated by a series of deus ex machina throwaway lines. It’s a threadbare slog with an infuriatingly disingenuous ending, supported by character relationships that are held together with scotch tape and chewing gum, in pursuit of a Zootopia-esque moral about tolerance and diversity that completely fails to catch.

It’s all the worse for the fact that this concept with this cast could have really accomplished something great. As it stands, it’s a barely-there trifle that immediately evaporates from your mind upon the closing credits. 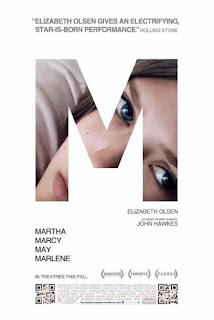 A young woman escapes the cult she has lived in for two years and attempts to live a normal life with her sisters and brother-in-law.

With a title like that, is there any way Martha Marcy May Marlene couldn't be a ponderous indie flick? Hailed as the triumphant debut of the mythical third Olsen sister (the one who could actually act), it made a splash on the festival circuit, much like the similarly dour Jennifer Lawrence showcase Winter’s Bone. If you know my tastes at all, this isn’t exactly a recipe for success.

I did enjoy MMMM, but its glories are fleeting. The film splits its time between a harrowing portrayal of cult life (in flashback) and a harrowing portrayal of reintegration into a society that might be just as flawed, but it’s too distracted by its own seriousness to actually tell a complete, satisfying story. As an exercise in curating atmosphere, it’s excellent, but when they tried to put the narrative gear into drive, they forgot to depress the clutch and stalled the whole thing.

Anyone else here drive a stick shift? No? Just me?

Let’s focus on the cult half. Here we have a dazzlingly intimate portrayal of how a charismatic charlatan (played to the hilt by a leering John Hawkes) can warp weak minds into serving his sick vision. It’s chilling in its naturalism, living in the subtle interplay between human begins rather than relying on some over-the-top, teeth gnashing villain. MMMM knows that the Manson-esque figures that lurk in the shadows of our world deliver their message with sickly sweet honey, killing you with kindness. It’s even more unbearable for its relatability.

Then there’s the other half. Olsen certainly delivers a suitably broken performance, but her sullen deliveries are no match for Sarah Paulson, as a brittle, selfish woman who strives to help her sister more out of a sense of duty than any actual emotional attachment. Her bind subscription to the tenets of society is just as dangerous as her sister’s brainwashed ideals, and her layered performance reveals things to the audience that even her character doesn’t know.

So these, two cloven segments both work on their own right, but they never synthesize into a coherent whole. The stunted narrative is just a carousel of human misery, content not to be anything more. Elizabeth Olsen is bedraggled before and she is bedraggled after, but it doesn’t seem to making a statement through that. It feels like the first act to a much more interesting story, but as it stands it is still a reliably enthralling mood piece.

The experience of watching the movie is somewhat akin to cracking open a Kinder egg and discovering that there's no prize inside. It's a disappointing feeling, but you still have the chocolate so it's not like you can complain. It’s even acceptable despite a soundscape that feels like it was edited on Garageband. Don’t run to your Amazon queue to watch it, but it wouldn’t be so bad if it fell into your lap.